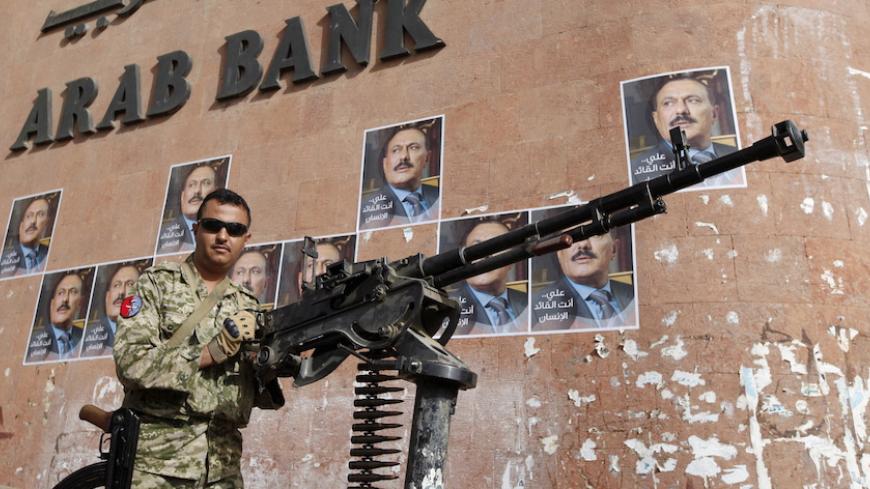 A soldier loyal to Yemen's former President Ali Abdullah Saleh (in posters) holds a machine gun mounted on a patrol truck securing a street near a rally held by Saleh's supporters to mark one year of Saudi-led air strikes in Yemen's capital Sanaa March 26, 2016. - REUTERS/Khaled Abdullah

Impoverished and ravaged by civil war, Yemen has largely turned over its diplomatic activism to Saudi Arabia since its much richer neighbor launched operations to restore President Abed Rabbo Mansour Hadi to power.

The Yemeni Embassy in Washington is headed by Ambassador Ahmed Awad bin Mubarak, Hadi’s former chief of staff. Mubarak was briefly kidnapped by the Iran-backed Houthi rebels in January 2015, and has described the experience as “worse than being killed.”

The ambassador has kept a relatively low profile since taking his post in July 2015, however. Yemen is one of the few Middle East countries that hasn’t hired any lobbyists to advance its interests in Washington, leaving the Saudis and their massive public relations team to handle the media amid rising concerns about the civilian death toll and the political stalemate in the country since Riyadh launched Operation Decisive Storm at Hadi’s behest in March 2015.

In a blow to Hadi and his Saudi supporters, the United Nations’ top human rights official on Aug. 25 revived a proposal to have an international inquiry into possible war crimes by the Saudi-led coalition and the Houthis and their supporters. Congress and the Obama administration have also begun to run out of patience, especially as US arms sales to Saudi Arabia have made Washington a locus of worldwide anger at the operation.

“The Americans determine targeting of every child, residential compound, house, home, shop, market or mosque targeted in this country,” Houthi leader Abdul Malik al-Houthi declared in April 2015. “They determined for the Saudi regime the targets to hit. Then, they supervised and ran the striking operation. Therefore, the Saudi regime is a soldier and servant of the Americans.”

While the Obama administration had been pushing for the resupply of munitions for the Saudi-led campaign despite mounting criticism from some lawmakers over the civilian death toll, the White House may be having second thoughts. For example, the Pentagon sharply curtailed its support for the operation in June, Reuters reported this month.

“The cooperation that we've extended to Saudi Arabia since the conflict escalated again is modest and it is not a blank check," Pentagon spokesman Adam Stump told the news agency. "Even as we assist the Saudis regarding their territorial integrity, it does not mean that we will refrain from expressing our concern about the war in Yemen and how it has been waged."

The United States, however, has recently been beefing up anti-terrorism activities against Islamist extremists — notably al-Qaeda in the Arabian Peninsula (AQAP), which has benefited from the civil war’s chaos. The Pentagon plans to keep a recently deployed small team of special operations forces in the country for the foreseeable future, The New York Times reported in June, in what is described as a “step toward re-establishing a counterterrorism mission that was shut down last year by civil war.”

Through it all, the Obama administration continues to seek congressional funding for programs in the beleaguered country. The State Department has requested $56 million for the fiscal year starting Oct. 1, about a sixth of which ($9.6 million) is earmarked for efforts to reach a political settlement to the conflict.

“The US government remains committed to supporting all Yemenis who strive for a peaceful, resilient and unified Yemen,” the State Department writes in its request for Yemen. “The United States must be fully prepared and resourced to support these goals as soon as opportunities emerge, as this will be a critical time to prevent further deterioration and destabilization and help to create positive momentum.”

Implementing the programs on the ground, however, has proved a challenge. US Embassy staff relocated to Jeddah, Saudi Arabia, in February 2015; two months later, the US Agency for International Development (USAID) put its projects in the country on “full suspension” for a year, Al-Monitor reported at the time.

The United States has also continued to provide humanitarian assistance, although access to the Yemeni population is often difficult because of the ongoing lack of security. Washington committed $327 million in humanitarian in FY 2016, including $189 million announced Aug. 25, just as Secretary of state John Kerry announced a Gulf-backed plan to restart peace talks Yemen with a goal of forming a unity government.

“The contribution will help meet urgent humanitarian needs of the most vulnerable people in the Middle East's poorest and most food-insecure country, as well as Yemeni refugees in neighboring countries,” the State Department said in a statement. “Specifically, the new funding — which will be provided through UN and nongovernmental partners — includes additional food and nutrition assistance to help those suffering from moderate to severe malnutrition, emergency health care, hygiene kits, psychosocial support and access to safe drinking water and sanitation.