The US Treasury sanctioned the senior Houthi leader for "assets confiscated by Houthi opponents." 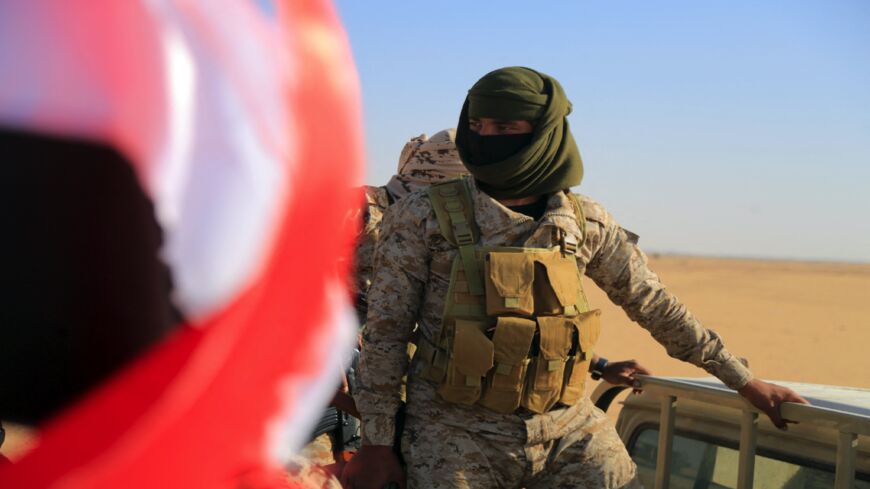 Yemeni army reinforcements arrive to join fighters loyal to Yemen's Saudi-backed government, on the southern front of Marib, the last remaining government stronghold in northern Yemen, on Nov. 16, 2021. The Saudi-led coalition in Yemen said yesterday it has killed over 130 Houthi rebels in the past 24 hours in strikes in and near the northern pro-government bastion of Marib. - AFP via Getty Images

The US government on Thursday sanctioned a senior Houthi military officer accused of helping confiscate more than $100 million worth of property in war-torn Yemen through extortion and other illegal tactics.

Saleh Mesfer Alshaer, who commands the Houthi-controlled military logistics support organization, is considered the “judicial custodian” of assets seized from opponents of the Iran-aligned movement. In a statement announcing his designation, the US Treasury Department describes Alshaer as a close ally of Houthi leader Abdul Malik al-Houthi.

In addition to extorting Yemeni citizens and detaining those who don’t comply, Alshaer has unlawfully forced banks and other businesses to perform withdrawals and identification of customer assets, the department said. The Houthi-controlled National Security Bureau has allegedly detained those who defied Alshaer and falsely branded them as spies.

The Treasury also accused Alshaer of confiscating revenues from projects funded by international organizations inside Yemen, as well as overseeing the diversion and seizure of funds from 35 Yemeni parliamentarians. The department accused his cronies of appropriating revenues from multiple hospitals in the Yemeni capital, Sanaa.

“This campaign of extortion, which was used to fund the Houthi military effort, is yet another example of Houthi actions fueling instability and increasing the already extraordinary suffering of the Yemeni people,” the Treasury Department said in a statement.

“Like the continuing Houthi offensive against Marib, where millions of Yemenis displaced by years of war have fled for refuge, these actions contribute to the severity of the humanitarian situation in Yemen,” the department said.

As a result of Thursday’s action, any assets held by Alshaer in the United States or in control of US persons are blocked, and Americans are generally barred from engaging in transactions with him.

Alshaer was one of three Houthi figures sanctioned by the UN Security Council last week over their alleged involvement in continued cross-border attacks targeting Saudi Arabia and the ongoing rebel offensive on Marib, the Saudi-backed government’s last stronghold in the north. The 15-member body accused Alshaer specifically of assisting the Houthis in obtaining smuggled arms and weapons.

The fighting between the Houthis, who expelled the internationally recognized government in Sanaa in 2014 and now control most of northern Yemen, and the Saudi-led military coalition backing the government has created what the United Nations describes as the world’s worst humanitarian crisis.

International donors have long accused the rebels of interfering with the distribution of food and other supplies, leading the Trump administration to slash assistance to parts of Yemen controlled by the group. The Biden administration restored the funding in March amid pressure from relief organizations who warned the Trump-era cuts would worsen an already dire humanitarian situation.

The blacklisting of Alshaer comes as Biden’s special envoy for Yemen, Tim Lenderking, visited Saudi Arabia and Bahrain this week to discuss concerns over the Houthis’ main patron, Iran, as well as how to advance the UN-led peace process for Yemen. Lenderking was also expected to discuss the Houthis’ detention of some Yemeni staff working for the US Embassy in Sanaa.

A State Department spokesperson told Al-Monitor last week that the Houthis had released the majority of the detainees, but additional staff remained held without explanation. The spokesperson also expressed concern over the Houthis’ breach of the American diplomatic compound, which US Embassy staff had used before suspending operations in 2015.