How Yemen plans to dry up Houthis' funding

Yemen is making major changes in its fiscal operations, hoping to get back revenue sources it says are being hijacked by Houthi rebels. 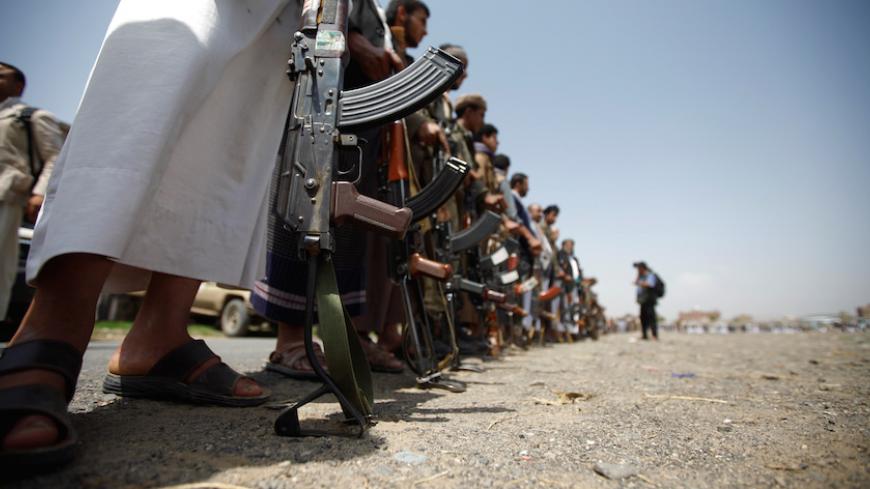 ADEN, Yemen — After years of civil war, the Yemeni government has declared an economic war on Houthi rebels.

Yemen's internationally recognized government, headed by Prime Minister Ahmed Obeid bin Daghr, is shifting its treasury temporarily to the Central Bank branch in Aden, hoping to stem the flow of money he believes is funding the rebel's war efforts. The government's administration moved to Aden when the Houthis took control of Yemen's capital, Sanaa, and the Central Bank there in September 2014.

President Abed Rabbo Mansour Hadi has said the decision doesn't officially mean "a transfer of monetary authority from Sanaa to Aden," but rather means the Central Bank's branch in Aden will be the temporary treasury.

The move is designed to absorb financial revenues from various economic sectors, especially petroleum, and keep the money away from the Houthis and their allies at the Central Bank, who have allegedly tampered with the funds.

The Saudi-backed Yemeni government announced the treasury change July 15 after its cash reserves dropped to $1.1 billion; they had been at $4.3 billion before war broke out again in March 2015.

The decrease in cash reserves started after the failure of an economic truce the International Monetary Fund was overseeing to guarantee the independence of the Central Bank. The government accused the Iran-backed Houthis of breaking the truce and draining the reserves to finance their battles.

The government has called for these measures:

To reinforce these measures, the government succeeded in closing a deal to sell 3 million barrels of oil in the Dhaba Oil Port in Hadramaut by the end of July. The money was transferred to Aden to serve as an operational budget to address the country's energy and fuel crises.

Sharaf Fawda'ey, a consultant at the Yemeni Ministry of Finance, said the measures the government is taking are needed so the state can exercise its political authority to collect its sovereign resources.

"It is unnatural that a central bank, which is a symbol of any state's sovereignty, remains under the control of armed militia that took over power by force and that [operate] it outside the frame of a legitimate state," Fawda'ey told Al-Monitor. He said the new procedures show that the recognized Yemeni government is taking real steps toward stripping the Houthis of their power.

The government controls key petroleum sectors in the governorates of Hadramaut in the east, Shabwah in the southeast and Marib in the northeast. It also receives revenue from customs ports and taxes collected from the areas it still controls. Moreover, it controls the ports of Aden and Mukalla and land crossings such as Wadiah in Hadramaut, which connects Yemen to Saudi Arabia.

Riadh al-Gheeli, a professor at the Arab Academy for Banking and Financial Sciences, said financial revenues from the provinces that the government controls make up more than 80% of the treasury's monetary resources.

"The legitimate government is now controlling all sources of oil and gas in the country, as well as all the main ports except for Al-Hudaydah. Therefore, it can plug the budget gap and finance the war to free the governorates still controlled by the Houthis," Gheeli said in an exclusive interview with Al-Monitor.

The government's efforts could lay financial siege to the Houthis, but they do have other sources of funding, such as customs revenues from Al-Hudaydah, treasury bonds from the Central Bank in Sanaa and the money they are said to have withdrawn from depositors' accounts in local banks.

Gheeli agrees that stopping the flow of money to the Central Bank will help keep the public's money out of the Houthis' hands, but he also pointed out other measures the government could take, such as officially transferring its monetary authority from Sanaa to Aden; making sure international monetary centers stop dealing with the old monetary center in Sanaa; freezing government accounts in all local banks; opening a unified government account in a temporary bank in one of the controlled cities; and replacing current workers in the Central Bank's branches with ones the government trusts.

Yemeni economist Abdelkereem al-Awaadhy told Al-Monitor that the government's procedures "were very late, but following them was a must." Continuing to send revenues to Sanaa would just extend the war, he said.

Awaadhy summarized how much he believes the public treasury has lost over the years. He estimates the total cost of the Houthi insurgency, beginning in Saadeh in 2004 and up until today, is $24 billion, while the cost of the current war since the economic truce failed in March 2015 accounts for $14 billion of that. He emphasized that indirect costs — which include victims; holding off investors; the prevalence of violence, weapons and corruption; and the loss of many of the state's financial sources — cannot be estimated.