Coup attempt could cost Turkey more than military might

Many observers fear that measures to radically reshape Turkey’s once all-powerful military are already affecting freedom there. 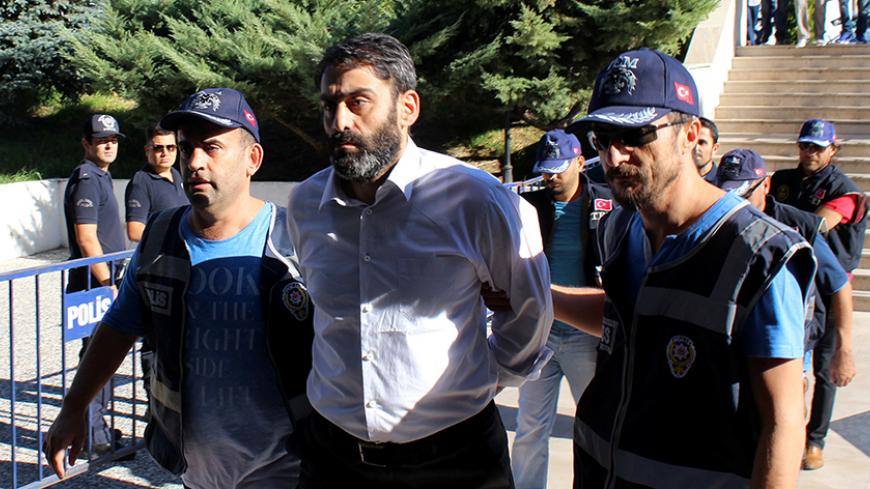 Maj. Sukru Seymen (C), one of the military personnel suspected of being involved in July's coup attempt, is brought to a court house accompanied by police officers and other detaniees in Mugla, Turkey, Aug. 17, 2016. - REUTERS/Kenan Gurbuz

One month has passed since Turkey’s failed coup and many questions remain. Where is Turkey heading now? Will it anchor itself within the family of democratic nations, or perhaps navigate through uncharted waters toward something new?

Turkey has always been larger than itself. With its legacy of an empire that survived centuries and stretched over the most precious real estate of today’s geopolitics, and thanks to its peculiar cultural and religious features, any development Turkey lives through will have ramifications beyond its territorial boundaries.

The failed coup has affected the regional order and the international system as a whole.

Many of the questions asked in the days following the coup, of course, found their answers. However, it is still, to a large measure, shrouded in mystery.

If there is one single thing that is not in in question, it is the culpability of the Gulenists in the military. For President Recep Tayyip Erdogan and his government, there is not one iota of doubt that the mastermind of the bloody plot was his one-time ally, cleric Fethullah Gulen, who lives in self-imposed exile in the United States.

For Erdogan, who emerged from the attempted takeover victorious and seemingly more powerful than ever, the coup was a Gulenist one. Period. As Turkey’s public enemy No. 1, Gulen must be extradited to Turkey if Washington hopes to remain a friend, ally and champion of democracy. Period. For Turks, the attempt was the foiled machination of the Gulenist movement's "parallel state" and the Kurdish nationalist Democratic Union Party (PYD).

No country can allow a parallel state in its midst; therefore came the crackdown, which was unprecedented in Turkish history. It is unprecedented, yet reminiscent of the early periods of the Turkish republic in the 1920s when the founding father of the secular Turkey, Mustafa Kemal (later Ataturk) purged his former allies or any conspirator who could have jeopardized his power and the new republic, which was in its incubation period. That was the birth of a new Turkey from the debris of the defunct Ottoman Empire.

The magnitude of the crackdown and the purges following July 15 could suggest an analogy that a new Turkey under Erdogan is coming to life from the death throes of the former “new Turkey.”

The founding institution of the Kemalist “new Turkey” was the military, which always portrayed itself as “the guardian of the republic” or “the savior of the nation.”

By succumbing to Gulenist infiltration, the military has become the main institutional culprit of the failed coup, and therefore is being subjected to extreme purges and is effectively being dismantled. It wouldn't be erroneous to say that the coup attempt pushed Turkey into a messy and uncertain transitional period — which some might prefer to call a revolutionary situation.

The toll of the purges in just the first few days after the failed coup is daunting.

Prime Minister Binali Yildirim, during a press conference with the editors of Turkish dailies, said that in the month since the coup attempt, 76,597 public servants have been suspended and nearly 5,000 more were fired. Prosecution is underway for 6,792 academic and administrative personnel. About 3,670 judges and prosecutors have been suspended. The government has closed 15 universities, 934 schools, 104 endowments, 1,125 associations and 19 labor unions suspected of having Gulenist ties. More than 130 media outlets — including 16 television channels, 45 newspapers, 15 periodicals and 29 publishing houses, again most of them allegedly Gulenist — have been banned. Around 90 journalists have been detained and 49 arrested.

The Interior Ministry announced that 18,756 of its workers were detained and 10,192 of them were arrested. The government declared a state of emergency July 21 and extended the legal detention period to one month, from three days previously. Therefore, the numbers given above may soar. Every day, new figures are being added.

The crackdown and the purges, in a sense, dismantled NATO's second-largest military force. So far, 157 generals and admirals — which amounts to 44% of those ranks — have been dishonorably discharged, along with thousands of officers and soldiers in uniform.

During the "national struggle" from 1919 to 1922 that culminated in the founding of the Republic of Turkey, the losses in the officer corps were 662 and there was not a single general among them.

Thus, it is safe to say that the post-July 15 purges have become the most devastating blow to the Turkish military and, as a matter of fact, it is no longer NATO's second-largest military in terms of functionality.

Under a decree that went into effect Aug. 17, thousands of people, including high-ranking officials, were expelled from the police force.

The crackdown and the purges involving the military and the civilian security apparatus, notwithstanding to what extent it is necessary in the aftermath of such a traumatic happening as the failed coup, inevitably creates a huge security gap for Turkey, which is already in a dangerously volatile situation, particularly on its southern flank.

Only 99 colonels and generals have been promoted to fill the vacant positions, which leaves the Turkish military with 308 generals and admirals — 50 fewer than before the coup.

“The military as an institution in Turkish politics may never recover," Aaron Stein, a senior fellow at the Atlantic Council’s Rafik Hariri Center for the Middle East, wrote on The American Interest website. In the Aug. 16 piece, he further suggested that Turkey could "remain unstable in the near future, with a less-effective military and bureaucracy.”

Other renowned experts on Turkey have voiced similar assessments. One of them, Chatham House’s Fadi Hakura, wrote July 21, “Turkey’s NATO partners fear that the purges of experienced military and security personnel have the potential to diminish its capability to thwart the threat posed by [the Islamic State] and other militant groups and to better manage its long and porous borders with Syria and Iraq.”

He added, “Sadly, under the best-case scenario, it will take Turkey years, if not decades, to restore a modicum of rule and law and public services’ delivery at [the] pre-coup standards to which the Turkish citizenry have been accustomed.”

Paradoxically, many of the steps taken by the government regarding the military are those that Turkey’s liberal democrats have been seeking for decades. They suffered for advocating strict civilian control over a military with an incurable tendency for coups d’etat.

Following the July 15 coup, Erdogan's millions of loyalists and fans — including more than just a handful of liberal democrats — are applauding the measures the government has taken against the military.

The most confusing part of the story is that the crackdown is directed at every sort of dissent and opposition in Turkey.

I was at a Berlin cafe a month after the coup. I glanced over the fourth page of German daily Tagesspiegel’s Sunday issue. There was a huge picture of Erdogan and a lot of coverage about the situation in Turkey. The following sentence in the introductory paragraph caught my attention:

“The Turkish people are following their President Recep Tayyip Erdogan in admiration while he is dismantling democracy in their country.”

So, is he dismantling the source of the coup — the military — or democracy? They may not be mutually exclusive. Perhaps both are being dismembered simultaneously?

These questions, one month after the coup, await proper answers.

by Murielle KASPRZAK and Joseph SCHMID | AFP | May 26, 2022
END_OF_DOCUMENT_TOKEN_TO_BE_REPLACED