Consultancy firms report a big increase in the number of Turks exploring options to migrate to the West, as the failed coup and its aftermath exacerbate fears over the country's future. 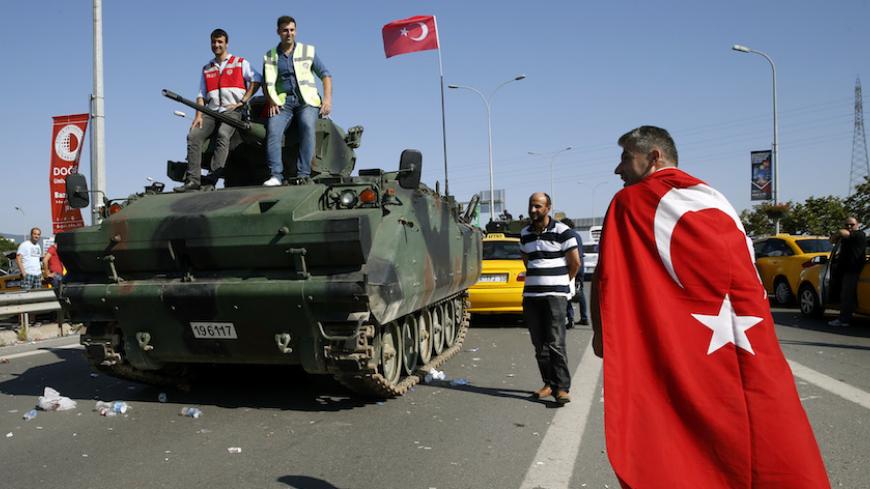 A man wrapped in a Turkish flag walks past a military vehicle in front of Sabiha Gokcen Airport, in Istanbul, July 16, 2016. - REUTERS/Baz Ratner

In early July, President Recep Tayyip Erdogan announced a plan to grant Turkish citizenship to Syrian refugees, saying he had instructed the government to start working on the issue. Several days later on a flight from the NATO summit in Warsaw, he told journalists that Syrians in Turkey, numbering some 3 million, could be offered lodgings built by the Housing Development Administration through a favorable payment scheme of small monthly installments. The plan to naturalize Syrians and lodge them in government-built homes sparked objections from the opposition and civil society groups, with many suspecting that Erdogan had ulterior political motives.

Around the same time, the government had announced another controversial plan — to grant work and residency permits and Turkish citizenship to foreigners who buy real estate in Turkey and pledge not to sell it for five years, who buy treasury bonds and pledge to keep them for at least five years and who keep foreign exchange above a certain amount in bank accounts for at least three years. The plan, an attempt to lure foreign capital, sparked accusations that Turkish citizenship had been “put on sale.”

In a matter of weeks, however, the July 15 coup attempt — which the government blames on the so-called Fethullah Gulen Terrorist Organization (FETO) — and its aftermath have turned things upside down. Alarmed by the course the country appears to be taking, many Turks are now scrambling to buy property abroad, relocate to the West or buy foreign citizenship. Consultancy firms report a five-fold increase in such inquires since the coup attempt.

Only a month ago, Turkey’s construction and real estate sector had brimmed with optimism over the prospect of a sales boom to foreigners, driven by the citizenship incentive, with some estimating potential revenue of $200 billion. Today, however, both those expectations and the controversy over naturalizing Syrians have been put on the backburner. Talk now is not of foreign cash flowing into Turkey, but Turkish money fleeing abroad amid fears about the country’s future.

Even before July 15, Turkey’s political and security woes had fueled a pronounced trend of Turkish citizens seeking better futures abroad. The United States topped the list of destinations for Turks looking to emigrate, buy property or start businesses with a view toward acquiring residency permits and citizenship. The trend was driven by fears that Turkey was headed for one-man, authoritarian rule as Erdogan advanced oppressive and polarizing policies, persecuted and jailed journalists and intellectuals and soured relations with the West, including the European Union. A string of bloody terrorist attacks by the Islamic State and Kurdish separatists further compounded fears.

In May, US-based consultants, speaking to Voice of America’s Turkish service, reported a “boom” in the number of Turks exploring options for obtaining green cards, residency permits and other opportunities in the United States through the purchase of property and commercial investment. More than 100,000 Turks were reported to be living in Miami alone, with the numbers steadily on the rise across the rest of the United States.

The coup attempt and the ensuing state of emergency seem to have greatly amplified this trend, as Turkey’s leading financial daily, Dunya, reported this week. Representatives of international real estate agencies told the paper that inquiries by Turkish nationals seeking to buy properties abroad in anticipation of relocating had increased up to five times since July 15. Some companies have had to reinforce staff to cope with the soaring demand for appointments.

“The number of people asking questions online increased to between 500 and 600 per day,” one agency manager said. “About 4-5% make appointments and come to the office for further consultations.”

The United States, Canada, Spain and Britain top the list of countries where Turks are seeking to buy properties and relocate. The EU countries of Ireland, Portugal, Latvia, Greece and Malta offer citizenship or residence permits to foreigners who purchase properties worth between 250,000 and 500,000 euros or buy bonds of at least 150,000 euros and keep them for five years.

German immigration authorities, meanwhile, say asylum requests by Turkish citizens are also on the rise. The number of applications totaled 1,719 for the first half of the year, close to the numbers for all of 2015 and 2014, which stood at 1,767 and 1,804, respectively, according to Deutsche Welle.

Turkey-EU tensions are on the rise in the wake of the coup attempt, threatening to derail the deal to stop the flow of Syrian refugees to Europe, which is linked to a plan to grant Turks visa-free travel to the EU. European fears of a migration wave from Turkey might further hinder the visa waiver provision.

In sum, Ankara, which until recently was busy planning the naturalization and accommodation of Syrian refugees, now faces the prospect of losing its own citizens and its local resources flowing into properties abroad. Since July 15, the government has taken a number of steps to try to allay fears and thaw the polarization that has gripped the country for so long. Yet, Erdogan and Prime Minister Binali Yildirim have cast out the Kurdish Peoples’ Democratic Party, which inspires little faith that their fence-mending effort is intended as lasting policy.