Will Iraq's Shiite militias flow to Syria after post-IS?

Expelling IS from Iraq will lead Iraqi Shiite militants to volunteer to fight in Syria, as the Syrian conflict continues to attract Sunni and Shiite fighters from around the world. 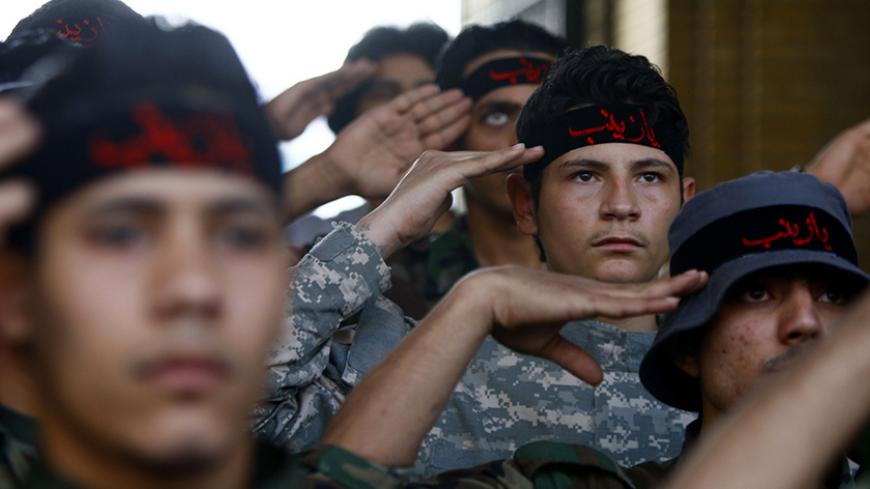 Iraqi Shiite fighters salute to the shrine of Sayyida Zeinab, the granddaughter of the Prophet Muhammad, in the Sayyida Zeinab area of Damascus, May 25, 2013. - REUTERS/ Alaa Al-Marjani

BAGHDAD, Iraq — As they seek to open new fronts in the region, Shiite militias continue to recruit Iraqi Shiite young people to fight in Syria. In this context, Sheikh Akram al-Kaabi, the leader of Hezbollah al-Nujaba, announced Aug. 1 his fighters' willingness to fight alongside the Houthis in Yemen. Also, right after the announcement of the establishment of "Jaish al-Mou'mal in Iraq and the Levant" on June 15, the militia expressed its intention to fight in Iraq, Syria, Bahrain and Yemen in a bid to defend Shiite holy sites. The new organization announced its desire to open battlefronts wherever Shiites exist in the region.

Since fighting broke out in Syria on March 18, 2011, young Iraqi Shiite fighters of several other militias, including the Brigade of Abu al Fadl al Abbas, the Zulfikar brigade and the Iraq Hezbollah brigades, have been flocking to Syria to fight alongside the Syrian army and its ally, Lebanon's Shiite Hezbollah, against the mostly Sunni Syrian opposition factions.

The fact that the Islamic State (IS) seized control of Mosul on June 11, 2014, and Ramadi on May 15, 2015, has apparently failed to deter those Shiite young people from joining the fighting fronts in Syria, according to a report published by the Washington Institute for Near East Policy.

Ali al-Yasiri, a 21-year-old Shiite fighter from Babylon, south of Baghdad, told Al-Monitor that defending the Shiite shrine of Sayyida Zeinab in Syria, after Sunni extremist organizations threatened to destroy it, "is as important as defending any Iraqi city."

Religious faith motivates Shiite young people to fight tooth and nail in Syria, in line with the comments of the commander of the Quds Force of the Iranian Revolutionary Guard Corps' Maj. Gen. Qasem Soleimani, who said Jan. 22 that "thousands of fighters are defending the honor of Islam in Syria."

Yasiri, who has been fighting in the vicinity of Sayyida Zeinab's shrine since 2013 after he split from the Shiite Mahdi Army that year, added during his short one-month-visit to his family in Iraq that "Iraqi fighters are still going to Syria to defend Shiite holy sites."

This religious motive that is driving Iraqi Shiites to fight in Syria was confirmed by Ali al-Husseini, a commander in the Popular Mobilization Units (PMU) in Babylon, who told Al-Monitor, "international borders do not prevent young Shiites from defending their holy places wherever these might be outside Iraq." Husseini's view converges with that of PMU deputy chief Abu Mahdi al-Mouhandes, who confirmed to the media on June 26 that "the PMU will hunt down IS at every point outside of Iraq."

Meanwhile, Nazir al-Asadi, a researcher in Shiite affairs, justified the rush to fight in Syria, telling Al-Monitor, "Those who volunteer to fight in Syria feel endangered by the armed groups' threat to Shiite shrines there."

This Shiite need to widen the conflict to places with Shiite holy sites led some to accuse Shiites of fighting a proxy war for Iran in Syria. This could be due to the fact that "a lot of Iraqi volunteers feel that Iran is defending Shiite sanctities with them while providing them with financial support," Mohammed Nasserite, one of the combat groups' commanders in Syria, told Al-Monitor.

Nasserite fought in Syria throughout 2014 and then returned to Iraq. "Iran is providing Shiite fighters in Syria with financial support," he revealed, and added that "the salary of a fighter amounts to a minimum of $700 [per month]."

For its part, IS does not recognize borders in the fight and says that it is supporting Sunnis everywhere. This entrenches the religious war at a time when volunteers are going beyond their country's borders to fight in other regions. While a Saudi belonging to a Sunni militant group would fight in both Iraq and Syria, an Iraqi fighter would not mind moving to Syria and even Yemen to defend Shiites there.

Based on this religious motivation, Sunni fighters from different countries are volunteering to support the Syrian Sunni opposition or join armed groups such as IS and Jabhat al-Nusra at a time when Shiite young people from different countries, including Iraq, are fighting alongside the Alawite Shiite regime of Syrian President Bashar al-Assad and the Lebanese Hezbollah.

While the author Hamza Al Janahi, who volunteered to fight in the ranks of the PMU in Iraq in 2014, told Al-Monitor that "Sunni groups' threat to exterminate Shiites and destroy their sacred tombs has led young Shiites to volunteer to fight in Syria," writer and political analyst Mohammad Wani, a Sunni, told Al-Monitor, "What is going on is a sectarian strife as the armed conflict emerged after the fall of Saddam's regime in Iraq in 2003 and intensified with the outbreak of the Syrian crisis."

Expelling IS from Iraq will lead Iraqi Shiite militants to volunteer to fight in Syria, as the Syrian conflict continues to attract Sunni and Shiite fighters from around the world.