Israel has decided to release the bodies of deceased Palestinian assailants to their families to avoid an escalation of already heightened tensions. 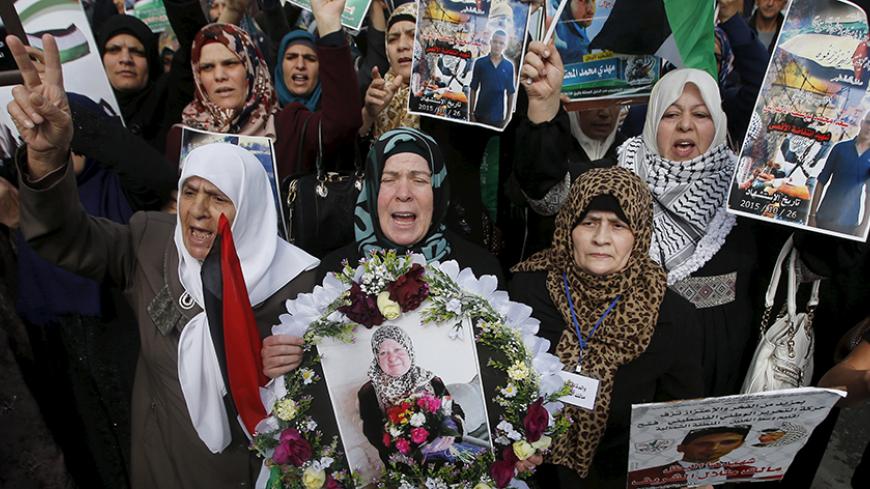 Palestinians take part in a protest to demand Israel return the bodies of Palestinians who allegedly stabbed Israelis in the West Bank city of Hebron, Nov. 10, 2015. - REUTERS/Mussa Qawasma

Israel will soon begin to hand to the Palestinian Authority (PA) an additional seven bodies of East Jerusalem Palestinians killed while carrying out terror attacks in Israel. The PA agency tasked with prisoner affairs announced in Ramallah on Aug. 15 that according to an agreement reached with the families, who petitioned the Supreme Court, Israel would release the bodies for burial. The first will be the body of Muhammad Jamal al-Kalouti, from the Kafr Aqab neighborhood, who along with another Palestinian shot at a Jerusalem light-rail car on March 9, seriously wounding one Israeli. If his funeral is small — less than 25 people — and goes off without a hitch, the rest of the bodies will be handed over to their respective families for burial.

The issue of what to do with the bodies has been a sore spot since the wave of anti-Israel terror broke out in October 2015, with the Israel Police having a policy on the matter different from that of the Israel Defense Forces (IDF). The bodies of assailants who had been West Bank residents and were being held by the IDF were usually handed over almost immediately, sometimes contrary to the wishes of the political echelon. The IDF has argued that holding on to the bodies and preventing their burial stirs Palestinian unrest and encourages additional terror attacks to avenge what is widely perceived on Palestinian websites and social media as Israel's humiliation of the shahids (martyrs). The Israel Police, on the other hand, have held on to the bodies of East Jerusalem assailants as a punitive measure.

After Avigdor Liberman took office as minister of defense at the end of May, the IDF's policy was changed. Following shootings on June 8 in Tel Aviv in which four Israelis were killed, Liberman ordered the military to hold on to the two assailants’ bodies.

At the end of March, families of some of the deceased Palestinians had petitioned Israel’s top court, through attorney Mohammed Mahmoud, demanding that the state release the bodies of their sons so they could be buried. On July 25, the court ordered the Israel Police and the state prosecutor’s office to explain why the bodies were not being handed over for burial. Surprisingly, before the court ruled, Israel informed the Palestinian prisoners agency that the bodies would be released to the PA.

“Contacts with the Israel Police went on for many weeks,” Ihad Hamada, from the PA’s prisoner agency, told Al-Monitor. Hamada said the compromise was reached through the good offices of Arab Israeli Knesset member Osama Saadi of the predominantly Arab Joint List. Saadi came to an understanding with the assailants’ families according to which they would adhere to the conditions laid out by Israel’s Ministry of Internal Security to abstain from mass funerals and to deposit a sum of money to ensure that they abide by the terms. According to Hamada, the families had agreed to the conditions many weeks ago.

A lawyer for one of the families who is employed by the PA’s prisoner agency and requested anonymity told Al-Monitor, “We know that Israel fully understands that if they want continued calm and a suspension of terror attacks, quiet must be restored to the streets. Holding the bodies in Israel is an issue that generates great tension on the street.”

He stated, “You in Israel don’t understand the extent to which this stirs incitement, especially among young Palestinians who see the continued retention of the bodies as humiliation and abuse of the families. Not only does this not enable calm to be restored, it generates unrest and, among many, also a desire to do something about it.”

Israel’s refusal to hand over the bodies has not been the only cause of tensions with the Palestinians and increasing fear of a resumption of terror attacks. In recent days, the Al-Aqsa Mosque issue, which set off the wave of terrorism last October, has once again bubbled to the surface. Just as then, Palestinian news sites and social media are full of reports about alleged secret plans by Israel and activists on the radical right to take control of the Temple Mount compound and change the status quo at the site, holy to Jews and Muslims, who call it the Haram al-Sharif.

A visit to the compound by right-wing Jewish activists on the 9th of the Hebrew month of Av (Aug. 14) — a Jewish day of fasting to mourn the destruction of the First and Second Temples — and claims by the Muslim custodians (Waqf) of the site that the activists had prayed there, in violation of customary understandings at the flashpoint compound, received extensive coverage by Palestinian media. Jordan’s King Abdullah II issued a sharp condemnation on Aug. 15, warning Israel that such Jewish visits to the compound could spark a religious war.

Senior PA and Waqf officials have conveyed constant messages to the Jordanian monarch, warning that the next outbreak of violence and clashes at Al-Aqsa is only a matter of time. After the Aug. 14 incident, they had again implored Abdullah to warn Israel of such a scenario, and he did.

The renewed tension over Al-Aqsa has not escaped the attention of the Israeli intelligence community, which closely monitors developments on the ground. Israeli and Palestinian security agencies, which have been cooperating closely over the past year, are increasingly convinced that the relative calm on the West Bank and East Jerusalem in recent weeks could be misleading.

According to their assessment, unless measures are taken to ensure calm, another wave of terror attacks could erupt at any moment. The despair over the economic situation in the Palestinian territories and conditions in general has not abated, and the rage of young Palestinians has not subsided. The recently increased pace of Palestinian house demolitions in Israeli-controlled Area C of the West Bank does nothing to ease tensions either. The motivation to carry out terror attacks remains, and any event, whether at the already tense Al-Aqsa compound or elsewhere on the West Bank, could reignite the fuse.

The decision by Internal Security Minister Gilad Erdan to resume releasing the Palestinians’ bodies was made upon the recommendation of Shin Bet and the IDF, which have consistently supported a restrained Israeli policy. This is just one step among an array of measures that Israel must take to prevent the next blowup. It is also an indication that Liberman has come to understand that punitive measures do not necessarily create deterrence and are not necessarily a solution.