100 global intellectuals to gather in Palestine

The Witness Center for Citizen’s Rights and Social Development launched an initiative to invite renowned thinkers from around the world to come to Palestine in support of the Palestinian cause. 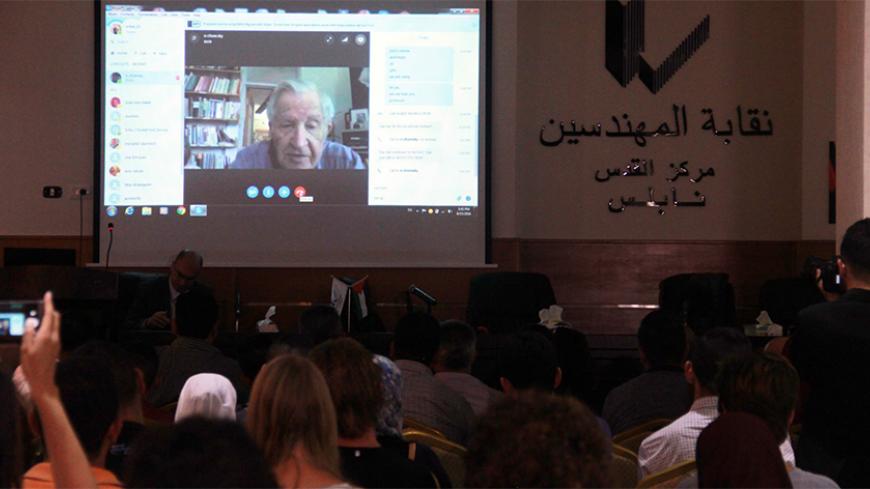 Noam Chomsky inaugurates the "100 International Intellectuals in Palestine" campaign via teleconference at an event in Nablus, West Bank, Aug. 15, 2016. - Twitter/Shahed_witness

RAMALLAH, West Bank — In a press conference Aug. 14 in the northern West Bank city of Nablus, the Witness Center for Citizen’s Rights and Social Development launched an unprecedented campaign in Palestine, called the "100 International Intellectuals in Palestine," with the aim of attracting the world’s most prominent thinkers to discuss the Palestinian cause and revive interest in it on the global level.

As a result of the May 17, 2010, ban imposed by the Israeli authorities barring him from visiting the West Bank, internationally renowned thinker Noam Chomsky inaugurated the campaign Aug. 15 via a video teleconference attended by intellectuals and concerned individuals in Nablus.

Chomsky addressed a message to Palestine, saying, “Israel is ignoring the two-state and one-state solutions, while endeavoring to establish a Greater Israel. The cause for the current solution’s failure was Washington's and Israel’s disregard for the national rights of the Palestinian people.”

He reviewed the historical progress of the Palestinian cause, which has been absent from international agendas since Israel’s declaration of independence in 1948, and said, “The possible solution lies in the establishment of an independent Palestinian state, which requires American and international will on par with that exhibited vis-a-vis the Iranian dossier. The opportunity today is ripe, and the American public is now more accepting and supporting of the Palestinian cause, just like their European counterparts,” who have been more supportive of the establishment of a Palestinian state.

Witness Center secretary and coordinator of the campaign Mohammad Areiqat told Al-Monitor in this regard that the goal of the "100 International Intellectuals in Palestine" campaign is “to revive the Palestinian cause in the international arena and in the psyche of the word populace, following the rapid developments taking place in the Middle East, specifically in Syria, Egypt and Yemen. These events have superseded the Palestinian cause on the global agenda and list of priorities.”

He said, “We have found that the best way to revive the Palestinian cause is to talk to international intellectuals who play an important part in the drafting of their respective countries’ policies and who possess the ability to influence their respective governments and people, as well as to mold public opinion. They can also help us reach nontraditional solutions that are not biased in favor of Israel, while forming a popular lobby that spans the world.”

In regard to the reasons for resorting to such a measure, Areiqat said, “For the past 20 years, the Palestinian Authority embarked on a diplomatic effort through negotiations with Israel under international auspices. But this diplomacy failed as a result of the international bias toward Israel, while popular diplomacy was neglected, leading to a global reduction of public interest in Palestine. The best way to revive the [Palestinian] cause in the global psyche is through popular diplomacy, through influential intellectual thinkers, who might be able to help support such diplomacy.”

Areiqat added that the campaign will host at Birzeit University on Sept. 15 Foreign Policy Journal columnist Jeremy R. Hammond, who will discuss the US elections and the influence of lobbying groups on the results thereof, particularly the Jewish lobby in the United States and its impact on the US decision-making process. Hammond will also speak about the methods employed by the Jewish lobby to secure from the American presidential candidates promises that they would serve Israeli interests.

Another figure — who has not been identified yet — has also been contacted by the Witness Center to make an appearance in October in Nablus. In addition, intellectual Michel Chossudovsky, director of the Center for Research on Globalization, will be hosted in November, when he will deliver a lecture at Bethlehem University about globalization and its effect on the Palestinian cause. Moreover, due to his inability to visit Palestine as a result of a scheduling conflict, journalist Thomas Friedman confirmed his participation and willingness to participate in a video teleconference to a Palestinian audience in Nablus at the beginning of next year, about the US media and its influence on US policies related to the Palestine cause. The future lectures will be held in different cities and universities in the West Bank.

Concerning campaign backers, Areiqat said, “Planning and preparations for the campaign were initiated by the center alone, but we managed to secure 20,000 euros [roughly $22,000] from the Norwegian government, earmarked for the travel and lodging expenses of the visiting intellectuals. We also received some backing from private Palestinian firms, such as tourism and commercial enterprises that committed to provide airline tickets to — and accommodations in — Palestine.”

Despite the fact that the campaign remains in its infancy, future opportunities abound on a multitude of levels. This might contribute in increasing its positive effects, most prominent among them, according to Areiqat, the willingness of the intellectuals who participate in the campaign to draft an article or analysis of the conferences held in the framework of the campaign, which would be distributed to the research and studies centers of their home countries, as well as organizing symposia dealing with their participation in the campaign and their support of the Palestinian cause.

In this context, Areiqat said, “French philosopher and professor at the Paris Institute of Political Studies, Bertrand Badie, agreed to come to Palestine next year and suggested that we [as the center sponsoring this campaign] come to Paris and hold a joint lecture at the most prominent political science institute with other intellectuals about the Palestinian cause — an excellent idea that we are currently studying.”

Areiqat added that once 20 lectures for 20 different intellectuals are organized, the campaign would consider holding a joint symposium in one of Europe’s capitals. The intellectuals would be invited to publish a joint working paper on their experiences in the campaign and the possibility of developing their ideas to support the Palestinian cause. But to succeed, the idea is dependent upon finding a suitable funder.

The initiative will not overlook Arab and Middle Eastern intellectuals and philosophers, and Areiqat disclosed that contact is ongoing with prominent personalities to participate, such as Lebanese thinker Amin Maalouf and former Turkish Prime Minister Ahmet Davutoglu, in his capacity as one of the main drafters of Turkish foreign policy.

Despite the campaign’s launch in Palestine, assessing its success and ability to engender positive results will require some time. But this is not stopping the Palestinians from devising new ideas meant to spotlight their cause in the international arena, as well as their conviction that global public opinion can play an important role in support of their rights.