Palestinians enthusiastically respond to a letter-writing campaign designed to draw US President Donald Trump's attention to their cause. 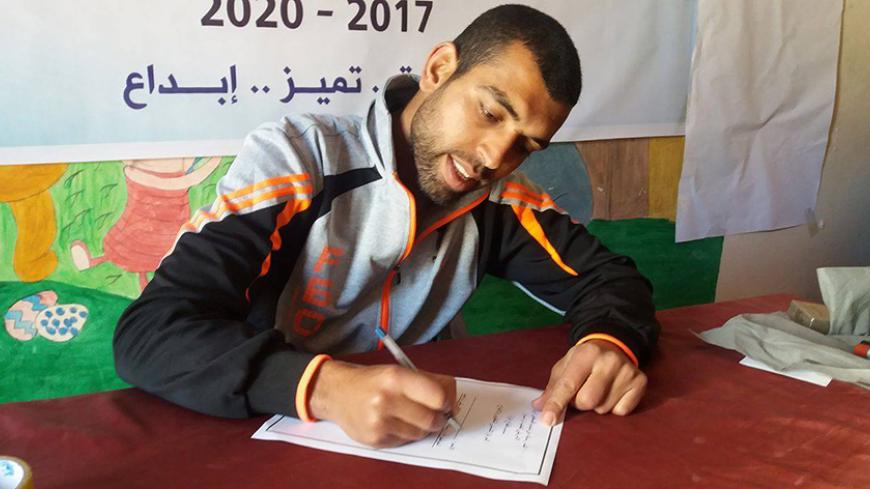 A Palestinian man takes part in the Youth Center for Development and Innovation's letter-writing project in this undated photo. - Facebook/YcFdAi.Palestine

RAMALLAH, West Bank — Some 100,000 Palestinians have written letters to US President Donald Trump asking him to actively support the Palestinian movement for sovereignty.

The Youth Center for Development and Innovation in Nablus collected the letters — written by Palestinians in the West Bank, the Gaza Strip and the diaspora — in just 11 days through Jan. 20, the day Trump was inaugurated. The center has summarized the letters in an 11-page missive to be submitted to Trump through official channels.

Abbas had congratulated Trump on his inauguration and expressed his willingness to work with him for peace, security and stability in the region. He also sent Trump a letter Jan. 9 to explain the risk posed by Trump's talk of relocating the US Embassy in Tel Aviv to Jerusalem. Such a move would have "devastating effects on the peace process, the option of a two-state solution and the security and stability of the region," the letter said, according to Wafa, the Palestinian News and Information Agency.

As part of the center’s campaign, the organization put a link on its social networking pages to facilitate the letter writing. More than a hundred youth volunteers across the West Bank, the Gaza Strip, Palestinian refugee camps in Lebanon and Syria, and the Palestinian communities across the world encouraged citizens to write letters.

"The letters call on Trump to stand by the principles of democracy and human rights, all the while committing to and defending international legitimacy by finding a just and lasting solution to the Palestinian cause," he added.

Abu Ras believes the summary letter that will be sent to Trump will create positive change in the president's policy toward the Palestinian cause, as it truly reflects the Palestinians' position and the role they believe the US administration should assume. He added that the letter emphasizes the need for the president to be fully aware of the peace process with Israel and the risks surrounding it, especially regarding Israeli settlements and the embassy's location.

The 100,000-letter campaign is not funded by any party. The nonprofit and independent youth center, which was founded at the end of 2013 by a group of young people, prepares political studies, holds seminars and conferences, and conducts opinion polls on issues of interest to researchers and decision-makers.

Campaign coordinator Latifa Damra told Al-Monitor the idea arose because of Trump's statements before his inauguration. The summary letter urges him not to take positions against Palestinians without having full knowledge of their political positions and will to implement the international resolutions.

The response to the campaign, Damra said, confirms young Palestinians' interest in taking political action to serve their national cause, as well as their faith in the impact and change they might bring about.

Ahmad Jamil Azem, director of the master of arts program in international studies at Birzeit University, told Al-Monitor the letters are "an attempt to anticipate the moment when Trump will be drafting policies and resolutions regarding the Palestinian cause."

Azem added, "Those letters explain to President Trump the current political scene and the positive Palestinian position on the peace process. They also explain to him the repercussions of any Israel-biased decisions that may be taken in the future both on the peace process and the two-state solution, and on the entire region."

Though Azem believes the letters can have an impact on the US administration, he said more needs to be done to achieve the desired outcomes.

The center is now submitting the summary letter to the Nablus governorate. From there, the letter will be officially submitted to the Palestinian Ministry of Foreign Affairs, which will deliver it to the US Consulate in Jerusalem and the Palestine Liberation Organization's general delegation in Washington so it can then be delivered to the president.

by Murielle KASPRZAK and Joseph SCHMID | AFP | May 26, 2022
END_OF_DOCUMENT_TOKEN_TO_BE_REPLACED