Could this Palestinian businessman take center stage in politics? 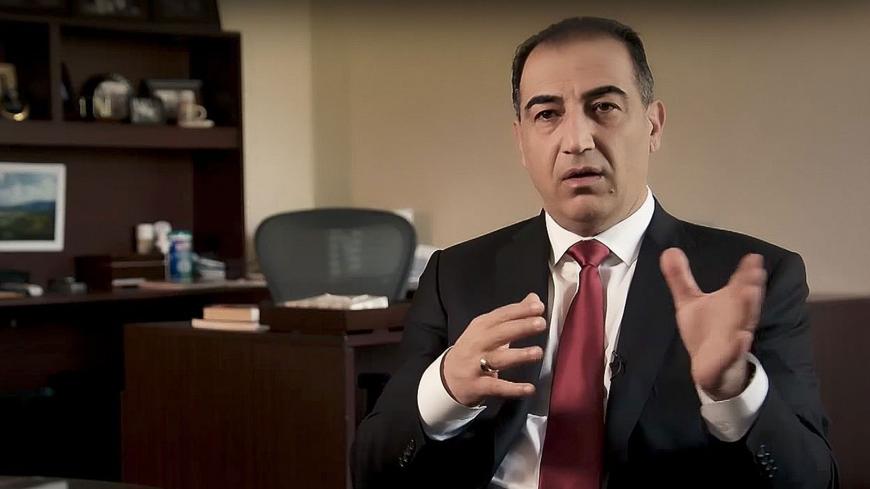 An internal political deadlock between Fatah and Hamas and the crisis with Israel have taken center stage in the Palestinian arena. Meanwhile, there has been increasing talk about the successor to Palestinian President Mahmoud Abbas as a consequence of reports on his deteriorating health.

Amid this situation, Palestinian medical chemist and businessman Adnan Mjalli visited the Gaza Strip in January and July, met with Hamas leaders, held a series of public and official meetings and events and then launched his political initiative to end the Palestinian rift. Mjalli obtained his Ph.D. from the University of Exeter in the UK, registered over 700 patents and developed medicines aimed at treating chronic diseases such as diabetes and Alzheimer's.

Mjalli has built his long business career both in the United States and the Palestinian territories. He founded TransTech Pharma, a US medical research firm, and he is the CEO of Mjalli Investment Group USA, which includes several companies that operate in Palestine and the United States. He also founded the Adnan Mjalli Educational Society in the West Bank to support and help outstanding Palestinian university students complete their education.

During a visit to Gaza on June 30, Al-Monitor met with Mjalli, who showed concern about the so-called "deal of the century" — the US administration's forthcoming Mideast peace plan — claiming it aims at separating the Gaza Strip from the West Bank and entrenching self-rule in the West Bank.

He said, “When I met with Hamas leaders in Gaza in January and June, I realized that Hamas is pursuing peaceful resistance and has approved of establishing a Palestinian state according to the 1967 borders. Hamas does not want war and is committed to an open truce with Israel. It has taken a decision not to engage in military confrontation with Israel. I believe Hamas needs arms just for defense purposes.”

Mjalli added, “I proposed to Fatah and Hamas leaders that they unite their military ranks under a national army. I do not have US support to participate in any presidential race to succeed Abbas. I am not after this position.”

Mjalli launched a political initiative for national salvation in late June. It suggests that the Palestinian Authority (PA) manage the Gaza Strip once again, lifting the siege, rebuilding the Palestinian political regime based on national partnership, integrating Hamas within the PLO, reviving the Palestinian Legislative Council and holding general elections on an agreed-upon date.

Palestinian factions went silent regarding Mjalli’s initiative, perhaps to study it in an even-headed way. But Palestinian media outlets did speak out about it. Journalists opposing it said it paved the way for disarming the Palestinian resistance and to beguile Palestinians by improving their economic situation at the expense of the national cause. People advocating the initiative said it gives a new vision worthy of respect and that it stems from Mjalli’s support of the Palestinian cause that has gone awry, leading to Palestinians’ frustration.

Ahmed Yousef, a former political adviser to Ismail Haniyeh, Hamas’ political bureau head, told Al-Monitor, “Mjalli has qualifications that can push him to the forefront of Palestinian political work, including handling high-ranking and leadership positions. He has extensive international relations, and his success in business as well as scientific creations might give him the chance to spearhead political work. Hamas has welcomed all his ideas after extensive discussions. The movement does not veto him, and there are understandings they reached regarding the reconciliation and ending the rift.”

Hamas did not make a public announcement about Mjalli’s initiative and political stances. Yet during Mjalli’s meeting with Haniyeh at his office in Gaza on June 30, they discussed the latest political developments of the Palestinian cause, ways to deal with it, local, regional and international activities in the Gaza Strip, provide relief to Palestinians and ending the blockade, according to a Hamas statement published July 1 on its official website.

Mjalli has strong ties with the ruling political class in the United States, and with Hillary Clinton, the Democratic candidate in the 2016 presidential election. He arranged the first call between US President Donald Trump and Abbas in March 2017. These relations might give Mjalli privileges to increase his political influence as opposed to his competitors for Palestinian leadership positions. The United States holds the diplomatic influence and funding keys in Palestine.

However, Mjalli’s ties to the United States might be publicly embarrassing for him, because the Palestinian public does not welcome rapprochement with the US administration, especially the current one, which is widely viewed among Palestinians as siding with Israel.

Abdul Sattar Qassem, a political science professor at An-Najah University in Nablus, told Al-Monitor, “Mjalli’s success in academia and business does not necessarily mean he will be successful in political work. Each field has its requirements. The real solution is for Palestinians to head to the ballots. Mjalli’s talk about disarming the resistance and merging it with the national army lacks political realism, since Palestinians are still under Israeli occupation.”

The PA does not seem enthusiastic about Mjalli’s emergence. Perhaps this is because he is not a member of Fatah or because he is outside the ruling organization. The PA is concerned that Mjalli might be backed by the international community after Abbas is no longer in the picture. The PA did not make an official announcement about Mjalli’s appearance in the political arena.

Palestinian media reported June 17 that Palestinian security in Ramallah forced the Arab Bank to freeze Mjalli’s accounts without justification. Mjalli confirmed that the Arab Bank froze his account after he funded a charity project in the Gaza Strip. The bank made this move out of fear of being accused by the United States of supporting terrorism.

A member of Fatah’s Central Committee told Al-Monitor on condition of anonymity that “handling leadership positions in the Palestinian territories requires long-standing experience in political and militancy work against Israel. Apart from the attempts to parachute someone on the Palestinian people, technocratic university and business work is different from political leadership. Many factional members are qualified to lead the Palestinians through elections.”

On July 4, Sama news agency began conducting a poll on whom Palestinians would like to be prime minister. Mjalli was among candidates that included current Prime Minister Rami Hamdallah and former Prime Minister Salam Fayyad. Voting will end in August.

Mjalli’s does not seem to have an easy path when it comes to assuming a leadership position in the Palestinian territories amid the presence of prominent historical and political factional leaders. He might have a better chance of being named to professional and technocratic positions rather than political ones, because influential factions might then support him for his economic and financial experience.