The Jordanian government is cracking down on Uber drivers because the company is in violation of public transit laws. 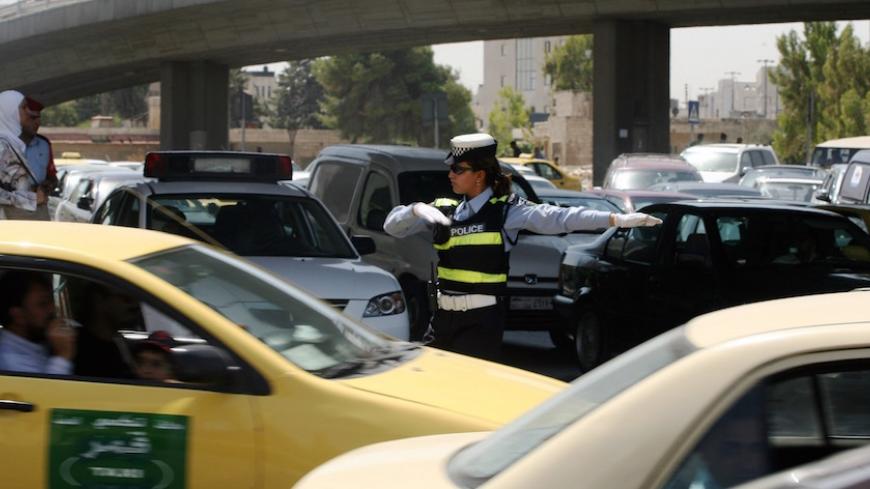 A Jordanian traffic police officer directs traffic at one of the city's most important road crossings, in Amman, Sept. 10, 2007. - GETTY/Salah Malkawi

AMMAN, Jordan — The Jordanian government has cracked down on the popular US ride-hailing company Uber and its Dubai-based rival, Careem, impounding around 60 of their cars, an Amman police official told Al-Monitor. The police have covertly ordered Uber rides on the company’s app and then after the drivers' arrival seized the cars and issued fines. Justifying the government’s recent change in policy toward the US company, Marwan Hmoud, director general of the Land Transport Regulatory Commission (LTRC), said, “[Uber] cars currently operating in Amman and other governorates are violating traffic rules and regulations.”

Many Amman residents resent the government’s interference in this aspect of daily life because the ride-hailing companies are well-liked in the city. Despite frequently adopting a pro-government line, Nabil Sharif, the former minister of state for media affairs and Jordanian ambassador to Morocco, opposes the police campaign to impound Uber and Careem vehicles. “This is the new technology all over the world,” he told Al-Monitor. “You cannot stop this wave of change.”

Hazem Zureiqat, an urban planning specialist and Uber user, explained, “The reasons why these services are successful here is because the government has failed to provide a decent public transport system.” Echoing the complaints of many Amman residents, Zureiqat added that people are frustrated with taxi drivers who insist on smoking in the vehicle or who violate local law by refusing to abide by the meter.

Sharif noted that the taxi industry feels “threatened by Uber and its advanced services.” He said that the powerful taxi sector likely lobbied the Transportation Ministry and as a result, he said, “Probably, the government caved into that pressure.”

A fair number of Jordanians work as taxi drivers, and they believe the taxi industry is right in pressuring the government because Uber appears to be operating illegally. Hmoud told Al-Monitor that Uber and Careem are violating the 2010 Public Transport Law, which prohibits Jordanians as well as foreigners from operating a public transport vehicle without a government license. Hmoud also explained that Uber cars do not have proper insurance, which can be especially troublesome in an accident.

The Hashemite Kingdom of Jordan is far from the only country in the region where Uber has caused controversy. The United Arab Emirates has also cracked down on Uber, and Egyptian taxi drivers have protested the company’s perceived “unfair advantage.” Ibrahim Manna, the general manager of Emerging Markets at Careem, told Al-Monitor, “Some governments don’t know what to do with these types of technologies, so they prefer to block them rather than try to regulate [them].” He added, “That is the current situation in Jordan.”

Jordanian government officials stress that the current policy is not merely symbolic, but a serious enforcement effort. In a July 17 interview with the Jordan Times, Bassem Kharabsheh, the director of Amman's Traffic Department, said, “It takes time to track down all the drivers since all the work is done through the [Uber] application.”

An informal transportation system — involving private individuals openly transporting people for payment off the books — currently operates across Jordan with little regulation, Zureiqat said. The urban planning specialist considers the current approach to the ride-hailing outfits a flawed policy, noting that the government is “being selective about cracking down on services like Uber and Careem, which are actually providing a high-quality service using technology.” Many citizens are suspicious of the police’s apparent double standard on transportation enforcement.

The Jordanian government and its representatives have not always been opposed to Uber. Dana Daoud, the director of the Information Bureau at the Jordanian Embassy in Washington, excitedly tweeted on April 3, 2015, “.@Uber launches its service in Amman, Jordan — Uber’s 300th city!”

After the Eid festival on July 6, however, the kingdom’s policy toward Uber changed dramatically. Hmoud explained that when Uber began allowing customers to pay with cash in addition to credit cards — thus operating exactly like a taxi service, but without a license — the government decided that it could no longer be lenient toward the company, allowing it to operate differently from taxis, which are subject to strict regulations. Taxis must register with the government and obtain permission from the LTRC for the use of their vehicles to provide public transit.

Many Jordanians reject the government’s assertion that the crackdown on Uber stems from “security” concerns, as Hmoud claimed. Basem Aggad, a frequent Uber user, said that unlike with taxis, Uber and Careem provide an extra layer of personal security. Users are provided with information about the driver and can verify the license plate before entering the vehicle. Aggad called the government’s seizure of Uber cars “absurd.”

Amid the current pressure on the company, Uber’s Middle East spokeswoman Shaden Abdellatif told Al-Monitor, “We are currently working with the government to help develop the regulatory framework to allow for the use of technology in the transport space.”

The police generally seize Uber vehicles for a week after issuing a citation for operating public transit without a license. Thus Jordanians can still use the app, but wait times have increased. Hmoud disclosed that his office does not know the number of Uber cars operating in Amman, and Abdellatif declined to provide such information.

One driver told Al-Monitor that the company reimburses drivers for the fine. Many of them return to the road despite the legal risks.

Al-Monitor spoke with an Uber driver who insisted on using the pseudonym Ahmad, due to fear of arrest. After arriving at Taj Mall in Amman to pick up a passenger three weeks ago, he said, the police seized his car for a week. Officials warned Ahmad that if they caught him working again for Uber, he would be required to pay a fine of 3,000 dinars ($4,230), approximately five times the average Jordanian monthly salary, in addition to possibly serving a jail sentence. Regardless, given the high rate of unemployment among young Jordanians, Ahmad returned to driving for Uber. “It’s risky, but Uber is the only job for me now,” he said.