Israeli Prime Minister Benjamin Netanyahu appears to have discarded seeking negotiations for a two-state solution with the Palestinians for a backdoor approach of forging alliances with Arab and other states. 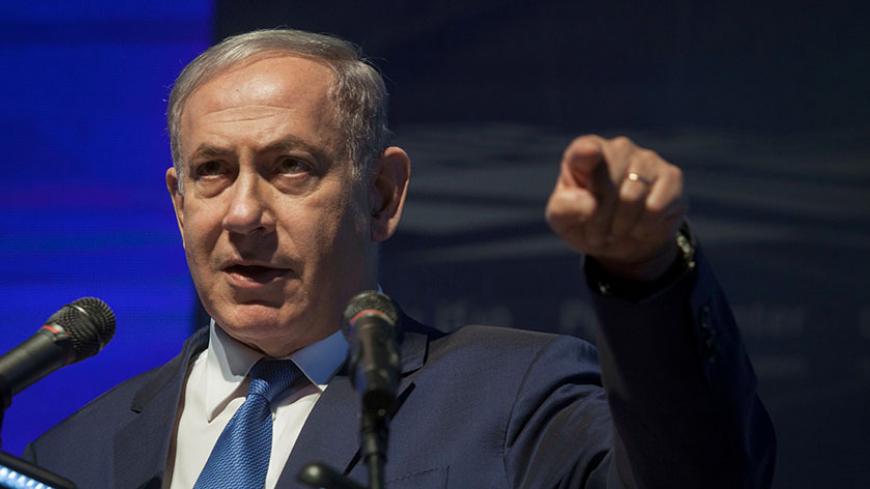 Israeli Prime Minister Benjamin Netanyahu gestures as he speaks during a ceremony at the Peres Center for Peace in Jaffa, Israel, July 21, 2016. - REUTERS/Dan Balilty

Israeli Prime Minister Benjamin Netanyahu spent a total of six hours this week talking to senior Israeli journalists. He was trying to present them with an unmediated account of his achievements and worldview. On Aug. 8, he met with the leading journalists from Israeli public radio and TV Channel 1, components of the Israel Broadcasting Authority, and on Aug. 10, he met with senior journalists from Army Radio. Both meetings took place in his Jerusalem office and lasted three hours each, much longer than usual. Netanyahu’s staff claims that he plans to continue holding such meetings, which appear to be part of some kind of media blitz.

Netanyahu has given very few interviews to traditional media over the past few years. Social media has become his platform of choice for conveying messages to the public in an effective way. As a result, his return to traditional media has evoked quite a bit of interest and conjecture as to his motives. Above all, it is rumored that he wants to initiate an unmediated connection with journalists at this particular time because the investigation into his personal dealings is progressing.

Quotes leaked from the two meetings focused on his attitude toward the media (“I regret the creation of the Public Broadcasting Corporation”) and what he calls attacks on his wife Sara (“a pious woman, who helps the disabled”). Netanyahu made a point of standing throughout most of the long meetings and made extensive use of a slide show and whiteboard, so the meetings felt more like a presentation.

Reports from the meetings unfairly overlooked a key part of his overview, which focused on how he sees Israel’s geostrategic situation, his approach to security issues and his current diplomatic vision. Journalists who attended told Al-Monitor that Netanyahu devoted at least an hour to these topics in each of the meetings. The result is a fascinating and important statement, as the messaage was the exact opposite of that in the Bar Ilan speech that Netanyahu delivered in 2009, in which he expressed a commitment to advancing resolution of the Palestinian-Israeli conflict based on a two-state solution.

Netanyahu version 2016, smack in the middle of his fourth term as prime minister, presented a diplomatic, military, economic and cultural worldview that marginalizes the Palestinian issue and effectively removes it from his agenda. His current diplomatic approach, as he presented it, does not include an attempt to reach a diplomatic agreement with the Palestinians. What, then, does his vision include?

As an introduction, according to a journalist who requested anonymity, Netanyahu began with the proposition, “In this part of the world, the weak do not survive.” From Netanyahu’s perspective, this is an ironclad rule, which should be obvious to anyone who looks from near or far. Based on this, his conclusion is that the State of Israel must constantly grow stronger.

Turning to his own accomplishments, Netanyahu informed his audience that he has successfully strengthened Israel in four areas in particular: The first is military strength, with specific mention of the Israel Defense Forces’ new fleet submarines and F-35 fighter jets. He also emphasized that Israel is third in the world in intelligence gathering, after the United States and the Western European bloc.

Regarding the second area, Netanyahu noted how Israel’s economy is growing stronger. He made special mention of Israel being one of the three leading countries in the development and export of cyber products. He claimed that Israel’s economic and technological strength had enabled it to grow stronger diplomatically, which was his third category. Here Netanyahu spoke about the radical Islamic terrorism that characterizes the era and the way it affects so many countries. The worldwide need to contend with this new breed of terrorism requires what Netanyahu described as cooperation between states that results in the forging of new alliances. Because of its technological superiority, Israel is a preferred partner, much in demand, in this type of cooperation.

Netanyahu also spoke about this in a speech he delivered July 13 at a graduation ceremony at the National Security College. In the speech, he explained that in the current age of terror, it is impossible to live without alliances. “Large nations and superpowers need allies, so a tiny state like ours needs them all the more so. Even if we are big in many ways, we are still a small country, and we need alliances. Alliances are made with the strong, militarily and economically,” he said at the time. He even mentioned the nonpareil alliance with the United States, noting that it is irreplaceable.

In an effort to explain the depth of the relationship with the United States to the assembled journalists, Netanyahu cited a February Gallup poll that measured the level of support for Israel among the American public. He claimed that according to that poll, support for Israel is gradually increasing, while American support for the Palestinians remains low. Netanyahu also boasted of Israel’s strong ties with China, India, Africa and Russia, saying that they are the result of the country’s military and economic strength. He went on to note the importance of relations with the Arab states, the peace with Egypt and Jordan and the understanding among other countries in the region that with Islamic terrorism on the rise, Israel is their ally and not their enemy.

These remarks mesh with the speech that Netanyahu delivered at the National Security College last month. With reference to the Palestinians, he said, “We also used to say that as soon as peace breaks out with the Palestinians, we can achieve peace with the entire Arab world. There can be no doubt that this is always valid, but I am increasingly convinced that the process can work in the other direction too, and that normalization or progress in our relationship with the Arab world can help us to advance toward a wiser, more stable, better supported peace between us and the Palestinians.”

Regarding the fourth category, Netanyahu cited Israel’s cultural and spiritual strength, calling it the foundation upon which the other three categories rest, adding that this can be attributed for the most part to the sciences and the Bible. He explained that Israel’s scientific assets are the result of education and freedom to think and that even more should be invested in this area. As he put it, the Soviet Union had excellent education, but no unhindered initiative. “That is why it collapsed,” he concluded.

Delving into Netanyahu’s remarks provides a clear picture of a diplomatic worldview in which the Bar Ilan speech favoring a two-state solution is no longer valid. Netanyahu believes that the world has changed, and the Middle East has fallen apart. Faced with that picture, he thinks it is incumbent upon Israel to grow stronger and more secure and to replace diplomatic negotiations with the Palestinian with a series of alliances.