For dozens of years, Benjamin Netanyahu has been delivering the same speech to the UN General Assembly — once it was the PLO, today it’s Hamas — and the Israeli center still insists on asking whether Netanyahu has changed. 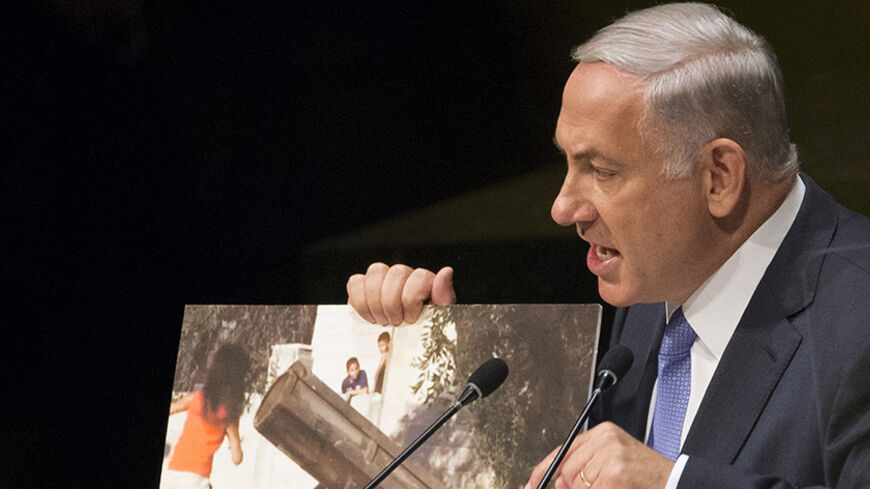 In a video clip from 1978 that was uploaded to YouTube in recent years, Benjamin Netanyahu was documented as presenting the Israeli standpoint in the conflict with the Palestinians in a debate that took place in Boston. At the time, Netanyahu was called Ben Nitay and, at 28 years old, he served as economic consultant in an American company. He was introduced by the debate presenter as a young Israeli graduate of MIT. In fluent, self-confident American English, the young Netanyahu ably presented the Israeli viewpoint as he saw it. He talked about Arabs who refused to recognize the Jewish state, about Palestinians who would prefer to throw the Israelis into the sea and the PLO’s plans to destroy the Zionist movement.

This was probably the first photographed documentation of Netanyahu to be broadcast on television, and it was already clear that we were witnessing a rising political and media star. Netanyahu loved the camera and the camera loved him. He used this skill, together with his political ability, to associate himself with the right person (senior Likud and former Minister Moshe Arens) to win an appointment seven years later (1984) as Israeli ambassador to the United Nations. To this very day, Netanyahu is viewed as the best ambassador Israel has ever sent to the UN.

When we view the young Netanyahu in the YouTube clip 36 years after that maiden debate, we immediately discern that the body language, tone of speech and exceptional rhetorical talents have not changed much; they have only improved and professionalized. Today, Netanyahu sports the white hair and a respectable, more serious adult demeanor that befits a man of 65. No longer an economic consultant, today’s Netanyahu is a veteran prime minister of one of the most endangered countries in the world. He stood the night of Sept. 29 before the UN General Assembly in New York, again using the same arguments to try to persuade his audience. Exactly like 36 years ago, and exactly like the hundreds and maybe even thousands of speeches he delivered afterward.

If in the past Netanyahu talked about a PLO that was not willing to recognize the Jewish state but only sought to eliminate it, today he enumerates Hamas, Palestinian President Mahmoud Abbas, Iran and the Islamic State (IS). While this is not enough to discount that Israel is, indeed, an endangered state, or to minimalize the ramifications of Abbas’ belligerent speech to the UN General Assembly (Sept. 26), it is enough to raise a few obvious questions: Is Israel’s prime minister still clinging to his basic suspicious stance vis-a-vis the Arabs, despite his statements in recent years about a two-state solution and the necessity for an agreement with the Palestinians? After Netanyahu’s two-state Bar Ilan speech (2009) and the settlement construction freeze in 2010, did he really move from the right to the center, as many analysts thought? Or were they really only false presentations to be issued by Netanyahu when he needed to play for more time, while trying to realize a worldview that did not include a Palestinian state?

Netanyahu’s speech to the UN on Monday was predictable, even outdated. It was his ninth speech as prime minister at this forum, a forum he meticulously addresses every year in the fall. Each speech involves strenuous preparation over long weeks. As the date approaches, Netanyahu clears his calendar for that purpose, and almost completely devotes himself to corrections, changes and rehearsals of the speech. He labors over every comma and arms himself with an appropriate gimmick. Once it was a sketch of the Iranian bomb (2012), another time it was a diagram of the Auschwitz-Birkenau death camp (2009) and this year it was a photograph of rockets that Hamas hid inside a school in Gaza.

Netanyahu views himself as the leader of the Jewish people whose role is to save the nation from those who threaten it with extinction. Many segments of the Jewish population in Israel identify with this narrative. Communication Minister Gilad Erdan (Likud) stated after the speech on Monday that 80% of the Israeli public agree with Netanyahu. Erdan’s declaration is not far from the truth, but with one correction: We can assume that most of the Jewish public in Israel agrees with Netanyahu. Most probably, the numbers are entirely different within the Arab public in Israel. But in any event, Netanyahu does not talk to the Israeli-Arabs or represent them. His target audience in the UN is the Jewish public, or to be more precise: the Israeli right wing and the Jewish lobby in the United States.

Netanyahu is the perfect presenter of the Israeli right-wing stance in the battle with the Palestinians for the hearts and minds of the world. He knows how to plead his case (“But to defeat IS and leave Iran as a threshold nuclear power is to win the battle and lose the war”); he is a proud Israeli (“the brave soldiers of the IDF [Israel Defense Forces] … upheld the highest moral values of any army in the world”); and he knows how to engage an audience (“To say that Iran doesn't practice terrorism is like saying Derek Jeter never played shortstop for the New York Yankees”).

Netanyahu also knows, more than anyone else, how to closely link attempts to destroy the Jewish people in both recent and past history, to contemporary times. The Nazis, Iranians, IS and Abbas (“who wrote a dissertation of lies about the Holocaust”) — all these morph into Netanyahu’s concept of one large Islamic threat. His messages are accompanied by such snappy slogans as “Hamas is [IS] and [IS] is Hamas.” It’s as if he forgot that in the late war in Gaza, Netanyahu intentionally avoided overthrowing Hamas.

This time, circumstances helped Netanyahu to present his arguments relatively easily and elicit compliments from his party’s right-wing flank. Abbas’ belligerent speech only invited a counter-response from the prime minister, similar to the way that Hamas transformed the Israeli homefront into a battlefield in the summer’s Protective Edge campaign. However, Netanyahu knew that he had to throw in some kind of statement about “diplomatic horizons” this time as well, so he made abstract, vague mention of a diplomatic initiative, while abandoning the explicit statements he made in his Bar Ilan speech about a Palestinian state. He talked about willingness for painful compromises, and that “to achieve that peace, we must look not only to Jerusalem and Ramallah, but also to Cairo, to Amman, Abu Dhabi, Riyadh and elsewhere.”

This was an empty statement that predictably led to the never-ending question in the television studios and amid the Israeli center-left camp: Has Netanyahu really crossed the Rubicon? With these statements, the prime minister succeeded, quite skillfully, to cast doubts again among those who continue to hope that Netanyahu, like Prime Minister Ariel Sharon in his time, will see the light.