Why Bibi is rejoicing as Obama's term nears end

Israeli Prime Minister Benjamin Netanyahu told journalists that his relationship with US President Barack Obama got off to a bad start from the first minute, when Obama challenged him on settlement policy. 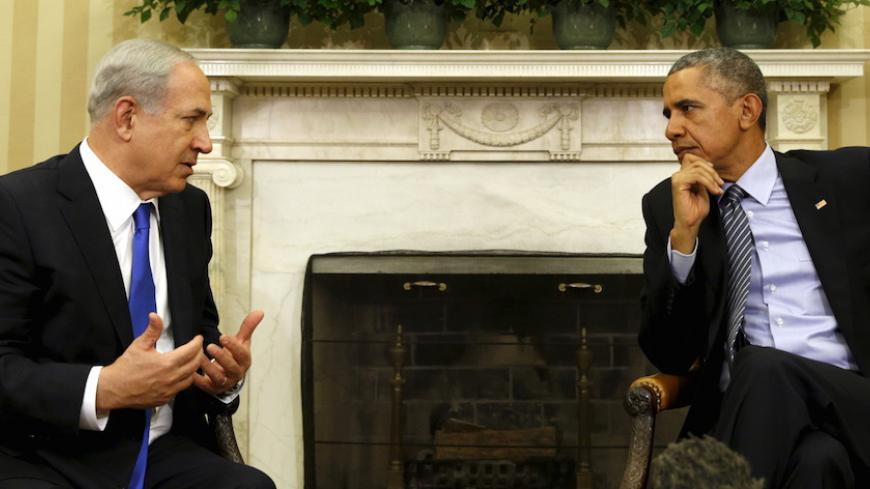 The most recent chapter in a series of meetings that Prime Minister Benjamin Netanyahu has been holding with journalists and other media representatives in Israel took place Aug. 23. His audience consisted of ultra-Orthodox journalists, representatives of a vibrant press that serves more than a million people. The briefing lasted 5½ hours, with a “cigar break” in the middle. Netanyahu may have the most challenging job in the world, but he acted as if he had all the time in the world.

The prime minister has held a number of meetings like this one over the past few weeks, with journalists from Israeli public radio, Army Radio, the editorial boards of Haaretz and Channel 2 and right-wing and independent-leaning journalists. There may be more to come. He has held dozens of hours of these “briefings,” in which he delivers a spiel to his audience, and it has been more amazing than ever.

Netanyahu has served as prime minister for more than 11 years, including seven consecutive years (2009-2016). At the small press gatherings, he has exhibited self-assurance, arrogance, joie de vivre, fluency on the issues and a fighting spirit. He is full of himself. He rants, he raves. He displays faint glimmers of a sense of humor, including of the self-deprecating kind, and a considerable talent for mimicking others.

There is no obvious answer as to why Netanyahu is investing so much time and energy in these background briefings instead of just giving an occasional interview to the Israeli media, which would itself be an unusual occurrence. Perhaps there are two reasons: The first is simply that he enjoys it. The second is that he is laying the foundation for his legacy and his own narrative on his time in office. He is already convinced of how great he is. Now he is trying to convince everyone else.

Netanyahu speaks freely in these talks, the content of which is not supposed to be published, but is nonetheless constantly leaked. On Aug. 23, he was frequently asked about his relationship with US President Barack Obama, the relationship between Israel and the United States and the US security aid package, the details of which have already been hammered out in Washington. Speaking to Al-Monitor on condition of anonymity, one person present at the event gave this account of what Netanyahu said: “We must not forget that President Obama told me at our very first meeting that the United States demands that Israel stop building everywhere in Judea and Samaria. I asked him about the Ramot neighborhood in Jerusalem, about Gilo and about settlements and regions that will obviously remain part of Israel even after a permanent agreement is reached. He refused to hear about it. So when we talk about whether or not there was any chemistry between us, we mustn’t forget how the relationship between us began, and what I had to deal with from the very first minute.” What Netanyahu actually explained to his audience was that Obama “marked” him from the very beginning, claiming that the prime minister was most to blame for the difficult relationship between the two men, which never took off.

Netanyahu was asked if he is worried about the possibility that Obama will take advantage of the period between the election and his leaving the White House to launch a new diplomatic initiative to resolve the Palestinian-Israeli conflict. “Happy is the man who is always afraid,” said Netanyahu, referencing the Book of Proverbs (28:14), but he didn’t elucidate. He then treated his audience to his mode of operation with regard to the United States: “Unlike China, for example,” Netanyahu said, “where the leader determines the agenda and everyone follows accordingly, the system that sets the American agenda is much more complicated. The president is not a one-man show. There is public opinion to contend with, there is Congress, and there is the media. Anyone who thinks that when dealing with America you only have to work with the president is wrong. You have to face the entire system.”

Netanyahu went on to present the journalists with Gallup poll results showing a steady rise in Israel’s standing and an increase in public support for Israel among the American public. “While it is true that we have a problem on the campuses, overall support for Israel in the US has never been higher, and that is what really matters,” he asserted decisively. “Israel is popular in the United States, and I’m popular in the United States too. If only I would be received in Tel Aviv the way I'm received in New York and Washington, and I’m not just talking about the Jews either.”

According to Netanyahu, the agreement on US security aid to Israel, soon to be signed, will be a good one. He said that Israel had received $3.1 billion a year until now and asked for that to be increased to $4.5 billion a year over the next decade. “We sealed the deal midway,” he said, “and in my opinion, that is more than reasonable.”

Here Netanyahu was manipulating his audience. What he failed to mention was that in addition to the $3.1 billion that Israel receives annually, it regularly asked for and received an additional aid bonus of $350 million to $600 million a year, to fund the Iron Dome anti-missile system. He also didn’t tell them that according to the terms of the new agreement, Israel will not be allowed to request additional aid, and the possibility of spending up to one-quarter of the funding in Israel itself will gradually be reduced to nothing by the end of the decade. Both of these changes to the aid agreement constitute serious losses for Israel. They reduce the purchasing power of the aid money and are likely to cause serious damage to Israel’s defense industries.

Netanyahu also omitted that had he abandoned his desperate struggle against the nuclear agreement with Iran right after it was signed, the Americans might have significantly upgraded the aid package. As revealed by Al-Monitor, that Netanyahu consistently refused to begin negotiations on aid until after the vote in Congress approving the Iran deal caused Israel enormous damage, estimated at more than $10 billion by Israeli security sources.

Netanyahu boasted to his audience about the relationships he has developed with various actors in the Middle East, including with leaders of countries that do not have official diplomatic relations with Israel. He then went on to hint about a remarkable turnabout on the diplomatic front. According to him, in terms of public relations, Israel’s standing and relationships in the Middle East and the Gulf are better than they are in Western Europe.

“I post frequently on YouTube and Facebook,” Netanyahu said proudly. “In this day and age, we are able to skip over the traditional media and regimes and to reach the people directly. My video clips have 40 million views outside Israel. That is an enormous, unprecedented number. The world wants to hear us. That is a fact. We safeguard the Middle East and protect Europe and America by our very presence here. I hope that I will soon be able to break up the automatic majority opposing Israel in the United Nations. The situation will only get better.”

That is Netanyahu, late summer, 2016. He is self-assured and optimistic, ready for a fight and glad to finally be done with Obama. If there is one thing he would rather not talk about, it's Obama's potential successors.