Israel's arrest of activists recruited by Hezbollah through Facebook reflects the organization's current strategy of encouraging attacks in Israel orchestrated from afar. 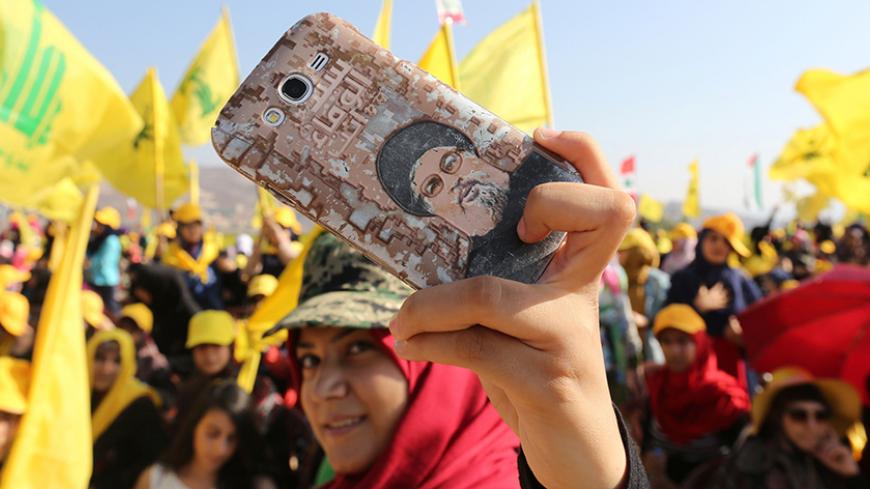 A Hezbollah supporter shows off a picture of Hezbollah leader Hassan Nasrallah on her phone during a rally marking the 10th anniversary of the end of Hezbollah's 2006 war with Israel, Bint Jebail, Lebanon, Aug 13, 2016. - REUTERS/Aziz Taher

Hezbollah Secretary-General Hassan Nasrallah broadcast a prerecorded speech from Bint Jebail, Lebanon, on Aug. 14 to mark the 10th anniversary of the war between Hezbollah and the Israel Defense Forces (IDF) in summer 2006. It was a typical Nasrallah speech that included all his familiar themes: Israelis had lost trust in the institutions that defend them, and the 2006 fighting had cast doubt on Israel’s ability to continue to exist at all. He said that Israel and its prime minister, Benjamin Netanyahu, are weak and tired and cannot defend themselves for much longer. He also mentioned his 2006 “spider web speech” — in which he said that Israel is weaker than a spider web — saying it demoralized Israelis at large.

While Nasrallah was still speaking, the “institutions that defend Israel,” in particular Shin Bet, released details about an interesting effort by Hezbollah to open a new terrorist front to operate in Israel. The new front would be controlled by Hezbollah activists from a distance, using Facebook, phony profiles on social networks and encrypted messages on the internet. The story was first reported in Israel on Aug.16 and included the names of eight Palestinian suspects from the West Bank, members of three separate cells, established to launch attacks in Israel. In each instance, Israel’s security institutions were able to arrest the suspects before they launched their operations.

In the surreptitious struggle between Israel and Hezbollah over the past few years, Israel has maintained the upper hand. As part of the struggle, Nasrallah has tried desperately to create a small-footprint front against Israel. In other words, he wants to foment a kind of anti-Israel terror not directly connected to Hezbollah to avoid giving Israel an excuse to attack his organization. Nasrallah cannot launch attacks from across the Blue Line, the international border between Israel and Lebanon, because he knows that doing so would result in an aggressive response by Israel. He also cannot let the situation deteriorate into a full-scale war, especially now, with Hezbollah sustaining hundreds of casualties and thousands more injuries in the blood-drenched Syrian quagmire.

At first, Nasrallah tried to create a second front against Israel in the Golan Heights. The rules of that operation called for low-key actions against Israel, without allowing the situation to devolve into a major conflict. Israel, however, has achieved a clear victory in the military and intelligence battle waged in the Golan Heights over the past two years. Nasrallah lost quite a few of his assets and people, including Samir Kuntar in December 2015 and Jihad Mughniyeh in January 2015, while Israel paid an acceptable cost for its actions. Furthermore, according to foreign news sources, Israel continues to attack strategic arms convoys heading from Syria to Beirut.

It is now clear that Nasrallah has changed course in creating terrorist networks directed by Hezbollah to attack inside Israel. The newly uncovered cells were recruited by two Hezbollah activists. One of them, who went by the name of Bilal, is based in Lebanon. He recruited Palestinians through the Facebook profile Falastin al-Houreh (Free Palestine). The second Hezbollah activist is a Gaza resident named Mahmad Faiz Abu Jedian. The recruiters followed identical tactics. They asked Palestinians who seemed to be leaning toward joining their cells to open secure email accounts, so they could communicate without being detected by Israeli cybersecurity. That was how they relayed instructions, orders and payments. Furthermore, Hezbollah sent special encryption programs to the new recruits for conducting secure communications.

Mustafa Kamal Hindi, from the Qalqilya region in the West Bank, was recruited in December 2015 to head one of the cells. Upon being instructed to attack IDF patrols in the Qalqilya region, he organized a cell of four people, who began training using hunting rifles and makeshift explosives. The members of his cell were arrested in June. A similar fate awaited the members of the cell recruited by the Gaza activist. Its members had also been told to launch operations, including suicide attacks and bus bombings, in Israel.

In each case, Hezbollah promised and in some cases transferred money to the recruits to fund their activities. In some instances, the men were promised sizable sums (30,000 shekels, about $8,000) upon completion of their missions. There was also an effort to recruit Israeli Arabs to join the cells, but these efforts were also foiled. Israeli Arabs continue to distance themselves from terrorism, with only an insignificant number actually taking part in such activities. In May 2016, Yoram Cohen, before stepping down as head of Shin Bet, disclosed that support for the “spirit of the Islamic State” among Israeli Arabs is the lowest in the entire Muslim world.

Hezbollah's recent activities exposed by Israel are just the tip of the iceberg. The rest lies well beneath the surface, where the two continue to clash at low intensity. It is also a battle of wits, with Israel trying to limit Hezbollah’s moves and prevent it from getting stronger. Meanwhile, Nasrallah is trying to keep the fire of his anti-Israel resistance burning, while minimizing the chances of triggering another conflict. He knows that he will not be able to fight such a war while engaged in the bloody war of attrition in Syria.

Nasrallah was right about one thing in his speech. Israel’s leaders during the 2006 Second Lebanon War have almost all been erased from the political and historical maps: Prime Minister Ehud Olmert is in prison; Defense Minister Amir Peretz was forced to resign; Chief of Staff Dan Halutz resigned; and IDF Chief of the Northern Command Udi Adam handed back the keys.

Beyond issues of personnel, however, Israel can look back contentedly at the war that took place more than a decade ago. It has enjoyed some 10 years of almost absolute quiet along its northern front. Hezbollah is drained and bleeding. Nasrallah has more or less resigned himself to fiery oratory, and Israel has managed to steer clear of the Syrian tempest. Israel is already signing on for 10 more years of the same. What about Beirut? That’s not entirely clear.