Will reforms require shrinking the size of Iraq's parliament?

Some parliamentary blocs' efforts to cut the number of parliamentarians is facing obstacles, including the constitutional quota system, which currently calls for an increase in members. 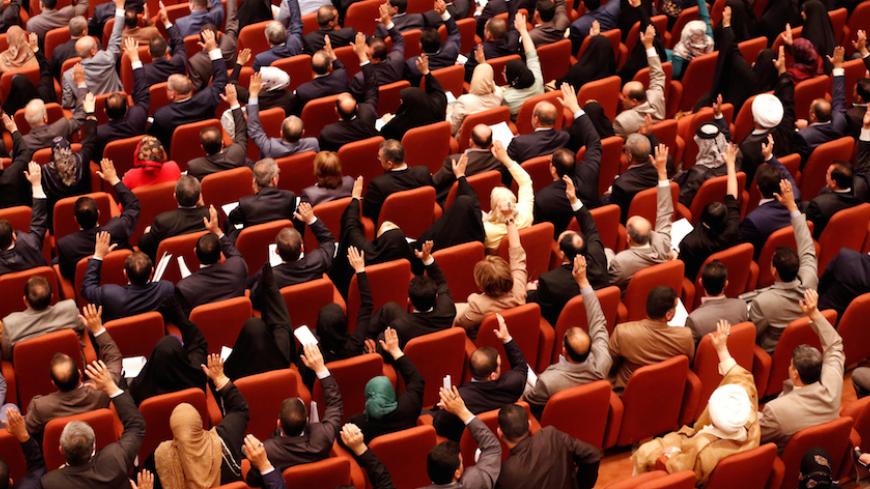 Members of the Iraqi parliament gather to vote on Iraq's new government at the parliament headquarters in Baghdad, Sept. 8, 2014. - REUTERS/Thaier Al-Sudani

BAGHDAD — According to several political blocs, Iraq's parliament is too big and the number of representatives should be cut significantly to improve efficiency, eliminate corruption and save money. Others say there should be more members because of a population increase and a cut would require a constitutional amendment.

The idea of reducing the number of parliament members is not new; the executive branch called for a cut Feb. 25. Prime Minister Haider al-Abadi said a downsizing would be a step toward reducing expenditures and bringing about the reform desired by his government. Abadi's Cabinet approved his sweeping reform proposals designed to eliminate corruption earlier this month, but they still need parliamentary approval. Hundreds of protesters have demonstrated in support of reform.

There are currently 328 parliament members. Abdul-Hadi al-Hakim, a member of the Citizens bloc, formally asked the speaker's office Aug. 11 to consider reducing the number of members. The parliamentary Legal Committee announced Aug. 19 it had received and deliberated the request. Sam Chawki, a Legal Committee member, said that so far the signatures of 78 parliament members who favor the reduction have been collected. The committee has also recommended that the issue be decided with input at the provincial level.

"If the 'yes' vote prevails [in the provinces], the number of parliament members will be reduced by more than one-third or probably by half," he said. This would result in each candidate representing about 250,000 people, rather than 100,000, Chawki added. "This is why the proposal was welcomed and supported by the majority of political parties.”

The latest statistics announced by the Iraqi Ministry of Planning said the population in Iraq has reached 36 million people, compared with 33 million in 2013. Thus, according to the constitution, 30 more parliament members should be added in the next term. In fact, a political consensus resulted in three members being added since 2014, when there were 325 members.

Hakim’s Citizens bloc asserted that the constitution is referring to one representative for every 100,000 Iraqis who are at least 18 and eligible to vote, not all Iraqis. However, the Supreme Court of Iraq refuted this interpretation.

Now, the only choice available for political blocs appears to be to convince each other to collect the largest number of votes to amend the constitution before trying to reduce the number of parliament members. This would require the country's president and prime minister, or one-fifth of parliament members, to propose an amendment.

There appears to be a readiness in parliament to reduce the number of its members. Yet will bloc and party leaders really welcome a change, or will they welcome it in the media while rejecting it in undeclared meetings? Some parliament members believe it is essential to establish a broad political consensus to ensure cohesive, real reform that must start with the country’s highest legislative authority.

During the Aug. 15 parliamentary session, where there was a debate on the topic, independent parliament member Hanan Fatlawi called for a reduction that will facilitate the overall effort to reform the government. Like many of his colleagues, he agreed that the number of parliament members is too high "and their presence in parliament sessions is not effective."

Over years, the quota system has become the foundation of Iraq's political system, so reducing the number of members will face many obstacles. Iraq’s parliament may not be able to reach a consensus on amending the constitution in the current term, so the proposal is expected to be deferred to the next term of parliament.