Is Iran judiciary open to negotiating on human rights?

Iran’s judiciary said that Iran has begun talks with the European Union in regard to human rights. 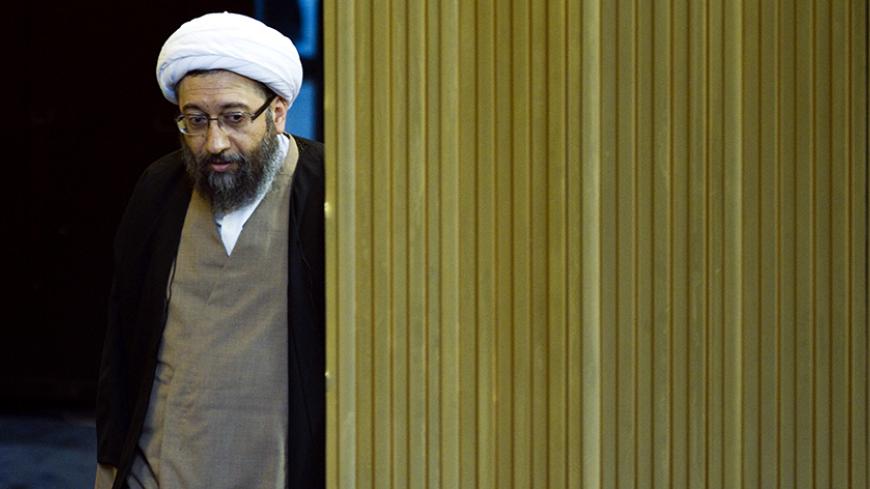 The head of Iran’s judiciary, Ayatollah Sadegh Larijani, made an interesting proposition to European countries during a speech Aug. 3 on the occasion of Human Rights Day in Iran. He said Iran is willing to hold talks on human rights as long as Europe is willing to also discuss the human rights situation in their countries.

“It cannot be that only Iran is questioned,” Larijani said. “It has to be two-way. We have questions for Europe, too.” He said that Iran wants to question Europe on the spread of Islamophobia, forced unveiling in schools and restrictions on discussing the Holocaust, specifically in France.

Iran, which has the highest number of people executed per capita in the world, has been on the defensive over the human rights reports issued by American and European organizations and the human rights sanctions issued by those countries. Iranian authorities, however, view this human rights pressure more as a political tool. “The West applies double standards with respect to human rights,” Larijani said. As examples, he raised the relationship of Europe and the United States with Bahrain despite its recent crackdown on clerics and dissidents. In regard to the recent scandal of removing a Saudi Arabian-led coalition from the child rights blacklist, Larijani said, “With their own dollars, they silence the secretary-general of the United Nations over the violation of children in Yemen.”

Addressing the United States and Europe, Larijani continued, “Today it has become clear to the world that your defense of human rights is a tool. Are there no human rights violations in the United States? In the 30-something years we have accepted millions of Afghan and Iraqi refugees while subjected to sanctions. European countries with all their wealth have [only] accepted a few thousand refugees.” Larijani also cited that Saudi Arabia beheads individuals in capital punishment, and that in the United States African-Americans are killed by the police, yet they are not punished on the grounds of human rights violations.

According to Larijani, the negotiations on human rights would be conducted by Iran’s Human Rights Council, the Supreme National Security Council and the Foreign Ministry. Mohammad Javad Larijani, who heads Iran’s Human Rights Council, said Aug. 4 that Foreign Minister Mohammad Javad Zarif has held preliminary talks on human rights with Federica Mogherini, the European Union's foreign affair minister. Javad Larijani, however, warned that Iran would not allow the West to “impose its views” of human rights onto Iran.

In other news, well-known conservative theoretician Hassan Abbasi has been arrested after an old video surfaced that showed him insulting Iran’s army. In the 2010 video, Abbasi had attempted to defend the Islamic Revolutionary Guard Corps (IRGC) and the Basij Organization against American accusations, saying, “You guys prefer something like the army that remains in its barracks without making noise. If the country is swept away by water, they will not make a noise or take a position.” While only a short segment of the speech was shown on social media pages, Abbasi’s comments were in defense of the IRGC and the Basij during the 2009 post-election crackdown.

A number of conservative analysts have come to Abbasi’s defense. Vahid Pouryamin argued that the statute of limitations for the charges against Abbasi, spreading lies and providing an atmosphere of skepticism against Iran’s armed forces, had expired according to the law. Afsaran website asked why Abbasi was arrested for his comments, yet Zarif was never arrested for his comments that the United States could easily take out Iran’s defense systems.