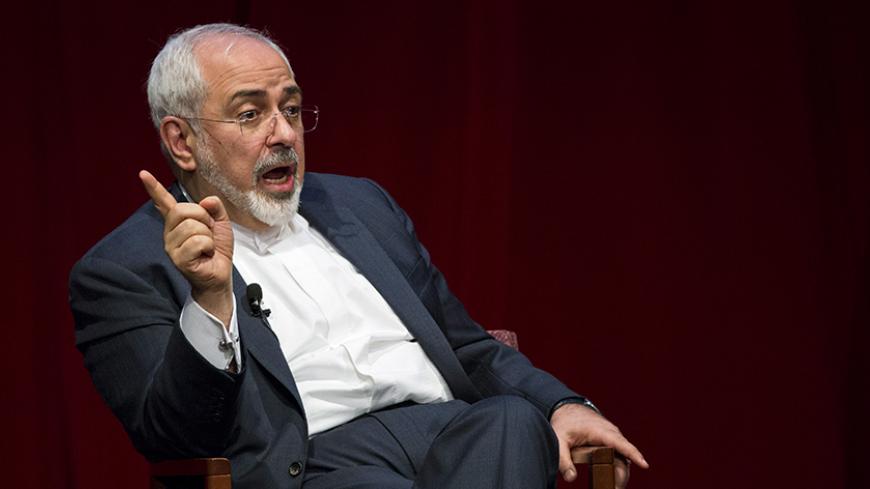 “Never threaten an Iranian,” Iran’s Foreign Minister Mohammad Javad Zarif kindly reminded Federica Mogherini, the European Union’s foreign policy chief — at least that’s the rumor going around. Russian Foreign Minister Sergey Lavrov reportedly added, “Nor the Russians.” According to Iranian state media Mehr News and Russian state-run news service RIA, the comments leaked by Russian sources were made after Mogherini threatened to leave the Iran talks in Vienna during a heated exchange over whether to lift a UN arms embargo on Iran, something both Iran and Russia support.

In an effort to seemingly clean up the leaked exchange that has made its rounds among Iranians and Iran watchers alike, a member of Iran’s negotiating team quoted Zarif as saying, “Ms. Mogherini has always had a very positive and constructive role in negotiations and our relationship has been governed by mutual respect and today also we had a very positive and constructive meeting.”

Whether the foreign minister’s response was verbatim or not, the Iranian people took Mogherini’s threat personally — or at least found some humor in it — when they went on social media to remind the EU’s foreign policy chief and the rest of the P5+1 (Britain, China, France, Russia, United States, plus Germany) through the hashtag #NeverThreatenAnIranian.

Quickly gaining traction online, the hashtag became a sensation in English and Persian. Everything from a beefed-up Zarif as the Hulk, blindfolded American hostages from the 444-day Iran hostage crisis, drawings of the ancient Persian King Cyrus the Great to fluffy Persian cats were the images accompanied by the trending hashtag. Some played along with Zarif’s stance, posting images of the foreign minister frowning and pointing his finger while yelling. Others took a peaceful posture of “Keep calm and #NeverThreatenAnIranian.”

A popular Iranian satirical Twitter account that mocks Iran’s mullahs (@tanasoli) tweeted, “#NeverThreatenAnIranian or they may come to negotiation table” while another account threatened the return of former President Mahmoud Ahmadinejad.

Some Iranians went as far as using #NeverThreatenAnIranian to draw attention to the plight of protesters during the 2009 post-election protests known as the Green Movement as a reminder to the Internet that Iran’s government already does a good job of threatening Iranians. Others voiced equal discontent at capital punishment in Iran by tweeting images of public hangings and firing squads. These serious sets of images seemed to make a point that threatening an Iranian was merely something the government was good at on a domestic level.

Taking advantage of the momentum online, the Iranian government involved itself in the hashtag and even started #EightyMillionNuclearTeam with a collective image of the Iranian people and an atomic symbol that reads “The Country of Iran and Dr. Zarif” are more powerful than the P5+1 and “we are [an] eighty million negotiating team” in reference to the country’s population. The government also made a presence on Instagram, using #NeverThreatenAnIranian to draw attention to the foreign minister’s statement in an effort to garner solidarity and support for Iran’s nuclear negotiating team and the country’s nuclear program.

Given that the sources of the leak were solely Iranian and Russian, it leads one to believe the statement was purely a propaganda tool to rally Iranians around the flag. Golnaz Esfandiari of Radio Free Europe/Radio Liberty warned people on social media not to believe everything one reads from Iranian state media since it’s “often used by the establishment for PR purposes.” At the same time, it’s not unusual that under pressure such comments would be made during heated negotiations. Ironically, an actual heat wave had hit the Austrian capital right around the time the leaks happened. During one late-night session, an electric ventilator and air-conditioning unit had to be placed within feet of Secretary of State John Kerry’s side of the table.

“It is bolstering Zarif’s already popular persona as a brave negotiator who is not willing to succumb to pressure or threats. It’s fomenting a sense of nationalism and pride among Iranians. It’s also a great piece of story for conservative naysayers on the fence,” said Reza Akbari, a senior program officer for the Institute for War and Peace Reporting.

Historically, foreign intervention in Iran has evoked nationalism among its people as demonstrated with the nationalization of Iran’s oil in 1953, the Iran-Iraq War and now the country’s nuclear program. In 2006, Ahmadinejad evoked the popular slogan, “nuclear energy is our inherent right” to draw attention to the country’s struggle to deter the West in halting its nuclear ambitions. Now with Zarif’s successful leading of the country’s negotiating team since 2013, he has evoked a popular following that has caused Iranians to compare him to Mohammed Mossadegh, the country’s democratically elected prime minister who was deposed in a coup d’etat orchestrated by the CIA and MI-6 after nationalizing the country’s oil. With the foreign minister’s supposed statement, he is garnering further support in the form of staunch nationalism to finalize a deal with the West. At the same time, he really didn’t need it. With years of sanctions and decades of international isolation, the Iranian people are in dire need of a nuclear deal with the P5+1.

For now, #NeverThreatenAnIranian is an entertaining hashtag that keeps eager Iranians occupied as they wait for a life-changing deal during the final showdown at the Iran talks in the coming days.