Why some are accusing Rouhani of playing the woman card

Iran's President Hassan Rouhani has ordered the cancellation of the annual Civil Service Examination over allegations of discrimination against women. While some hail the decision, others accuse him of playing the "woman card" ahead of the 2017 presidential vote. 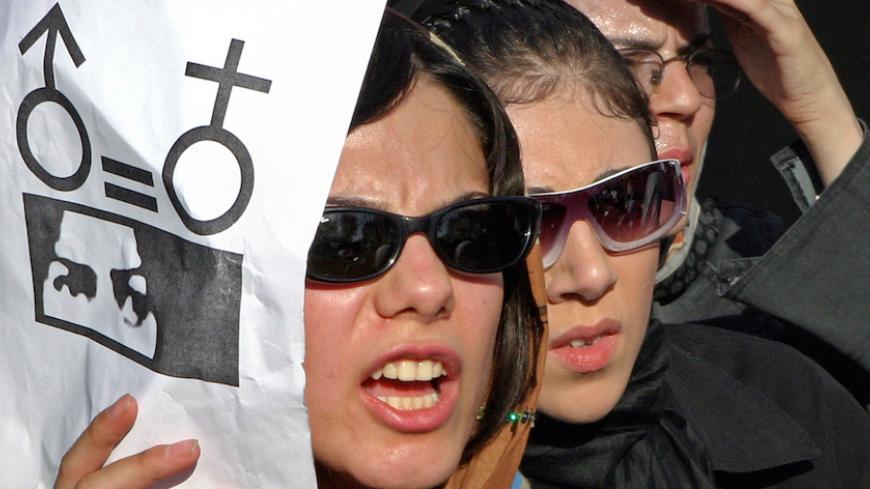 TEHRAN, Iran — President Hassan Rouhani cited "lack of justice in the employment process" when he ordered the cancellation of the third Civil Service Examination on July 31. Over 2,800 job opportunities at 12 state bodies were up for grabs in the test, which was due to be held in September. Rouhani further tasked the Management and Planning Organization with ensuring "women's employment rights by amending the gender-related quotas and informing the Cabinet about the results."

The order was reportedly issued on the request of Vice President for Women and Family Affairs Shahindokht Molaverdi. On July 26, the semi-official news agency ISNA quoted her as saying that she had "sent a letter to Vice President Eshagh Jahangiri about gender discrimination at this year's exam."

Al-Monitor contacted Molaverdi for more insight into what prompted her to reportedly sound the alarm. She told Al-Monitor, "Based on the job titles and the number of positions allocated to women, we concluded that their share of the jobs has not been met."

Moreover, Molaverdi denied that Rouhani had acted upon her department's advice, saying, "We only monitored the public's and online community's reactions and reported them to the president. Thus, a decision was made to halt the exam until gender equality is fulfilled."

The vice president declined to further comment on the matter to Al-Monitor, saying that she "avoids creating controversy and prefers to have calm, expert-level discussion about it."

What Rouhani was referring to when citing "unfair quotas" is the number and proportion of positions earmarked for women in the exam booklet.

Of the 2,800 jobs up for grabs, at least 886 were exclusively allocated to men. In contrast, less than half as many jobs — 404 — were allocated to female job-seekers. Of the latter 404 positions, 360 were offered by the Education Ministry and 41 by the Prison Authority. Moreover, only three positions were offered to female applicants at the Judicial Organization of the Armed Forces, while the other 77 positions at the same body were for male applicants. Of note, the Islamic Development Organization put forth zero openings for women, offering all 44 vacancies to male clerics. The remaining 1,570 positions do not appear to have been earmarked for any particular gender.

While the exam controversy is merely over a few hundred job openings, the significance of the issue at hand comes to light when put in the context of broader unemployment trends and female education.

According to the Statistical Organization of Iran, unemployment in the last quarter of 2015 was 9% among Iranian men, and more than twice as high, at 18.9%, among women. The situation is more alarming for young women. The jobless rate for women between the ages of 15 and 29 is 38.5%. Meanwhile, the majority of Iranian university students are women. In the academic year 2013-14 alone, over 21,400 female students graduated from universities with master's degrees, while 2,700 women received doctorates.

Rouhani's order to delay the exam has triggered a variety of reactions. Tayyebeh Siavoshi, a female lawmaker from Tehran, expressed support for the move in an Aug. 3 op-ed for news website Fararu. She argued, "Iranian society must have a realistic view of women's unemployment and a change in women's lifestyle as the number of single women [who live alone] or are breadwinners for families is rising." Siavoshi added, "Whether we like it or not … the issue of female unemployment is now on the front burner and it cannot be seen as propaganda or a second-tier policy as there are more and more educated women [who need jobs] … hence, it seems that based on such an argument, the president decided to halt the exam."

Meanwhile, Fars News Agency cited previous remarks by the interior minister and the government's spokesman as proof that the Rouhani administration had no intention to employ anyone in the first place and concluded that the president's July 31 order was mostly for propaganda purposes.

Of note, only three days before the cancellation of the exam, Interior Minister Abdolreza Rahmani Fazli said, "There will be no more state employment as the government has no capacity to accept more civil servants."

Al-Monitor discussed gender discrimination in the exam with women's rights advocate Touran Valimorad, who runs Iran Zanan Network, a nongovernmental organization dedicated to women's affairs. Valimorad told Al-Monitor, "Nobody doubts the importance of eradicating discrimination against women and paving the way for them to have equal opportunities. But Rouhani's record in the three years of his presidency is very poor when it comes to women's rights or tackling discrimination against them. What they [Rouhani and Molaverdi] have done so far has been nothing but talk and bombastic propaganda."

Valimorad, whose NGO's efforts to institute changes to inheritance laws have resulted in several legal changes in favor of women, added, "The task of revising the gender-related quotas — given to the Management and Planning Organization — won't lead anywhere. Such missions should be assigned to women because they are capable of finding solutions and fixing the problem."

But has Rouhani really stood by women?

Azar Mansouri, a female member of the Islamic Iran Participation Front, a Reformist faction close to former President Mohammad Khatami, gives Rouhani "a fair grade" when it comes to women's affairs. In an Aug. 2 piece in Farheekhtegan Daily, Mansouri wrote, "The president has paid attention to gender equality from the very first day. … Rouhani changed a series of trends that had eroded women's effectiveness in society and reversed some previous decisions, including gender segregation at universities," further expressing hope that "such a trend will continue in the future."

Not everyone shares that optimism. A prominent female Iranian academic who spoke to Al-Monitor on condition of anonymity asked, "What gender equality [is there] when there is not even a single female minister in the Cabinet? If he [Rouhani] thinks women are as powerful as men, why did he not appoint a female minister? If he [on the other hand] thinks they are not capable enough … well, then it is a feeble excuse and even worse." She added, "It would be better for the president to start restoring women's rights within his own Cabinet. Instead of demoting a female vice president to being an aide, he should promote a woman to become a minister."

In this vein, the academic said she believes Rouhani's order is "political rhetoric as we are approaching next year's [presidential] election." Women's rights advocate Valimorad echoed the same line of reasoning. As she tells it, Rouhani and his team are merely "toying with women's grievances in order to win their game of thrones in 2017."