Iran's female editors rise to the top despite challenges

Despite a growth of female journalists in Iranian media, they still face various barriers and limits. 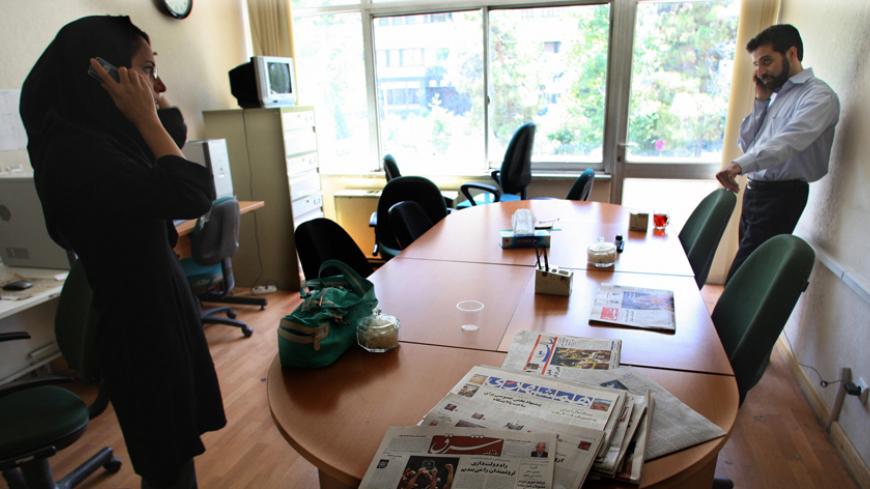 In spite of government pressure on Iranian journalists and women, the number of women serving on the editorial boards of Iranian newspapers has increased in recent years. However, discrimination against women by their male colleagues is still a serious issue.

No precise statistics are available on Iranian journalists in general, let alone female journalists. According to the Ministry of Culture and Islamic Guidance, as of March 2010, Iran had a total of 8,044 journalists, 3,455 (42%) of whom were women.

The number of female journalists in Iran has increased significantly over the past two decades. A 1992 survey found that among Iran's 2,145 journalists, 278 (13%) were women.

Female editors and journalists have taken on important leadership positions at Iranian publications. For instance, Shargh Daily employs females as editors of their international, social and literature sections. At Etemaad Daily, women make up almost half of its editorial board. Ghanoon Daily and Andishe-Pooya Monthly, a prominent intellectual publication, employ females as deputy editors-in-chief. Shahla Sherkat, one of Iran's most experienced journalists, is editor-in-chief of Zanan-e Emrooz Weekly, a publication that advocates women's rights. Likewise, the following publications have female editors: Iran-e Farda Monthly; Nationalist-Religious Party Journal (run by Melli-Mazhabi, a prominent opposition group); and the arts publication, Cinema-Adabiat Monthly.

Female journalists have even a significant presence in conservative publications such as Mosalas Weekly, which employs a female as editor of its international service, and where seven out of 20 members of its editorial board are women.

A communications professor at Tehran's Sooreh University told Al-Monitor that approximately 80% of his students are female. The professor believes that certain social and economic factors propel Iranian women to the profession. “In Iran, journalism is a low-income profession without proper job security,” he said. “These are not vital factors for women, but it is not the case for men. I know a lot of male journalists who have left the job after marriage. On the other hand, there are a lot of women who seek a good social status, even with a low income. They can achieve this goal through journalism."

Though there is a relative gender balance in terms of employment at Iranian newspapers, female journalists still admit to obstacles in the profession.

A female journalist at the Reformist Ebtekar Daily told Al-Monitor on condition of anonymity, "Although the number of female journalists has increased in editorial boards, they have limited power in sensitive cases. For instance, editorials are written by female journalists only once every one or two months. In most cases, they want us to prepare field or local reports. Therefore, we often provide content in entertainment, incidents and local services, and important interview coverage is usually given to men. For instance, they do not send a woman to interview Ayatollah [Akbar] Hashemi Rafsanjani. Political and diplomatic analyses are also written by men."

She added, "Although the number of female managers and editors-in-chief has increased, the female-to-male ratio is still very low. I can say it is 1 to 10."

A senior male journalist at Etemad Daily, in an attempt to reject claims of discrimination, unwittingly confirmed the existence of discriminatory views toward female colleagues. “I can tell by my personal experience that women do not put enough energy on theoretical issues. They read less than their male counterparts. They do not go deep enough into the issues. They do not sacrifice their lives for their work, and they suffice to a level of knowledge and do not go further,” he said. “It does not have anything to do with gender. It is an excuse. No one can write an editorial without having enough knowledge … but it is possible to provide a report on drug abuse with limited knowledge. We had some good female editorial writers in the past 10 or 15 years, such as Farzaneh Roostaei, Jila Baniyaghoob and Shadi Sadr. So it is not about discrimination. Actually, women are not as serious as men in managerial, theoretical and analytical issues. I do not mean that the male-dominated view is completely out of the picture. I just believe that it is not the main reason."

This view was echoed by a female journalist and women’s rights activist. She told Al-Monitor on condition of anonymity, "I think we cannot progress any further through feminist and anti-discrimination activities. Female journalists need to read more, sleep less and work harder to be able to stand in a more equal position."

The issue of sexual harassment also continues to plague female journalists. A female journalist at Fars New Agency, which is close to the Islamic Revolutionary Guard Corps, discussed gender-related pressures. "They pay more here, but there is also more ogling among high-ranking male workers in editorial boards,” she said.

A media manager who is close to the government said, "The work environment is sometimes insecure for female workers. Abuse by some male journalists to pursue their unethical desires sometimes prevents women from progress and sometimes leads to unprofessional and sudden advancement."