Israel might be confronted in October with a new reality, where Hamas takes over some West Bank municipalities. 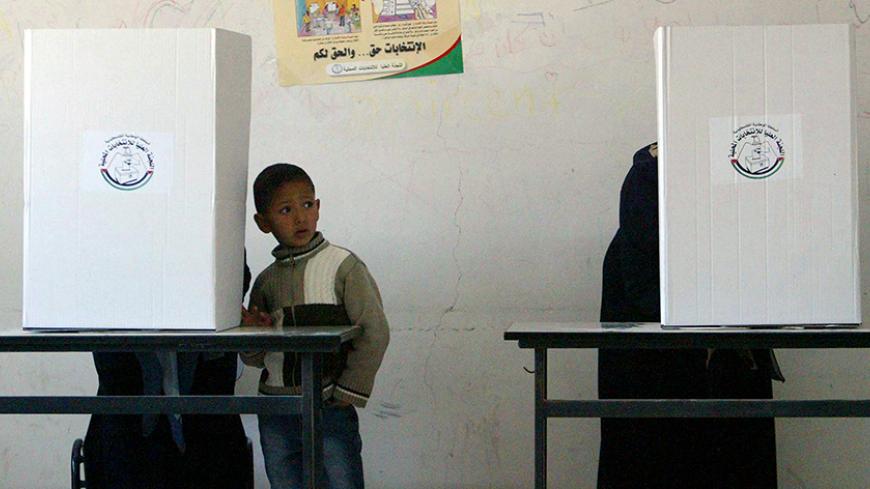 Palestinian women vote in the village of Bani Naim during the last round of municipal elections, West Bank, May 5, 2005. - REUTERS/Ammar Awad AWA/GOT

Municipal elections in the West Bank and Gaza Strip are slated for Oct. 8. On the face of it, this is a local matter that should not be of much concern to Israel’s decision-makers or the public at large. However, the Hamas-Fatah agreement for holding municipal elections that was reached in the setting of their reconciliation efforts and following their endless talks since the May 2011 Cairo Agreement is not only an internal-local issue. It is also liable to further complicate the already complex relationships between Israel and the Palestinian Authority (PA).

For the first time in over a decade, the elections will take place in some 300 municipalities, villages and regional councils across the West Bank and Gaza. The last time PA President Mahmoud Abbas agreed to hold elections — or more precisely was forced to hold them by former US President George W. Bush — was in 2006. Back then, Hamas took everyone by surprise, winning the seats to the Palestinian parliament by a landslide. And even though the upcoming elections are neither for the presidency nor for the parliament, senior Fatah officials, as well as Hamas officials, are nevertheless convinced that they will see Hamas win over a large number of local authorities in the West Bank, thus indicating that it is poised to take over power centers outside Gaza.

Ever since Hamas’ coup in Gaza in 2007, the areas of the PA have been clearly divided: Gaza is under Hamas’ control whereas the West Bank remains under Fatah’s near full control. It is not unreasonable to assume that this division is now about to change. Speaking to Al-Monitor on condition of anonymity, senior Fatah officials have said that Abbas does not rule out the possibility that Hamas will see victory in many local authorities across the West Bank and could even cause the tables to turn in major towns such as Hebron, Jenin and Nablus.

So why did Abbas agree to hold elections whose results could embarrass both him and his movement? And on what is the previous scenario that foresees a significant achievement for Hamas based? Although the Palestinian Center for Policy and Survey Research has yet to release the results of its public opinion polls, senior Fatah officials are fully aware of the trends on the ground. During the 2006 elections for the Palestinian parliament, Hamas managed to win thanks to an across-the-board protest of the majority of the Palestinian public that wanted change and wanted to take revenge against the members of the Fatah movement whom they perceived to be corrupt and responsible for the economic situation and the ongoing Israeli occupation.

Fatah activists who spoke to Al-Monitor in recent days say that they are concerned the current atmosphere among rank-and-file Palestinians in the West Bank is similar to that of 2006, which is further evidenced by the “individual intifada” of the past year. West Bank Palestinians are disheartened by the political-diplomatic situation and are greatly disappointed with the conduct of the Fatah movement, whose approval ratings have significantly dropped in recent years. Given this climate, the movement might face a crushing defeat in the municipal elections in the West Bank, thus handing Hamas a victory in some of the local authorities on a silver platter. It is not impossible that this will usher in a major change at the end of which Hamas will have gained control over PA institutions.

Speaking on condition of anonymity, a senior Fatah official in Ramallah claims that many of his colleagues cannot comprehend what prompted Abbas to hold the elections despite knowing that a defeat is inevitable. The only explanation they can come up with is that the president is fed up with the diplomatic stalemate, as well as with the lack of interest by the international community in the Israeli-Palestinian conflict and mainly with Israel's nonstop construction in the settlements that systematically undermines any possibility for reaching a two-state diplomatic solution. Abbas is willing to push forward the internal Palestinian reconciliation even at the risk of losing some of his movement’s significant political strongholds. A Hamas victory in the upcoming October municipal elections could send a clear message to Israel as to what the future holds if it were to pursue its current policy.

In less than two months’ time, Israel could be facing a new reality whereby Hamas has its feet firmly planted in the West Bank. It is hard to predict what Jerusalem’s reaction will be, and particularly what will be the reaction of the defense establishment that is now headed by Defense Minister Avigdor Liberman. What is certain, however, is that security tension in the area, which has already been running high in the past few months, will be further intensified.

The situation could also very well bring about change in the Gaza Strip. Senior Gaza-based Fatah officials have ramped up preparations ahead of the elections. Having felt battered for the past 10 years (since Hamas rose to power in Gaza), Fatah activists have been working on the assumption that they could win many protest votes from Gaza residents who are sick of Hamas’ rule. Hence, it appears that Hamas, too, could stand something to lose in the upcoming elections. According to the senior Fatah officials who spoke with Al-Monitor, Hamas has long been sending Abbas signals that it is willing to make headway toward reconciliation.

This could prove to be a golden opportunity for the organization’s leaders to take off some of the heavy burden resting on their shoulders. If Fatah were to take over some of the local authorities in Gaza, it will help resume the infusion of money from European Union countries that have refused to donate funds to Hamas. The movement has been desperately looking for solutions to its dire budgetary constraints that have prevented it from paying salaries to its civil servants.

The Israeli intelligence community is well aware of these scenarios. Begging for assistance for months, Hamas is about to be thrown a lifeline that it plans to take advantage of in order to gain traction in the West Bank.