Sisi on corruption in local governments: 'What can I do about it?'

With the enactment of a new law on local governments, Egyptian President Abdel Fattah al-Sisi hopes to curb corruption in municipalities. 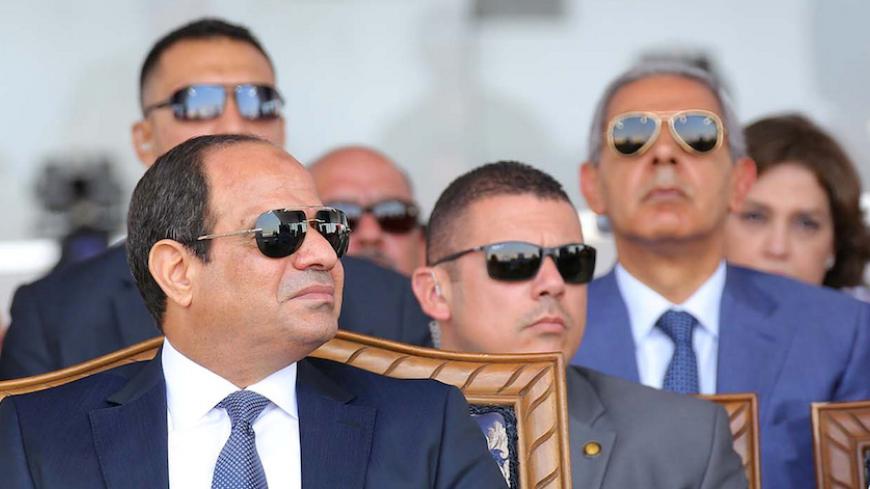 “What can I do about it?” This was Egyptian President Abdel Fattah al-Sisi’s response to a question posed by a participant in the first forum of the Presidential Leadership Program early this month about how to fight corruption in municipalities.

“Egyptians will serve their country through electing efficient young men and women who want to take the responsibility of the municipalities,” he said.

Sisi’s statements include an implied understanding that corruption is spread throughout the municipalities. Despite the difficulty in tracking these incidents of corruption and determining how much they cost Egypt, the Forum for Development and Human Rights Dialogue (Moltaka) has estimated the money wasted in municipalities due to corruption to be 494 million Egyptian pounds ($55.6 million), and they estimated that 17 million Egyptian pounds ($1.9 million) have been embezzled during the first half of 2016. The study was based on an analysis of the incidents of corruption published in 12 Egyptian newspapers. According to the study, corruption in municipalities ranked first, as it represented 65% of the overall corruption.

According to Articles 175 and 176 of the Egyptian Constitution, the state is divided into administrative units including governorates, cities and villages. The state guarantees support of administrative, financial and economic decentralization. The law regulates the means to enable the administrative units to provide, advance and regulate local facilities.

Law No. 43 regulates the work done by the local units, as it states that the units are responsible for founding and running all public facilities in their jurisdiction and that they have the same specializations as the ministries, with the exception of the national facilities that have a wider range of activities that includes the whole geographical range of the state such as mail service, security and railways.

The Center for International Private Enterprise’s project to "Promote Transparency & Combat Corruption in Egypt” issued in 2010 a paper titled “Decentralization and Curbing Corruption in Local Government: Impact on Small- and Medium-Sized Enterprises.” The paper attributes the outspread of corruption in local governments to the overlap in oversight responsibility with executive agencies in municipalities, to the establishment of special funds that are in accordance with accounting systems outside of the public budget and to the poor conditions of employees at local government bodies, as they receive the least wages compared to workers at different state sectors.

“Corruption can be found in all service private sectors, not only the municipalities,” said Fathy al-Sharqawy, a member of the Local Government Committee in the Egyptian House of Representatives. According to Sharqawy, corruption has become clearer due to the loss of “the prestige of the state” after 2011, which resulted in corrupt officials in housing, utilities and education sectors not fearing the consequences of their corruption.

In May 2016, the government announced a new law on local governments that grants members of local councils the right to submit motions to interrogate local officials. With a majority of two-thirds of the council members, they can withdraw confidence from the official who was proven to have committed the accusations entailed in the interrogation. In such case, the official should be prevented from carrying on in the position, and if the official was the governor or any of the deputies thereof, the matter is referred to the president to take the necessary action.

Sharqawy is counting on the new bylaw on local governments to reduce the weight of corruption in municipalities. He considers that the bylaw would grant local government councils greater privileges that would enable them to carry out their missions. Sharqawy also expects that these councils would control corruption that drains its resources.

Under Article 180 of the Egyptian Constitution, each local unit shall elect a council for four years. The candidate should not be less than 21 years old, a quarter of the total number of seats is dedicated to the youth under 35, a second quarter is dedicated for women, and the percentage should include a considerable representation of Christians and those with disabilities. Workers should be given considerable representation through workers’ seats of no less than 50% of the total seat count.

Sharqawy expects that the youth would succeed once they lead local councils. According to him, the youth are more active and have the potential to create change in their societies. However, he warns about members of local councils exploiting the privileges granted to them to fulfill personal interests. He insists that a mechanism to monitor these privileges, which are granted under the law, should be used.

Sayyed Gomaa, a former member of a local council in Gharbeyya governorate, told Al-Monitor, “Having so many specializations at local councils is the main reason these councils suffer from cases of coruption. Any privileges granted to their members cannot be stopped." He added, “Until local councils were dissolved in 2011, many of its members had been involved in bribes in return for easing up infringements, such as granting building permits for unqualified buildings.”

Gomaa added that Sisi was clear when he expressed his inability to fight corruption in municipalities on his own. However, Gomaa sees that Sisi, as the head of the executive power, is totally supported by all institutions of the state and has all the tools needed to wipe corruption. Gomaa expects that we will witness in the next few months a fierce campaign adopted by the presidential institution to curb corruption in municipalities.

According to Gomaa, the youth need training on how to work in the field and on planning before participating in local governments. He believes that municipalities need people who have plans on how to advance them and end corruption more than they need the youth. However, Gomaa said that the youth still have potential that allows them to implement these plans appropriately and spot any incidents of infringement or corruption.

Mustafa Shelbaya, the coordinator of the Municipalities are for the Youth campaign, disagrees with Gomaa regarding the youth not being able to plan the advancement of municipalities and end corruption. He told Al-Monitor, “The campaign aims at preparing the youth to engage in the municipalities’ elections.” According to him, thousands of the campaign’s youth throughout the country are receiving training sessions under supervision of specialists in public finance, law and local development to qualify them to engage in fieldwork.

Shelbaya listed the aspects of corruption in municipalities. According to him, some officials take bribes to grant building permits for unqualified buildings or to commercial permits for an illegal commercial activity, while other local officials neglect to do their work. “The campaign is working on training members on the legal means to fight all aspects of corruption,” Shelbaya added.