Parliament hopes to pass a bill yet this year to tackle corrupt municipal workers in Egypt, even as the federal government is cracking down on protesters who are trying to take on alleged malfeasance at the highest levels. 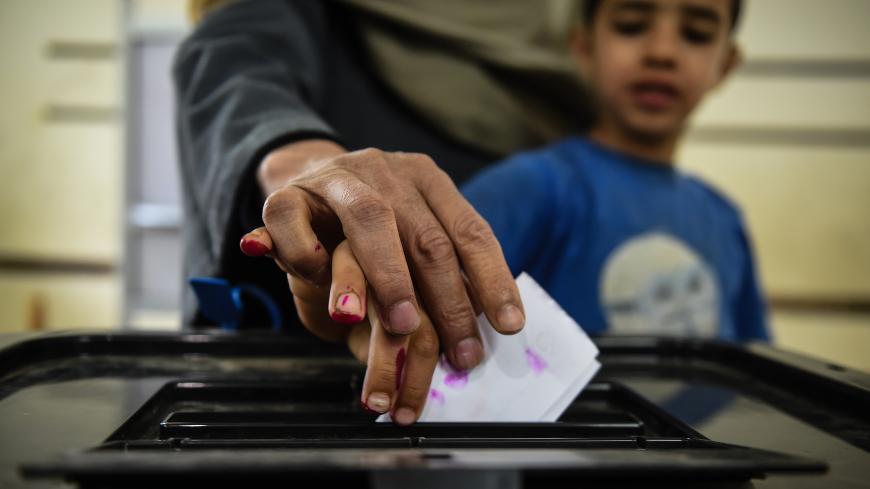 An Egyptian casts his ballot with a child at a polling station, Shamma, Egypt, April 22, 2019. - MOHAMED EL-SHAHED/AFP/Getty Images

CAIRO —  A bill designed to crack down on rampant government corruption at the local level and implement significant reforms is making its way through Egypt's parliament.

Municipal corruption has run amok without local councils' oversight, according to sources who spoke with Al-Monitor. The last local councils were dissolved by the Cairo Administrative Court following the 2011 revolution. While municipal employees are appointed by the state in Egypt, local councils are elected by the people and tasked with monitoring municipalities' performance.

Parliament Speaker Ali Abdel Aal said Oct. 1 during the first meeting of the fifth parliament session that substantial reforms will be carried out and local council elections will be held, the first since 2008.

​Mohammed Salah Abu Hamila, a member of parliament’s Local Administration Committee, told Al-Monitor parliament will discuss the local administration bill within the next 60 days, and once the bill is adopted, local council elections will be scheduled, probably in early 2020. The committee has finished discussing the draft law of April 2017 and submitted it to the general secretariat of the parliament for discussion, but it has yet to receive amendment proposals from the government and parliament.

Abu Hamila said both parliament and the government believe that the lack of municipal services and the intransigence and poor performance of municipalities have contributed to public discontent that led to protests that began Sept. 20 in Cairo and several other Egyptian cities. The demonstrations came in response to calls by Egyptian businessman Mohamed Ali, who accused President Abdel Fattah al-Sisi, his family and army leaders of financial corruption. Thousands of people have been arrested in the protests.

Amar Ali Hassan, a professor of social and political science at Helwan University, told Al-Monitor that part of the problem is that "local council elections were not envisaged by the current regime."

"They were perceived as unimportant,” he said. “But the state realized that these elections have become a necessity in the wake of the recent demonstrations that reflected a gap between the state and the citizens and showed that municipalities are not playing their role effectively.”

Hassan said the political turmoil in Egypt since 2011 prompted successive authorities to postpone municipal elections. Following the parliamentary election in 2015, there were reports that municipal elections would be held every year. However, no noticeable progress has been made in this regard.

Corruption in some municipalities has reached absurd levels, sources said.

In the southern Giza district of Haram, as soon as people learn that municipal patrols are about to enter the district, they rush to close their coffee shops, while street vendors attempt to dodge the patrols. Coffee shops are sometimes fined for "disrupting traffic" with their outdoor chairs and tables. Vendors who display their products in the streets also face the patrols' wrath. Bribes are seen as the only other way around the patrols' inflated enforcement efforts.

Mahmoud al-Sayyed manages a popular coffee shop in Haram. When asked about the municipality in that district, his face reddened and he said, “Let’s talk about something better."

He did say, however, that he pays a municipal employee — in cigarettes and drinks — every day to warn him whenever a patrol is on its way. It doesn't always work.

An official in the municipality told Al-Monitor on condition of anonymity that citizens resent municipal employees because of the heavy fines they impose and because they constantly need to be bribed to issue routine construction, water and electricity licenses or permits for new restaurants or shops.

The official said these employees also make things worse by accepting bribes to issue permits for improper or dangerous construction that adds pressure on the infrastructure. They allow the construction of additional floors that breach engineering plans and overwhelm available resources such as water, sanitation and garbage collection.

He pointed out the example of a municipal employee who earns an average of 1,700 pounds, or $104.50 per month, yet has a car worth more than half a million pounds, or $30,700. That worker is accepting bribes, he added.

The official said there are also municipal employees who bribe their bosses to appoint them to specific departments where bribes are a dime a dozen. Another problem, he said, is that authorities often appoint retired army officials or people who were at the top of their class as mayors who lack competence in local administration.

“In Giza, for example, the official responsible for the inspection of engineering plans is a graduate of the Faculty of Agriculture,” he said.

“The state is pushing municipal employees toward corruption,” he added.

Abu Hamila did not deny the rampant corruption in local councils. He cited the absence of oversight for more than 10 years.

During the Youth Conference in July, Sisi accused municipalities of corruption, of failing to fulfill their roles and of allowing infringements on agricultural lands.

Ahmed Juma Mahgoub, an insurance worker in Giza and a municipal affairs activist, intends to run in the local council elections. He told Al-Monitor, “Instead of organizing the affairs of districts, municipalities are making things worse."

On his Facebook page, Mahgoub publishes posts in which citizens complain about the municipality and the reluctance of its employees to address people’s problems.