Egypt’s Dar al-Kiswah — a monument turned into a dump

After Egypt stopped producing the Kaaba’s kiswah in 1961, the centuries-old site of production now lies in a state of utter neglect amid calls for renovation by nearby residents and experts. 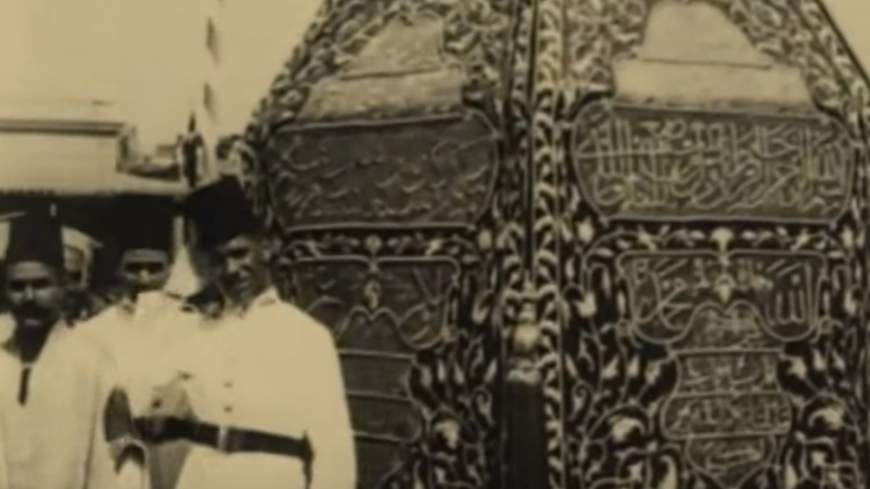 The kiswah, the traditional cloth that covers the Kaaba in Mecca and is replaced annually, is displayed in Cairo on May 10, 1926, before it begins the procession to Mecca known as al-Muhammal. - YOUTUBE/islamstory
Amal Magdy
August 16, 2016

CAIRO — Times have changed, and a place that Egyptians have long taken pride in is now victim to negligence, only containing some old equipment and garbage. The 200-year-old Dar al-Kiswah, which for over a century and a half boasted the honor of producing the kiswah — the traditional cloth covering the Kaaba in Mecca that is replaced annually during the hajj — has now turned into a storage space for the Egyptian Ministry of Endowments.

The historically and spiritually significant Dar al-Kiswah is located in one of Cairo’s narrow streets — al-Khoronfesh street in al-Gamaleya neighborhood. Recognized only by nearby residents, the place’s features have been obliterated and a sign with the name “Dar al-Kiswah al-Sharifa” (House of the holy Kiswah) now hangs on a steel gate that replaced the historic wooden one.

Ali al-Dumyati, 72, the owner of one of the shops facing the Dar al-Kiswah building, told Al-Monitor, “I was a young man when the kiswah used to come out of that ancient building amid celebrations, before being paraded across Egypt’s old neighborhoods, starting from al-Khoronfesh, crossing Fatimid Muizz street, then al-Hussein neighborhood. After that, the parade would head to Suez province where the kiswah would be transported aboard a ship to the holy lands.”

“We took pride in being the makers of the kiswah, wishing Egypt would continue to send it to Saudi Arabia,” he added.

Dumyati added, “We’ve urged the government to look after the building, especially after the residents started to litter in its vicinity, but to no avail. From time to time, we hear about plans to renovate Dar al-Kiswah, but years have gone by and the situation is only getting worse.”

Mohammad Yasin, 84, described the activities within the building, saying, “I used to visit the place frequently when I was young. I would enter the place to distribute milk to the textile workers embroidering the cloth. Work had never stopped throughout the year.” He added, “The inside of the building is a piece of art, decorated with Islamic embroideries. But now even the annexed mosque is closed because of the garbage scattered everywhere.”

Yasin added, “The building was turned into a storage space for the Ministry of Endowments. Every once in a while, the doors are opened for a ministry official to come in and store carpets, fans, wood and other artifacts, before scheduling an auction to sell them. But we have been asking the government to turn Dar al-Kiswah into an Islamic museum. After all, it is a historic site that should not be left in such a moribund state.”

According to some historical sources, the production of the Kaaba’s kiswah began in Egypt during the Fatimid era (909 to 1171). However, given the world-class quality of Egyptian cotton and the skilled Egyptian textile workers, other sources argue that the tradition dates back to Umar ibn al-Khattab’s era (633-644), the second of the Rashidun caliphs who succeeded the Prophet Muhammad. During the era of Sultan al-Nasir Muhammad ibn Qalawun (1293-1341), an Egyptian endowment was entrusted with funding the production of the kiswah.

Since the Mamluk era (1250-1517), the kiswah came out in a great parade called “al-Muhammal” headed by camels carrying the kiswah in a wooden cubic howdah with a pyramidal top. The ceremony, attended by the Mamluk ruler or sultan, would usually kick off in a festive atmosphere, as the parade was accompanied by singers playing the drums and bearing flags.

As for Dar al-Kiswah, it was established in 1817 during the Ottoman era. It produced the kiswah until 1961, when Saudi Arabia took over the production.

Raafat al-Nabarawy, a numismatics and Islamic antiquities professor and the former dean of the faculty of antiquities, said the Dar al-Kiswah building attracted significant attention from rulers and kings, from Ottoman sultans to former Egyptian President Gamal Abdel Nasser. Nabarawy holds the entire government responsible for the building’s current state of neglect, as no efforts are being put into preserving Egypt’s Islamic heritage.

Nabarawy said that it was necessary to know which ministries should be entrusted with renovating and securing Dar al-Kiswah, given the confusion between the ministries of endowments and antiquities. Nabarawy also warned of thefts or a potential fire that could wipe out the history of this ancient building, stressing that the Ministry of Antiquities is the one responsible for preserving heritage buildings.

Nabarawy welcomed the idea of turning Dar al-Kiswah into a museum, as suggested by some residents of al-Khoronfesh street. He said, “This is a cultural heritage building of historical and spiritual value. Turning it into a museum would help to record the history of the kiswah tradition in Egypt, which began in Umar ibn al-Khattab’s era and continued throughout the Fatimid and Abbasid eras, not to mention the conflicts arising between the Mamluk Sultanate and others to earn the privilege of producing the kiswah. Furthermore, the museum could exhibit pieces of the old kiswah and document stories about embroiderers who were part of this ancient tradition.”

In turn, Othman Mohammad, the head of the media department at the Egyptian Ministry of Endowments, pointed out that Egypt stopped producing the Kaaba’s kiswah decades ago and therefore work at Dar al-Kiswah has stopped ever since.

As for renovating this building given its historical value, he said, “The Ministry of Endowments is entrusted with the Islamic Dawah. The Ministry of Antiquities is the one to determine whether or not the building is part of the Egyptian heritage. If the Antiquities Ministry judged Dar al-Kiswah as heritage, then it is its duty to renovate it.”