Why Egypt banned its police from talking to the media 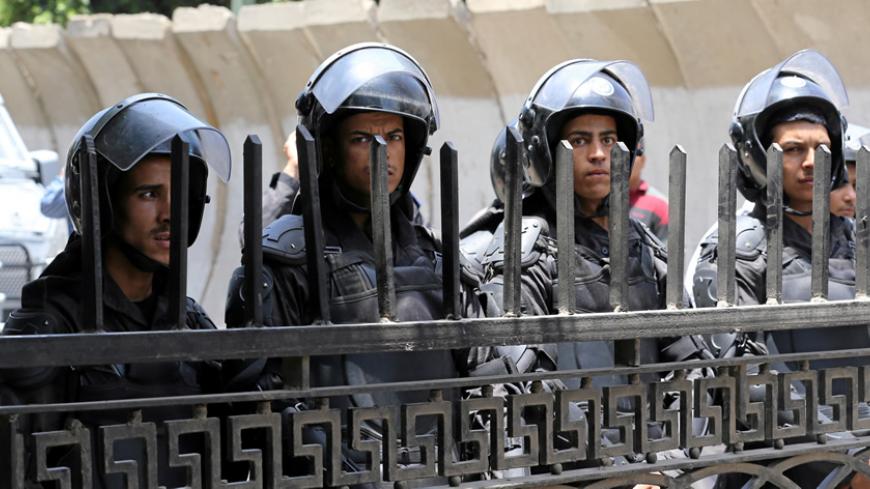 Riot police stand in front of the parliament as high school students take part in a protest against the cancellation and postponement of exams after a series of exam leaks, in Cairo, June 27, 2016. - REUTERS/Mohamed Abd El Ghany

In a move that critics say will “further undermine transparency,” Egypt’s parliament on Aug. 9 approved amendments to the police authority law that bar police officers — including those who are retired — from providing information to the media without prior authorization from the Interior Ministry.

The new restrictions require that police officers seek approval from the interior minister before publishing any documents, reports or photographs related to their work and are seen by some observers as “yet another attempt by the authorities to hide truths under a shroud of secrecy.”

“Strictly curating information from the state will exacerbate existing doubts about the integrity of the government,” Timothy Kaldas, a nonresident fellow at the Tahrir Institute for Middle East Policy, was quoted as telling Al Jazeera on Aug. 9.

Police officers who violate the law could face unspecified prison terms and fines of up to 20,000 Egyptian pounds (roughly $2,250).

Police have traditionally been an important source for journalists covering criminal and terrorist activities. The amendments, however, mean that journalists reporting on security issues may now be kept in the dark.

“The amendments are tantamount to imposing a news blackout on all security issues,” Rasha El-Ibiary, an assistant professor of political mass media at Future University in Cairo, told Al-Monitor.

A security source, who asked not to be named because he was not authorized to speak to the press, defended the new legislation. He told Al-Monitor, “It is important that journalists speak to one informed source only, to avoid getting contradictory statements that could cause confusion.”

This, however, defies the principles of a free press that encourage journalists to seek information from a variety of sources. It is also reminiscent of the restrictive anti-terrorism law issued by President Abdel Fattah al-Sisi in mid-August 2015 prohibiting journalists from acquiring information from any source other than the military authorities on all terrorism-related issues.

Media gags are not rare in Egypt, where the space for free expression has dramatically diminished since the military takeover of the country in July 2013. The prosecutor general has in recent months prohibited the media from reporting on several public interest issues, including the investigation into the brutal murder of Italian researcher Giulio Regeni, whose badly mutilated corpse was found on the side of a road in the Cairo suburb of 6th of October City in early February, 10 days after he had mysteriously disappeared on Jan. 25 — the date marking the fifth anniversary of the 2011 revolution. Regime opponents and outside observers have said his death bears the hallmarks of a state-sponsored killing.

A Reuters article published April 21, meanwhile, said that three intelligence officials and three police sources had independently confirmed to the news agency that police had the slain Italian doctoral student in custody at some point before he died. Not surprisingly, Reuters protected the identity of the sources for fear of repercussions against them. Last year, the prosecutor general also imposed a media gag on the investigation of a police officer charged with the fatal shooting of leftist activist Shaimaa el-Sabbagh. The 31-year-old mother was killed on Jan. 24, 2015, while participating in a peaceful protest near Tahrir Square that had been staged to commemorate the martyrs of the 2011 revolution.

Well over 40,000 political prisoners languish behind bars as part of a harsh security crackdown on dissent since the ouster of democratically elected Islamist President Mohammed Morsi in July 2013. In 2015 alone, more than 1,250 forced disappearances and 267 alleged extrajudicial killings were recorded by local rights groups. Police brutality, one of the factors that sparked the 2011 mass uprising, appears to have returned with a vengeance with a series of police assaults on citizens in the past year alone resulting in at least eight fatalities. The recurring police assaults on citizens have provoked a heated debate in parliament, with some liberal lawmakers calling on the interior minister to resign and other pro-government parliamentarians arguing that calls for police reforms were merely attempts to undermine the state.

In a bid to appease public anger over police excesses, Sisi in February pledged new laws that would allow harsher penalties for police officers guilty of rights abuses. He firmly told Interior Minister Magdy Abdel Ghaffar that “the violations must stop.” His remarks came after angry protests sparked by the fatal shooting of a van driver by a low-ranking policeman during a dispute over the fare. The death of the driver prompted crowds of protesters to take to the streets chanting anti-police slogans in defiance of a law banning protests without authorization from the Interior Ministry. In another incident of police brutality less than three weeks later, a tea vendor was shot to death by a policeman in the Cairo suburb of al-Rehab during a dispute over the price of the tea. Instead of cracking down on members of security forces responsible for the abuses as Sisi has urged, the new law will likely keep the rights violations hidden from the public eye. It may also further widen the gap between police and journalists, as it will reduce the chances of communication between them.

Tensions have simmered between journalists and the police since April, after members of security forces harassed reporters covering protests denouncing the Egyptian government’s decision to transfer two Red Sea Islands to Saudi Arabia. Several journalists covering the protests that took place April 15 and April 23 were arrested and briefly detained; several others were reportedly molested by security forces. The standoff reached its peak when police raided the Press Syndicate headquarters in early May to arrest two journalists critical of the government who had sought refuge inside the building. The labor union called the raid “an unprecedented crackdown on the media.” Yehia Qalash, the head of Egypt’s Press Syndicate, and two syndicate board members were arrested at the end of May and are facing trial on charges of harboring journalists wanted by the authorities and publishing false news.

The amendments approved by parliament this week also demand that police officers show greater respect for human rights. Skeptics, however, doubt that the culture of police impunity will end anytime soon.

Hossam Menai, a documentary filmmaker who has experienced police abuse firsthand — including daily beatings and insults by a low-ranking officer during his short spell in prison in January 2014 on the charge of spreading false news that threatens national security — told Al-Monitor that the law can only weaken police accountability.

“It helps protect the abuser rather than the abused and may make it even more difficult to expose those who have committed rights violations,” Menai said.