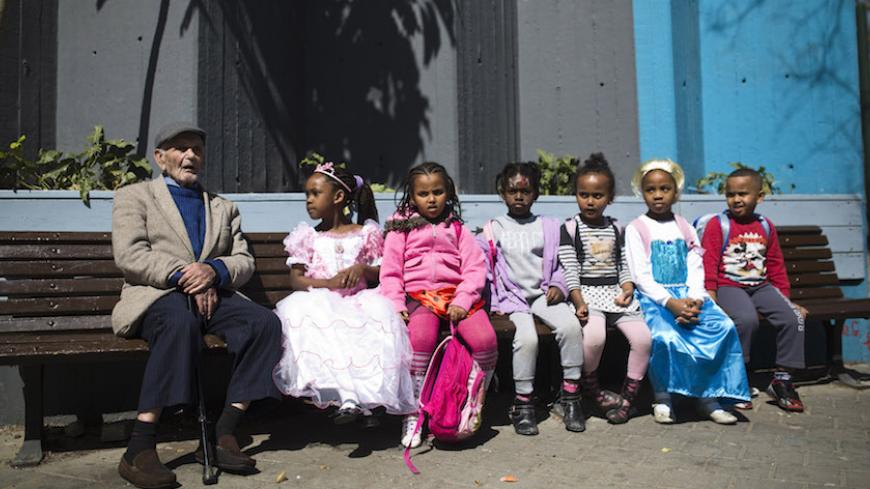 Students wearing costumes sit on a bench next to an elderly man outside the Bialik Rogozin school in Tel Aviv on March 3, 2015, during a parade for the March 4-5 Jewish holiday of Purim. At Bialik Rogozin, children of migrant workers and refugees are educated alongside native Israelis. - REUTERS/Amir Cohen

Israeli Defense Minister Avigdor Liberman is one of the busiest people in the world. Just two weeks ago, on Aug. 5, his office announced that Iran was still plotting to annihilate Israel. He is probably also busy preparing plans to make good on his promise from April to end Hamas' rule in Gaza within 48 hours, should he become defense minister (he became defense minister in May). Liberman is a man of his word. His desk is also literally covered with permit requests for new construction in West Bank settlements. While juggling all the above, the defense minister still took time out to deal with a handful of soldiers who had volunteered to play with the babies of status-less asylum seekers, ordering the Israel Defense Forces (IDF) chief of staff, Lt. Gen. Gadi Eizenkot, to put an end to this outrage.

There are those who, like Liberman's predecessor, Moshe Ya’alon, interpreted Liberman’s behavior as an attempt to “showcase his 'leadership skills' over the IDF chief of staff.” Liberman may well have found an opportunity to seat Eizenkot on a humiliatingly low chair, just as Danny Ayalon, Liberman’s one-time deputy when the latter served as foreign minister, did in 2010 to the Turkish ambassador, whom he had summoned for a reprimand. There is, however, another, far deeper and more disturbing explanation for kicking the volunteering soldiers out of the facilities dubbed “children’s warehouses” or “babysitters,” where asylum seekers leave their kids when they go to work. The explanation lies in an announcement by the defense minister’s office, according to which, “If soldiers have free time, let them help Holocaust survivors or the needy. ‘The paupers of your city have priority.’” The reference to paupers alludes to Talmud Baba Metsia 71, meaning that charity for one's poor neighbors precedes charity for family in a distant city.

These words epitomize the xenophobia, separatism, racism and cruelty that are eating away at every value that Israel once held sacred. These toxic waters are trickling down from the top to the very roots of society, overflowing and flooding the environment. They began with Knesset member Miri Regev, the current culture minister, calling asylum seekers a “cancer” in Israel’s body in 2012, and then moved on to the group calling itself Students for Southern Tel Aviv, which a year ago “ratted out” soldiers who volunteered at daycare centers for the children of asylum seekers. At the time, the army spokesman issued a response to the right-wing Jewish Voice website that ran the item, stating that the activity was part of the army’s encouragement of soldiers to contribute to their communities, that it was apolitical and that it was approved, as usual, by the commanders and education officers of their unit. Of note, IDF soldiers also assist Holocaust survivors, children with disabilities and charitable organizations that distribute food to the poor.

Indeed, in an enlightened society, the state bears responsibility for those less fortunate — the state, not soldiers and other volunteers, such as the nongovernmental organization Elifelet, which takes care of children of asylum seekers. The asylum seekers, who numbered 57,000 in 2012, cannot be deported because of the danger that would await them in their homeland. There is no doubt that they are needy, among other reasons because of draconian Israeli laws and regulations, and that they reside in Tel Aviv. Given this, why are they not worthy of consideration as “paupers” who have priority? After all, the Talmud's maxim does not refer to “Jewish paupers.”

Former Chief Justice Dorit Beinisch wrote in a February 2009 ruling on family reunification, “The same sweeping generalization … according to which, by virtue of its sovereignty, the state bears no obligation of any kind toward a person because he is a foreigner, is no longer acceptable.” She emphasized, “In the current era, there is growing awareness that human beings have rights by virtue of being human, and many states, in discussing limitations on immigration, deal with problems stemming from the rights of those who enter its doors.”

If the rights of human beings must not be violated by virtue of their being human, the same applies to an even greater extent to the rights of babies. The UN Convention on the Rights of the Child obliges its signatories, among them Israel, to respect and ensure the rights of “each child within their jurisdiction without discrimination of any kind, irrespective of the child’s or his or her parent’s or legal guardian’s race, color, sex, language, religion, political or other opinion, national, ethnic or social origin, property, disability, birth or other status.” The text of the convention appears in its entirety on the web site of Israel’s Education Ministry.

Treaties are one thing, however, and treatment quite another. The state comptroller looked into the matter and found that in regard to the children of asylum seekers, there is almost no article of the convention that Israel does not violate. In a 2013 report, the comptroller wrote that these minors spend their days in some 50 so-called babysitting facilities in conditions of overcrowding, neglect and negligence. He warned that stays at these places constitute a real risk to the development of toddlers and children to the point of endangering their lives.

In 2015, five babies died in these makeshift kindergartens, some of which had 80 children stuffed into an area no bigger than 50 square meters (538 square feet), with one adult in charge of about 30 children. Compare that with the official Israeli standard of one adult for every five babies aged 3-15 months in groups not to exceed 15 children and one adult for every seven toddlers aged 16-24 months in groups limited to 21 kids. On Aug. 17, a 1-year-old baby of an asylum seeker was taken to a hospital in serious condition. The caretaker in a babysitting facility in Tel Aviv reportedly had not noticed that the child was distressed and suffocating.

The comptroller concluded his report with a demand that government ministries ensure the rights of minors who are devoid of status in accordance with the UN Convention of the Rights of the Child and as befits Israel’s fundamental values as a Jewish and democratic state. It turns out that in contemporary Israel, however, being Jewish means hating non-Jews, and democracy means populism. Throwing Africans into poor Tel Aviv neighborhoods and turning local residents against the “infiltrators” — as illegal immigrants are when translated from the Hebrew — is far more worthwhile than dispersing asylum seekers around the country and enabling them to find work and establish a roof over their heads. They are not members of the ruling Likud, they have not registered at the neighborhood branch of Liberman’s Yisrael Beitenu, and the name “Liberman” may not even mean anything to them.

So, kindhearted soldiers were forced to abandon the toddlers they took out of the darkness of the children's warehouses into the sunlight. It is a missed opportunity to substitute a photo of an Israeli soldier hugging a non-Israeli baby for the one that filled the pages of foreign media showing the IDF soldier who shot and killed a wounded Palestinian assailant in Hebron in March or of a politician comfortably ensconced in the Defense Ministry flexing his muscles at the chief of staff on the backs of miserable babies. All that really matters is that the Ministry of Strategic Affairs has appointed a special team to battle, so explained the ministry's general director Sima Vaknin, Israel's image as a “pariah state.”