Turkey did not fail its test of democracy on July 15, but what about the inevitable aftershocks? 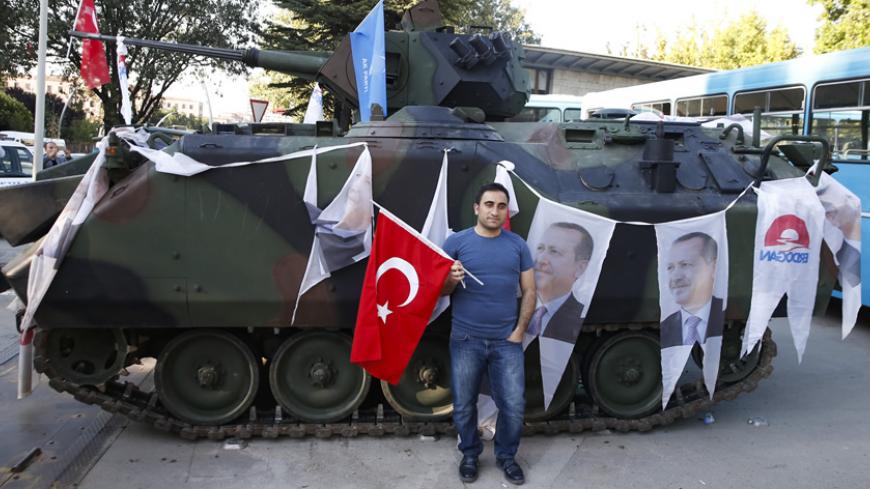 A man stands in front of an armored vehicle with portraits of Turkish President Recep Tayyip Erdogan parked outside the parliament building in Ankara, July 16, 2016. - REUTERS/Baz Ratner

On the night of July 15, Turkey passed a major democracy test that included a coup attempt, an uprising and the worst terror ever against its citizens. Thousands of Turkish citizens who took to the streets that night — despite the warnings of the coup plotters to stay indoors and obey the curfew — gave the clearest message: Those who came with elections, will leave with elections.

The coup attempt saw the use of tanks, heavy armor, and assault helicopters and warplanes, mostly in Ankara and Istanbul; 161 people were killed, 1,440 wounded and 2,839 soldiers of various ranks, mostly conscript privates, were detained. In addition, 104 coup forces were killed.

On the morning of July 17, as this article was penned, clashes had ended but detentions were continuing. The last bastions of the coup at the Chief of Staff headquarters in Ankara and at Akincilar air base, which is 20 kilometers (roughly 12 miles) from Ankara, were recovered and life was quickly returning to normal.

The first indications that something was happening on the night of July 15 around 10 p.m. local time was when the media began reporting the closure by soldiers and tanks of two bridges in Istanbul that link Asia to Europe. Turkish air space was declared closed and military planes were in the sky. Like everyone else, I first thought that Turkey was experiencing another plane hijacking. But soon reports of clashes at the bridges and strategic points in Ankara and Istanbul indicated that this was something very different. What it was became clearer when Prime Minister Binali Yildirim appeared on major TV networks around 11 p.m. He said it was a coup attempt by a faction of the military in an attempt to take over the political rule of the country. Later, President Recep Tayyip Erdogan said on live TV that the Fethullah Terror Organization (FETO) led by the US-based cleric Fethullah Gulen was behind the coup attempt, and called on the people to take to the streets to save democracy. Civilians responded bravely and came out and marched to the areas where the clashes were taking place, especially in Istanbul and Ankara. As time passed, a more dangerous situation developed. For the first time in its history, Turkey witnessed the bombing of its parliament by F-16s. A Turkish F-16 shot down a Turkish Sikorsky helicopter, and officers in a Black Hawk helicopter sought asylum in Greece.

Chief of General Staff Gen. Hulusi Akar was informed about the coup attempt around 5 p.m. but did not want to leave his headquarters. Akar and Deputy Chief of Staff Gen. Yasar Guler were seized and then taken into custody by the junta, who locked them up at the Akincilar air base near Ankara. Similarly, Commander of the Land Forces Gen. Salih Zeki Colak, Gendarmerie Commander Gen. Galip Mendi, Commander of the Air Force Abidin Unal and Commander of the Turkish Naval Forces Bulent Bostanoglu were taken into custody by the plotters. A coup declaration on the official internet site of the High Command around 3 a.m. and a communique aired by TRT state TV announced that the military had taken over the rule of the country under its chain of command. Eventually, the street clashes eased and small military groups were arrested by the police. Life began turning back to normal around noon on July 16.

Though the final answer to this crucial question will be known after the legal investigations have taken place, I believe that the clique behind this coup consists of FETO-affiliated officers and a group of officers some of who want to save their military careers and personal interests and some of who are truly dedicated to secular values and who were opposed to Erdogan. Whether Gulen was behind it all will be determined in time, but no doubt he was a source of inspiration. There are serious allegations that Lt. Gen. Metin Iyidil, the head of the Land Forces Training and Doctrine Command in Ankara, and former Legal Counsel of the Chief of General Staff Col. Muharrem Kose, who was removed from his post in May 2016 on accusations of FETO membership, played key roles in the uprising.

The highest-ranking generals who were detained in this coup attempt, which was not backed by Akar and other branch commanders, are Gen. Akin Ozturk, who until last year was the commander of the air force; Gen. Adem Huduti, commander of the second army responsible for combating terror in the southeast; and Lt. Gen. Erdal Ozturk, the commander of the third army corps in Istanbul. In addition, another four-star general, the commander of the third army, was also detained. Roughly one-third of the 220 brigadier generals in the Turkish Armed Forces (TSK) and about 10 major generals were detained. These numbers indicate that although they did not have the support of the Chief of General Staff and other key commanders, the plotters had significant support in the ranks of brigadiers and colonels. Large number of majors and lieutenant colonels were also taken into custody.

Among the clique, air force personnel that constitute 8% of the TSK and the gendarmerie that constitute 15% of TSK particularly play an important role. What was missing from the coup forces was adequate participation from the land forces, which make up 65% of the TSK.

According to some reports, if the coup had succeeded, Ozturk, the former air force commander who currently does not occupy a post, was to be appointed as the Chief of General Staff.

Why did the coup attempt fail?

The following developments on the night of July 15 caused the coup attempt to fail:

What else may have prompted the coup attempt?

The plotters did not have a proper chain of command and could not coordinate their actions; they did not have an operations center. The junta that appeared to be focused on Ankara and Istanbul could not exploit the element of surprise it had achieved between 10 p.m. and midnight, which gave the impression the coup attempt was a hastily hatched kamikaze effort.

The indictment July 14 against the Gulenists within the TSK, as part of the Izmir espionage case, facilitated the coup attempt.

According to reliable sources who spoke to Al-Monitor on condition of anonymity, had there not been a coup attempt July 15 there would have been massive detentions on July 16-17, prompted by the espionage case. These sources claim that the prosecutor of the espionage case in Izmir had already secured Erdogan's approval to order mass arrests before the approaching Supreme Military Council meeting on Aug. 1-4, which would have decided on the next round of promotions and appointments within the TSK. The plotters learned of this plan and launched their sloppy and uncoordinated attempt hastily. In other words, the coup attempt that was planned for a future date was moved up.

What if it had succeeded?

If it had succeeded, the TSK would have split. The shooting down of a Sikorsky helicopter by an F-16 supporting the government was a signal. Moreover, the coup forces did not have any other option than opening fire to suppress the civilians on the streets in response to the government's call. If the coup had succeeded, Turkey could have found itself in a bloody civil war.

The inevitable political uncertainty and instability that would have followed the success of a coup would have had earthquake effects on Turkey’s struggle against the Kurdistan Workers Party (PKK) and the Islamic State, and on its foreign relations in general.

Why did the National Intelligence Organization and the General Staff not know about the junta? The existence of the Gulenist structure within the TSK has been known for a long time, including the identities of its key members. While the government was probably planning to launch a massive purge against the Gulenists in the TSK during the Supreme Military Council meeting, providing a sense of comfort to commanders and the government, Ankara obviously did not believe that a junta would undertake such madness. The command level did not expect such a widespread and uncoordinated uprising that included most of the combat brigade commanders.

Was it democracy or Erdogan that was the winner on July 15? We will find out when the steps Erdogan plans to take are revealed.

The course of combat against the PKK may change. The only key question asked by pro-Kurdish social media accounts on the night of July 15 was whether the situation would affect their imprisoned leader, Abdullah Ocalan.

We must take note finally of the phenomenal trauma the TSK is experiencing now. Traditionally, the TSK has been an institution emulating Western modernization with a pro-West and robust secular outlook. Could the current situation cause an identity crisis in the TSK? Can the TSK’s secular character be diluted and make the Turkish military more sensitive to religion? And can purges expected after the coup attempt turn the TSK more toward Eurasia and push it toward a more nonaligned and anti-Western orientation?