Profile of a dedicated Gulenist in Turkey's army

As details of the July 15 coup attempt emerge, a clearer picture is forming of the massive and strategic infiltration of the Turkish military by officers affiliated with the Fethullah Gulen movement. 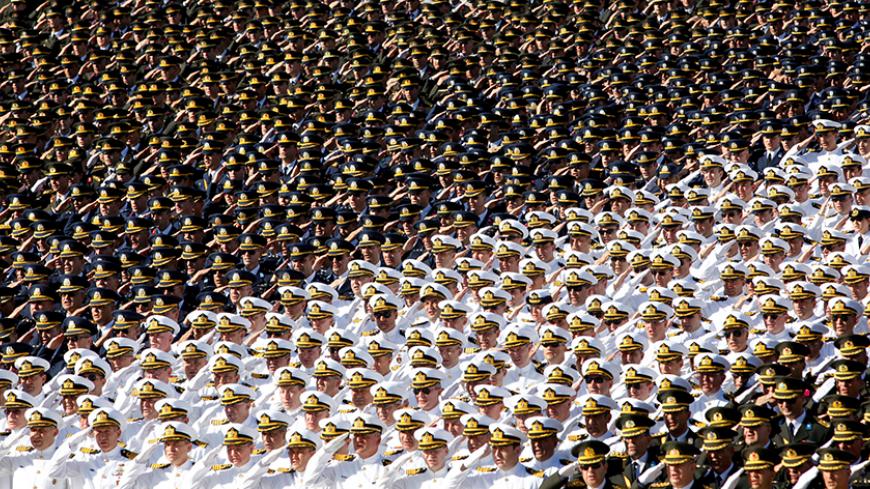 Turkish soldiers salute during a ceremony marking the 87th anniversary of Victory Day at the mausoleum of Mustafa Kemal Ataturk, founder of modern Turkey, in Ankara, Turkey, Aug. 30, 2009. - REUTERS/Umit Bektas

Mind-boggling details gradually unearthed about the July 15 failed coup attempt show how close Turkey came to the edge of the abyss that night.

When one scrutinizes the WhatsApp messages and lists of coup plotters who would have been appointed to critical posts of the country, it's beyond doubt that the attempt was the brainchild of members of the Fethullah Gulen movement, known in Turkey as the Fethullah Gulen Terrorist Organization (FETO).

The violent coup attempt sought to take over civilian rule, launch attacks and assassinate politicians. The strategic brains behind this scheme were the FETO members at the command floor of the chief of staff headquarters on the night of July 15. Who are these FETO loyalists? How were they recruited and indoctrinated? How could they, without hesitation, give up their families and bright futures in the Turkish Armed Forces (TSK)? How did they manage to keep their posts without attracting suspicion?

A profile of alleged coup plotter Lt. Col. Levent Turkkan provides answers to these questions. Turkkan first put on a uniform as a military high-school cadet in 1989, when he was but 14 years old. He joined the army as a lieutenant in 1997 and wore his officer uniform for 19 years.

Between 2011 and 2015, Turkkan was junior aide-de-camp (ADC) to then-Chief of General Staff Necdet Ozel. In August 2015, when Gen. Hulusi Akar took over as head of the TSK, Turkkan was appointed as his senior ADC. Those who are familiar with military life know well that an ADC is the officer closest to the superior commander. An ADC knows everything that goes on, arranges all meetings and the daily schedule of the commander. He sees and processes all the incoming information and documents. He transmits verbal and written orders from his superior to others. In rigid armies like the TSK that pay close attention to internal hierarchy and discipline, whatever the ADC says is treated as his commander's word.

But what if the heart and mind of that ADC belong to another commander? This is why the first testimony of Turkkan to the public prosecutor came as a shock.

In his testimony, Turkkan said his first contact with FETO was in 1989 when his "older brothers" — FETO members who befriended him — prodded him to become an officer. Turkkan said he was supplied in advance with questions of the entrance examination for military high school.

"In military high school I stayed in touch with older brothers Serdar and Musa. We were meeting once a month to pray and chat. We read Fethullah Gulen's books. My brothers even taught to me how to perform ablution before prayers without being detected, which could have given away my affiliation," he said.

His contacts with FETO continued every two to three weeks, but when he was at the Military Academy in Ankara, these meetings were disrupted for seven or eight months, he said, because he had a girlfriend in the freshman class.

Turkkan said he was not directed toward any political ideology and he usually voted for the Justice and Development Party. "When I was in military schools, they didn't assign me any duties. We were told that our only mission was not to be identified," he added.

When Turkkan was commissioned as an infantry lieutenant in 1997, his academic performance was not outstanding, but he was recognized as a serious and disciplined officer. Until 2010, he wasn't given any important tasks by FETO and thus avoided attracting attention. His military career started to move after he was assigned to the Support Units Command of the chief of staff headquarters. Turkkan said his outstanding performance attracted notice when in 2010-2011 he was the officer running the military canteen attached to the Support Units Command. It was then he was nominated as Ozel's junior ADC. His FETO brothers began tasking him after 2011. It is not yet clear if FETO had a role in his assignment as the junior ADC to the No. 1 position at the TSK.

"I became a full-fledged ADC during the last three months of the term of Gen. Ozel. I was regularly recording his conversations. An 'older brother' whose name I can't remember gave me the bugs and told me to record everything Gen. Ozel said. I did that every day and passed on the recordings to an 'older brother.'"

Turkkan said in his testimony that while he was serving as an aide to Ozel and Akar, and then to Gen. Yasar Guler (the current deputy chief of general staff), "My friend Maj. Mehmet Akkurt served as their ADC. Akkurt is also a member of the Gulen movement. We did the recordings together."

Turkkan said there is absolute secrecy in the movement. Everyone only knew his "older brother," did his own work and carried out tasks, but didn't know anything more and didn't ask. What was interesting to note was his absolute loyalty to Gulenists whose names he didn't even know, simply calling them "older brothers."

Of course it wasn't a surprise when FETO's demands on Turkkan increased sharply after he was appointed Akar's senior ADC. Turkkan said he carried out tasks without questioning them, such as recording conversations of commanders and obtaining personal details of generals. He even was ordered to detain and mistreat his own commander during the coup. He told the prosecutor that FETO attached importance to compartmentalization and maintaining its cell structure within the TSK. FETO-affiliated officers did not know each other.

Turkkan, like senior Islamic State militants, did not hesitate to modify his behavior to avoid detection. He drank alcohol and did not fast during the holy month of Ramadan, to show he was not religious.

On July 15, Turkey learned through bitter experience what a revolutionary, radical religious movement with a charismatic leader can produce. Only now are we learning how skilled this movement was in concealing its infiltration of the TSK and the extent of its influence on officers of all ranks.

The country saw how a good officer, a good father and a good husband could shirk all those responsibilities to carry out the orders of the Gulen movement. Until now we all thought this only happened in movies. Now we know.