Planning for the 'day after' Mosul

As preparations advance to retake Mosul from IS, defense and foreign ministers from some 30 nations met in Washington to plan how to provide humanitarian relief and services for hundreds of thousands of people expected to be displaced. 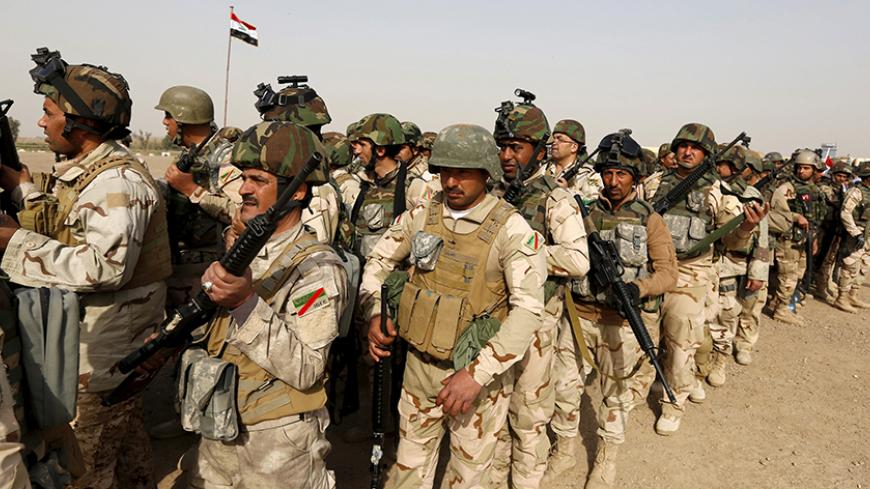 Iraqi security forces wait for vehicles traveling to Mosul to fight against Islamic State militants at an Iraqi army base in Camp Taji in Baghdad, Feb. 21, 2016. - REUTERS/Ahmed Saad/File Photo

WASHINGTON — With plans advancing for the battle to retake Iraq’s second-largest city, Mosul, from the so-called Islamic State (IS), the military campaign to seize territory is making such rapid progress in Iraq and Syria that it now presents a daunting challenge: how to get humanitarian and political preparations to catch up. Defense and foreign ministers from over 30 nations met in Washington July 20-21 to plan how to provide humanitarian relief, reconstruction and government services to care for and try to win hearts and minds of the millions of people expected to be displaced or severely impacted in the operations, most of them Sunnis, so that IS — once uprooted — does not find fertile ground again.

“The liberation of Mosul is now in sight,” Brett McGurk, the US special presidential envoy to the Global Coalition to Counter ISIL (IS), said at a meeting of 30 coalition defense and foreign ministers at the State Department July 21. “We must, as a coalition, get it right.”

“The political and diplomatic aspects of this fight must keep pace with the battlefield progress,” McGurk said. “If we can’t sustain the victories by holding cities after their liberation, our success may not be lasting.”

US, UN, European and Arab diplomats said that military victory to uproot IS will not be enduring without making sure humanitarian relief and government services are provided to care for the displaced. Recent military gains in Fallujah, Iraq, and Manbij, Syria, have been followed by grim reports and photographs of desperate displaced civilians with minimal humanitarian aid support or shelter.

“Every victory on the battlefield creates another humanitarian crisis,” Lise Grande, the UN humanitarian coordinator for Iraq, told an Iraq pledging conference held at the State Department in Washington July 20.

Some 660,000 people are expected to flee their homes and as many as 1.5 million people will be severely affected in the operation to retake Mosul, Grande said, describing it as the biggest humanitarian challenge Iraq has faced. Of the over 3 million people already displaced in Iraq, 90% of them are Sunnis, Grande said.

“Much territory has been liberated faster than we imagined,” US Secretary of State John Kerry said at the Iraq donors conference June 20. “But it is important to come in underneath the military liberation with the type of support for rebuilding, for health, for education, to be able to make sure that we’re not leaving the door open for a disgruntlement or the revisiting of [IS] that undoes the liberation itself.”

“When we win this fight — and let there be no doubt that we will — there will still be much more to be done,” US Secretary of Defense Ashton Carter told the gathering of over 30 counter-IS coalition defense and foreign ministers at the State Department July 21. “There will be towns to rebuild, services to reestablish, and [we] must ensure that when that time comes, the Iraqi and Syrian people have what they need to hold, stabilize and govern their territory.”

“For that reason, we cannot … allow the coalition’s stabilization and governance efforts to lag behind our military progress,” Carter said.

Iraq’s Foreign Minister Ibrahim al-Jaafari, for his part, expressed gratitude for the $2.1 billion pledged for Iraq stabilization at the July 20 donors conference and confidence in the campaign.

“The victories that Iraq has been achieving so far is the result of the efforts that the international coalition has been in support of Iraq,” Jaafari said in remarks with Kerry at the State Department July 21. “There is a lot more coming that needs to be done to defeat terrorism and [IS], not only in Iraq but wherever it exists in the world.”

Indeed, progress in the military campaign against IS has moved so much more quickly than expected that a debate has opened up inside the international coalition and humanitarian community on whether they should slow down to let the political and humanitarian preparations catch up, Western officials suggested.

“On the military side, things are moving forward much faster than we thought,” French Defense Minister Jean-Yves Le Drian, speaking through a translator, told a small group of journalists in Washington July 21. “Now we are preparing for [supporting the battle to retake] Mosul. I am not saying it is going to fall right away, but we are moving in the right direction.”

“In contrast, the political conditions are still in the making,” Le Drian said. “The Iraqi government … is still fragile and has lots of internal problems. We have to settle the question of what will happen in Mosul after. How can we organize the post-IS period in Mosul without creating new disorder?”

“We think the political activities should accelerate so they can keep pace with the military actions on the ground,” Le Drian continued.

On the question of whether retaking the IS-strongholds of Mosul or Raqqa was a greater priority, the French defense minister said both.

“We have to take both,” Le Drian said. “The incubator [for IS] is in both Mosul and Raqqa. People are traveling between the two.” The military side of the campaign to uproot IS from Iraq and Syria may take another year to a year and a half, he estimated.

The question of postwar governance and social cohesion remains challenging, with Iraq Prime Minister Haider al-Abadi’s government still facing deep internal strains and Sunni mistrust, no reconciliation between factions in Syria’s 5-year-old civil war and little sign of progress in Syrian political talks in Geneva, which were suspended in April.

If reported US-Russian agreement on a plan to fight Jabhat al-Nusra and restrict Syrian air force operations “makes it possible to have a cease-fire over Aleppo, this would be a good thing so political talks in Geneva can be resumed,” Le Drian said.

“Politically, I do not believe it is wise to wait for [Geneva] discussion to take place to continue the fight against IS,” he added.