Palestinians in the Bethlehem area are protesting both the Israeli decrease in the available water supply and the Palestinian water authorities’ alleged lack of fairness in the distribution of existing water supplies. 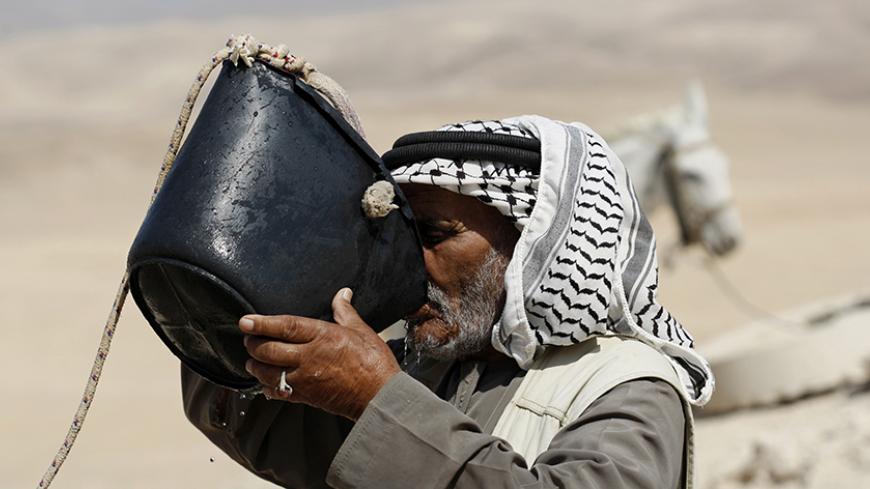 A Bedouin shepherd drinks water drawn from a rainwater collection cistern in the Rashayida area, in the desert between the West Bank town of Bethlehem and the Dead Sea, July 25, 2011. - REUTERS/Mohamad Torokman

“We haven’t had water for nearly 40 days,” a caller to the Voice of Palestine radio station told the presenter of the show July 8. The caller lives in the picturesque village of Artas, southwest of Bethlehem, which is known for its fertile land and imposing monastery. Residents of the village are the latest victims of this summer’s extreme water shortage that has hit many parts of Palestine, but especially the Bethlehem governorate.

Not far from Artas, in the village of al-Khader, residents have taken to the streets to protest the water shortage. “We have decided to go out into the streets and protest,” Ahmad Salah, a Palestinian who spent years in an Israeli jail, told Al-Monitor.

Calling himself a social activist, Salah said that the protest that began July 9 was completely spontaneous. “We don’t belong to any political party; we are Palestinians who simply want the water problem to be solved,” he said. The videos that Salah posted on his Facebook page show young people in the center of the town chanting “Bidna may” ("We want water").

Salah said that the governor of Bethlehem agreed to meet with the protesters and promised them that water would reach the village by July 11. At exactly 6 p.m. that evening, once it became clear that al-Khader was still without running water, the youth were out protesting once more.

IT expert Jiryes Sadi told Al-Monitor that his home in Bethlehem gets water once every month. He said, “Once it reaches us, the pressure is not very strong because everyone is trying to fill their tanks.”

Sadi said that his family has to buy at least one water tank a month for 300 Israeli shekels ($77). “The problem is not only the cost of the water, but also the danger of climbing to the roof to place the water in the tank.”

The shortage of water in Palestine is nothing new, but so far this summer the shortage has been much more acute than usual. The local water companies have been forced to cut the water supplies because the Israeli water companies have not supplied what they agreed to. On the first day of Ramadan, many Palestinian communities were cut off from the water supply network without prior notice.

Israeli journalist Amira Hass reported July 9 in the Israeli daily Haaretz that Israeli politicians had restricted the required increase in water supplies to Palestinians as well as Israeli settlers — even though the latter have access to much more water than their Palestinian neighbors. Hass quoted an Israeli Knesset member publicly calling for a priority in access to water to Israelis. She wrote, “Knesset member Bezalel Smotrich said that if everyone is suffering from water shortages, Israelis’ needs should be met first."

The Oslo Accord stipulates that Palestinians are only allowed to use 20% of the natural water aquifers that they have physical access to, while Israel gets to keep the remaining 80% and sell water to the Palestinians based on restricted amounts decided by Israel.

In addition to the problem of the diminished water supply, some Palestinians blame Bethlehem's Water Supply and Sewage Authority of inequality in the distribution process of the water Israel has made available.

In this context, Salah said that people in his village blame the water company for his village’s demise. “Bethlehem, Beit Sahour, Beit Jala and the Dheisheh refugee camp get the lion’s share of water [available to Palestinians], and we are left with long delays,” he said.

The Water Supply and Sewage Authority denies this. In a statement published June 28 in the local press and online, the water authority explained that it has received from the Israelis so far this year “12,000 cubic meters compared to 15,700 during the same time last year.” The water authority insisted that water is “distributed fairly and based on a transparent and published schedule.”

Despite the denial, Bethlehem Gov. Jibrin al-Bakri issued a statement June 27 calling for a more equitable distribution of the water supply. Bakri’s statement followed a visit the same day by Palestinian Prime Minister Rami Hamdallah, where Hamdallah spoke about the “need for better management of the water supply.”

Water is a precious commodity, and its distribution is perhaps one of the most obvious signs of discrimination between Jewish settlers and the Palestinian population. The water supply agreement that was signed as part of the 1993 Oslo Accord was for a defined interim period that ended in 1999.

Seventeen years later, Palestinians have not been able to gain control over their own water resources or at least adjust this agreement based on population growth. Water distribution is one of the most hot-button issues and the most tangible proof of an apartheid policy in the Palestinian occupied territories. Leaving such an important issue unresolved, especially during the hot summer months, is sure to raise the political temperature even more than it already is.