US secretary of state says the terrorist attack in Nice “could just as well have come from [Jabhat al-] Nusra”; Erdogan refers to coup attempt as a "gift from God" to "cleanse" army. 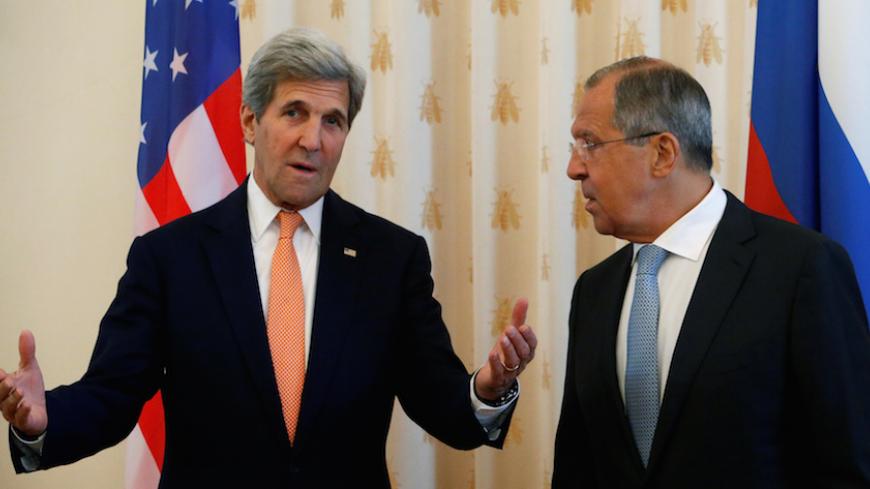 After meetings in Moscow with Russian President Vladimir Putin and Foreign Minister Sergey Lavrov, US Secretary of State John Kerry announced July 15 that the United States and Russia had made progress toward “concrete steps” to restore the fraying cessation of hostilities, collaborate in targeting Jabhat al-Nusra — al-Qaeda’s Syria affiliate — and boost talks on a political transition in Syria.

Kerry refused to lay out the details because they “need more work in order to work.” The United States has proposed a plan to set up a Joint Implementation Group with Russia to coordinate airstrikes in Syria in return for Moscow restraining the Syrian government’s air force against Syrian armed groups.

Laura Rozen reports, “The US proposal for deeper US-Russian coordination against Jabhat al-Nusra is controversial within the US administration, with some Pentagon, intelligence and State Department officials expressing doubt the Russians could be trusted to restrain the Syrian regime or not to use the intelligence to target US-backed rebels, given their track record of doing so in the past months.”

In a joint press conference with Lavrov, Kerry described critics of his initiative as “completely screwed up.” He reminded the "dissent" crowd that Jabhat al-Nusra, just like the Islamic State (IS), is designated as a terrorist organization under numerous UN Security Council resolutions. He said that “Nusra is plotting against countries in the world” and that “what happened in Nice last night could just as well have come from Nusra.” Kerry refused to characterize Jabhat al-Nusra as “opposition” and expressed confidence in the “non-terrorist organization opposition, the legitimate opposition, the opposition we have supported.”

Kerry noted that, in addition to the Syrian government, Jabhat al-Nusra and its allies have also violated the cessation of hostilities, as this column has reported — a fact often missing in press accounts. The secretary said opposition forces pairing up with Jabhat al-Nusra because of a shared commitment to fight President Bashar al-Assad’s forces “will not excuse it in our eyes. We saw what happened when people said the same thing about [IS] for a period of time — oh, don’t worry, they’re just a force against Assad, and down the road we can take them on. Well, they became more than just a force. And so I think that it is important for the United States, Russia, the entire coalition of ISSG [International Syria Support Group] to stand up against terrorism, and that is what we intend to continue to do.” Kerry made clear that the United States maintains that Syria can’t have peace while Assad is there,” and that Washington and Moscow disagree on this point.

Kerry’s initiative with Moscow offers the best bet to end the war and deal with an expansive global terrorist threat emanating from Syria. Last week, we noted two developments that reinforce the Obama administration's bold effort and strengthen Kerry’s rebuke of his critics — which we had labeled as "misguided" but we will go along with "completely screwed up" too: testimony by a State Department official that Jabhat al-Nusra is al-Qaeda’s largest affiliate ever, and Amnesty International’s report on the record of Jabhat al-Nusra and its allies in northern Syria, which is hardly distinguishable from the gruesome tactics of IS. To lump Jabhat al-Nusra with the Syrian opposition is not only wrong-headed, but it is an injustice and insult to the legitimate Syrian opposition and to those suffering under the horrific rule of these armed Salafi gangs. And Kerry is also right to remind that the murders of 84 people in Nice, for which IS claims credit, could have easily been committed by Jabhat al-Nusra.

Erdogan: Time to "cleanse our army"

Turkish President Recep Tayyip Erdogan referred to the failed military coup attempt as a "gift from God" and is casting a wide net in his determination to root out any and all suspected of treason.

On July 15-16, 104 alleged coup plotters and 161 civilians were killed in the attempted takeover of the Turkish government. The putschists bombed the Turkish parliament and other government buildings, and killed unarmed civilians who took to the streets to challenge the coup. The leaders of the coup reportedly include Gen. Erdal Ozturk, the commander of the third army at the time of the coup; Gen. Adem Huduti, the commander of the second army, which has responsibility for Turkey’s border security; and Gen. Ozhan Ozbakir, who commands forces in southwest Turkey.

Erdogan will also seek the extradition of Fethullah Gulen from the United States, declaring, “Once they hand over that head terrorist in Pennsylvania to us, everything will be clear.”

While there has been widespread disenchantment with Erdogan’s authoritarian and divisive policies, Turks of all political persuasions spurned the failed bid and those behind it. Opposition politicians, civil society leaders, and critical journalists and writers deplored the attempt to bring about change through the use of violent military force. The country is collectively mourning those citizens who lost their lives in confronting the perpetrators of the coup.

No doubt those implicated in the coup had a formidable network, but the president will no doubt see opportunity to settle scores with the widest range of opponents. So far, nearly 3,000 military officers have been arrested, with warrants for the arrest of nearly as many judges. Turkey’s next chapter will be marked by increased uncertainty about the direction of the Turkish state, which less than a decade ago was widely lauded as a model for governance in the region.

Mustafa Akyol wrote last week just days before the coup that “Turkey desperately needs reconciliation within itself” in order to steady its political course. That course, for now, will be a road not taken. Erdogan’s enemies have drawn blood, so revenge — not reconciliation — will carry the day.