One year out from their country's next presidential election, Iranians are wondering whether incumbent Hassan Rouhani will pay a price for striking a nuclear deal with the United States — and whether the US presidential battle will play a role. 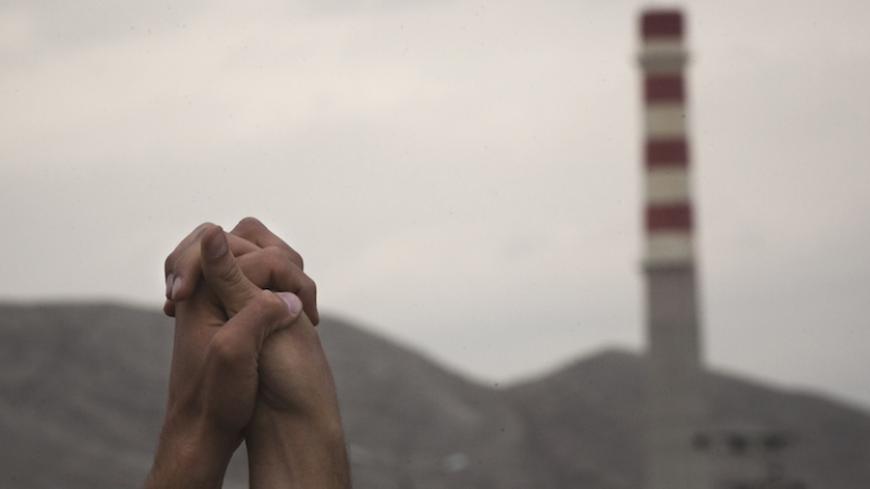 Iranian students hold up their hands as a sign of unity as they form a human chain around the Uranium Conversion Facility (UCF) to show their support for Iran's nuclear program in Esfahan, 450 kilometers (280 miles) south of Tehran, Nov. 15, 2011. - REUTERS/Morteza Nikoubazl

President Hassan Rouhani may very well end up facing his predecessor, Mahmoud Ahmadinejad, in next summer’s vote. Indeed, the conservative former president appears eager to return to the presidential residence on Tehran’s Pastor Street — and he’s fighting for it by using the outcome of the nuclear deal as a weapon.

“Rouhani might become the first [Iranian] president not to secure a second term,” a prominent Iranian moderate-conservative figure told Al-Monitor on condition of anonymity. “Many of those in my camp prefer that he gets a second term. Yet, the other candidate is exploiting the setbacks of the nuclear deal to present himself as the only savior to the people.”

The source added, “If the situation continues this way, the entire country will have to face a serious challenge that not many in the upper echelons will prefer seeing.”

On July 8, the US House of Representatives passed a bill that seeks to block US aircraft sales to Iran, potentially undercutting the Boeing deal with Tehran estimated to be worth as much as $25 billion. Prior to that, there were several other US measures that some thought vindicated the nuclear deal’s opponents in Tehran. The US Supreme Court ruling to seize $2 billion worth of Iranian assets to compensate American victims of the 1983 US Embassy bombing in Beirut was one; financial restrictions by the United States on companies doing business with Iran was another. Indeed, it is clear in Tehran that, given the current circumstances, the deal has produced very few things that benefit the masses of urban Iranians.

Al-Monitor asked a senior Iranian official whether there is something wrong with the deal and whether Iranians are still convinced it was the best path forward. He told Al-Monitor on condition of anonymity, “Iran has a wide spectrum of views. Many — maybe the majority — believe that Iran made the right decision but did not receive the full benefits that it was entitled to.” The senior official added that this was not because of any deficiency in the JCPOA, “but because of deceitful US behavior.” The official further said that if the United States continues with steps that could be seen as destructive, then “obviously Iran will not abide by a destroyed agreement.”

Yet, despite all the Iranian complaints, Tehran still views the JCPOA as “an opportunity more than an achievement,” according to Iranian diplomat Alireza Miryousefi, who was with the Iranian negotiating team in Vienna a year ago. Miryousefi told Al-Monitor that the deal was reached "with heavy expenses from both sides, and both should seize this unrepeatable opportunity.”

He added, “Missing this chance will be a big mistake.”

While the Rouhani administration might view the deal as having great potential, a group of young men in Tehran who are campaigning against the JCPOA regard it as a poison chalice. Alireza Mataji is the spokesperson for the hard-line Committee to Protect Iranian Interests, the main group within the coalition opposing the deal and the nuclear negotiations as a whole.

“The deal was clinched without Iran receiving any advantage, or even without the other party making any commitment to lift the sanctions,” Mataji told Al-Monitor while explaining why his group opposes the deal. “Instead, the deal destroyed Iran's nuclear industry, which was the symbol of the people's resistance, independence and self-esteem in the face of the West's bullying for years.”

He said, “The deal came at a time when it was getting more and more difficult and costly for the United States to keep its sanctions against Iran, and on the political side, it facilitates the United States' other plans to eradicate the Islamic Republic as its main ideological enemy in the world.”

Mataji added that, even though US Republicans have fiercely opposed the nuclear deal, he does not believe the next US administration will give up on the deal.

”I don’t imagine that the United States would turn its back on the JCPOA. … The difference between a [Hillary] Clinton administration and a [Donald] Trump administration is not whether to accept the deal, but how quickly or slowly they’ll use their capacities to change the structure of the Islamic Republic, its policies and causes.”

During the past year, the Committee to Protect Iranian Interests has organized an array of activities, such as coordinated demonstrations after Friday prayers and several technical conferences featuring speakers harshly opposed to the deal, including the former head of Iran’s Atomic Energy Organization, Fereydoun Abbasi-Davani, who survived an assassination attempt in November 2010 by agents Iranian authorities say were linked to Israel and the United States. A week before the JCPOA was signed on July 14, 2015, anti-deal activists staged a three-day sit-in in front of parliament in Tehran, while rallies were held in other Iranian cities.

The Committee to Protect Iranian Interests has brought together under its flag several politicians, university professors, former Islamic Revolutionary Guard Corps officers, journalists and students. Mataji told Al-Monitor he and his group believe that events over the past year “prove that we were right” to oppose the deal.

“Iran has fulfilled all of its commitments, which are nothing but losses. … The JCPOA couldn't prevent the imposition of fresh sanctions against Iran.”