Sheikh Naeem Gabr, the general coordinator for the Tribes of North Sinai Coalition, speaks to Al-Monitor about the impact the protracted battle between the army and extremist groups has had on Sinai residents. 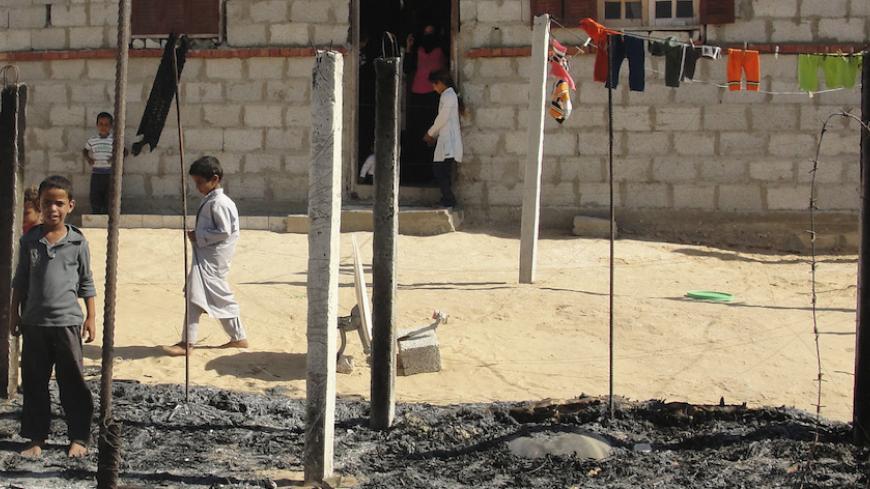 Boys look at a burned area around a house after assaults on militant targets by the Egyptian Army, in a village on the outskirts of Sheikh Zuweid, near the city of el-Arish in Egypt's Sinai Peninsula, Sept. 10, 2013. - REUTERS/Stringer

The battle in the northern Sinai Peninsula between the Egyptian military and extremist groups is still raging amid talk about development and the parliament agreeing to the government's plan to carry out King Salman bin Abdul-Aziz Al Saud's development plan for Sinai. Sheikh Naeem Gabr, the general coordinator for the Tribes of North Sinai Coalition, spoke to Al-Monitor in an exclusive interview concerning the tribes' stance on the battle, as well as his assessment of Salman's plan for developing Sinai and how the military curfew hinders any attempts at development.

Gabr stressed that both Muslims and Christians have been targeted by recent attacks, in an attempt by radical groups to "undermine stability." While he commended the Saudi plan for developing the region, he pointed out that it does not include the areas in the northern part of the peninsula that are witnessing the fiercest battles. He stressed the importance of development, calling it "the greatest weapon against terrorism."

The tribal leader expressed his view that the region's parliamentarians were not effectively securing support for their constituents, saying, "They must use their authorities as members of parliament for the good of the governorate."

Al-Monitor:  Bayt al-Maqdis announced it was claiming responsibility for the killing of Reverend Rafael Moussi. Is this event an indicator that the organization is targeting Copts in northern Sinai?

Gabr:  The organization has been targeting Copts for a long time, whether in el-Arish or Shaykh Zuwaid. This event is not the first of its kind in Sinai, nor will it be the last.

Al-Monitor:  The phenomenon of Copts emigrating from Sinai out of fear of being targeted continues. Has the state not succeeded in coping with this phenomenon?

Gabr:  The Copts in el-Arish have known for a long time that they are being targeted. It isn’t that the state has failed in defending them, for it is very difficult to protect every Copt in northern Sinai. Rather, Copts must exercise caution and deliberation, as this organization wants to stir confusion and tarnish the image of the state. And so I urge Copts not to emigrate from northern Sinai; the solution is not to abandon [their] home to extremists, for this organization targets Christians and Muslims both. It seeks to undermine stability.

Al-Monitor:  Parliament approved the government's plan to carry out King Salman's program. What's your assessment of that plan, which is divided into two parts: establishing a university and side-road projects?

Gabr:  The plan encompasses all regions of Sinai, not only the north. This is a good thing, but the inflamed regions in northern Sinai, those which are witnessing the skirmishes between the army and the extremists, are absent from this plan. It's necessary to provide for development in those areas, for development is the greatest weapon against terrorism.

Al-Monitor:  Are there projects needed by the Sinai governorate that the government has ignored, which aren't covered by King Salman's program?

Gabr:  Interest in bringing water to all regions of Sinai is a must, as well as bringing back the railway project that would connect Al-Wadi Al-Jadid with Rafah, which halted shortly after it was begun. Also, [we] must focus on agricultural development and cultivating the rich soil available in the governorate.

Al-Monitor:  With the passage of the fourth straight year of military curfew in Sinai, does this hinder investment projects?

Gabr:  Absolutely. The curfew prevents any efforts at development in Sinai. Residents cannot walk about after 4 p.m., and transportation grinds to a complete halt. How can development investment projects succeed [like that]? How can life in Sinai simply come to a halt in the afternoon? The curfew gives terrorists the opportunity to move about inside the governorate freely, and before we talk about development we must provide two important elements now absent from Sinai: communications and transportation.

Al-Monitor:  Does the ongoing curfew conflict with President Abdel Fattah al-Sisi’s statements during his interview on a television program last month that terrorism affects no more than 3% of Sinai’s surface area?

Gabr:  The curfew prevents citizens in Sinai from aiding the armed forces in informing on any foreign elements in their area, for they are [trapped] inside their homes. The state should reconsider the issue of the curfew that it is imposing on northern Sinai.

Al-Monitor:  Most Egyptians believe that terrorism afflicts every inch of Sinai. How can the government succeed in reassuring Egyptians, and the rest of the world, that it doesn't exceed 3%?

Gabr:  Terrorism isn't a geographic area; it's an idea. That idea is spread throughout all governorates of Egypt. Focusing exclusively on Sinai is deeply unfair to [us]. The government must stop repeating that Egypt is fighting terrorism, for it is harming tourism and preventing any tourist from coming to Egypt. The entire world is confronting terrorism, but no one else talks like this. The second issue concerns the way in which information is provided on the battle between the armed forces and the extremists, so that the world will believe us. Namely, there must be transparency without either exaggerating or minimizing events.

Al-Monitor:  Do you agree with Sisi's statements that a change is taking place in Sinai, following the neglect it suffered?

Gabr:  Development will not happen in Sinai without the participation of its native sons. We are ready to cooperate with any investor by providing lands, free of charge, where tribes are currently squatting without documentation. But the tribes are in total control of these lands. Meanwhile the state says that it will begin [working on] development, but we are waiting for this to be implemented on the ground, and not in mere rhetoric.

Al-Monitor:  Sisi stressed that development operations in Sinai will not end for at least two years. Is this long enough to bring about development in the governorate?

Gabr:  Development in Sinai isn't contingent upon a limited amount of time, but rather upon providing security. It is very difficult to define the implementation of this because the battle between armed forces and the extremist gangs is still ongoing. However, even in spite of that, the reconstruction of Sinai must continue — even if terrorism persists for a long period of time. And that's because the absence of development in Sinai is what creates terrorism inside of the governorate, for the residential vacuum and the absence of infrastructure serves as the genesis for the wells of terrorism in Sinai.

Al-Monitor:  Where do the tribes in northern Sinai stand concerning the battle between the armed forces and the takfiri gangs?

Gabr:  Sinai's local inhabitants, in all [Egypt's] wars, have always taken honorable positions. The truth is that there are more tribesmen who have been killed in service to the homeland than army soldiers who have died in Sinai, but the state doesn’t announce the names of those martyrs who hail from the tribes of Sinai. Therefore, I call on the state to announce the [names of] those who have sacrificed and the martyrs, the sons of Sinai. The truth is that, at the present moment, there is a chasm separating the tribes from the state. The tribes are no longer relied upon in the battle as used to happen in the past. Coordinating between the state and the tribes guarantees that foreign elements will not exist in Sinai. There must be cooperation with the tribal sheikhs, and not [only] the youth, for recently the tribal sheikhs and leaders have been marginalized, and [the state] relied on a group of youths who had no experience.

Al-Monitor:  How does parliament play a role in securing the demands of Sinai's local inhabitants?

Gabr:  Parliament formed a parliamentary committee to visit northern Sinai, but the visit was delayed. [However], the demands of the people of Sinai are clear and don't require parliamentary visits. There are members of the house of representatives who hail from this governorate who know our demands well. The first of them is the repudiation of [forced] dislocation, providing all services in Sinai, the need to cooperate better with the [ordinary] local inhabitant of Sinai. Locals harbor security fears despite the fact that terrorism happens in all of Egypt's governorates. After all, the former prosecutor general, Hisham Barakat, was not killed in Sinai, but in Cairo.

Al-Monitor:  How do you evaluate the parliament's performance toward the governorate and its demands?

Gabr:  I have met with representatives from northern Sinai many times. They told me that they are exerting tremendous efforts to demand that the government and the various ministries [bring] development to Sinai and provide services to its people. But they have not been heeded by officials. The ministries always make excuses that the armed forces are responsible for everything, large and small, in Sinai. In truth, I'm not satisfied with the performance of the representatives from northern Sinai. They must offer services and secure the demands of the locals, and not surrender. They must use their authorities as members of parliament for the good of the governorate.