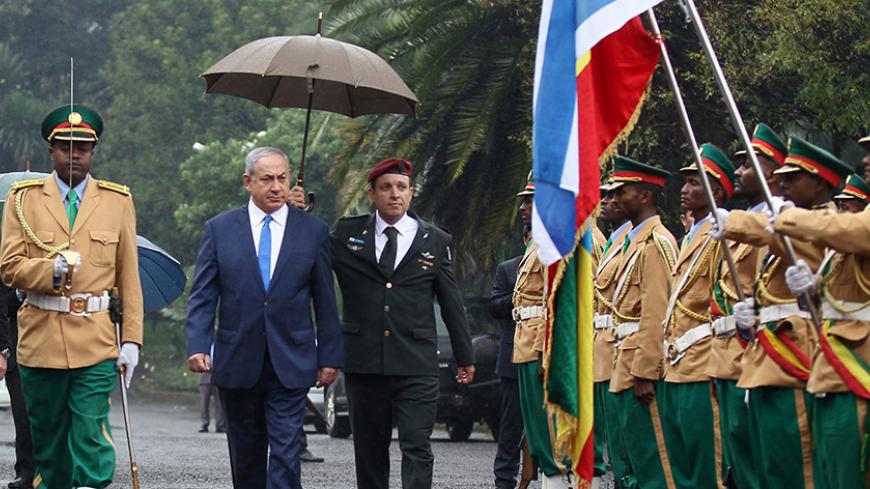 CAIRO — Egyptian-Israeli relations are witnessing unprecedented cooperation under Egyptian President Abdel Fattah al-Sisi. Since the signing of the Camp David Accords in September 1978, Egypt has cooperated with Israel on certain matters, but what is new is the Israeli side’s attitude. As Sisi denies Egypt its leading role in the region, the Israeli political administration continues to hold talks with regional countries. Israeli Prime Minister Benjamin Netanyahu announced that relations with Turkey were normalized again June 28, and that he had briefed the Egyptian president on the progress of the talks with Turkey. Netanyahu gave no details, however, about his phone call with Sisi.

Only four days later, Netanyahu announced a whirlwind tour of Africa to visit Uganda, Kenya, Rwanda and Ethiopia, as Israel sought to embellish its image and change it from a colonial entity to a state that enjoys bilateral security and economic cooperation with African countries.

Meanwhile, the Egyptian Foreign Ministry announced July 10 a visit to Israel by Foreign Minister Sameh Shoukry. The ministry described the visit as “important,” as Shoukry's meeting with Netanyahu was the first visit by an Egyptian foreign minister in nine years. Shoukry had met with Palestinian President Mahmoud Abbas on a similar visit to Ramallah on June 29, during which he conveyed a message from the Egyptian president to his Palestinian counterpart. The Egyptian Foreign Ministry did not disclose the content of the message, and the two sides agreed to coordinate in the days following the visit.

Tarek Fahmy, the head of Israeli studies at the National Center for Middle Eastern Studies, told Al-Monitor that Shoukry’s visit is an exploratory visit aimed at discovering the dimensions of the Israeli position on ideas previously put forward by Sisi in regard to the Arab initiative, all the while listening to the Israeli proposals regarding any amendments or ideas related to this initiative.

Fahmy explained that communication between Netanyahu and Sisi following the normalization of the Israeli-Turkish relations came to reassure the Egyptian side that the Gaza Strip is still under siege and that Turkey’s calls to establish a port, a floating airport or a border island in Gaza have not been fulfilled. Therefore, the agreement satisfies both Egypt and Jordan. Jordan dreads the expansion of the influence of Hamas, which is considered an ally of the political opponents of the ruling regime in both Egypt and Jordan.

Fahmy said that Israel's moves in Africa — especially in the Nile Basin countries — came as an obstacle to Egypt with respect to the national security file. He shared his view that the moves aim to support Ethiopia in completing the construction of the Renaissance Dam, which will contribute to the development of Israeli agricultural production in Ethiopia.

Fahmy hinted that Egypt aims to hold a tripartite summit between Palestine and Israel in Sharm el-Sheikh to reach a solution before the holding of the Arab summit in Nouakchott, Mauritania, this month.

He predicted that Jordan will join the summit in Sharm el-Sheikh, being an active party to the issue of the Israeli-Palestinian conflict, and pointed out that the Egyptian actions are taken amid complete coordination with Saudi Arabia so as to agree on a final statement at the Arab summit.

In another tweet, he said, “Israel is becoming a kingmaker,” and noted that the transfer of the Red Sea islands of Tiran and Sanafir to Saudi control and the meetings held between Saudi officials and Israelis will reveal a lot.

On the other hand, Israeli Deputy Knesset Speaker Ahmad Tibi asked in a July 10 tweet how Netanyahu could talk about a two-state solution following his meeting with Shoukry on the same day when the Israeli government agreed to transfer 50 million shekels ($13 million) for the construction of Israeli settlements in the Palestinian city of Hebron.

For his part, Hatem Bashat, a member of the Egyptian parliament and the chairman of the Committee on African Affairs, said that Shoukry’s visit to Israel is a serious step toward the desired peace between the Palestinians and Israelis, and stressed that Egyptian-Israeli relations cannot be deemed close. The visits and talks that are being carried out, he said, are calculated steps aimed at pleasing the West on the one hand and maintaining the goals of the Palestinian cause on the other.

In a telephone interview with Al-Monitor, Bashat said that the recent Israeli moves in Africa are an attempt to extend economic influence over the region.

He added that Netanyahu's visit to Africa revealed the intentions of some African countries in terms of dealing with Israel in the region, and explained that such visits have a negative impact on Egypt's historical record in the African continent.