Why Egypt is suddenly so interested in Israel-Palestine conflict

Egyptian Foreign Minister Sameh Shoukry's recent visit to Israel has sparked controversy and raised questions as to why Egypt is trying to resolve the Palestinian cause while drawing closer to Israel. 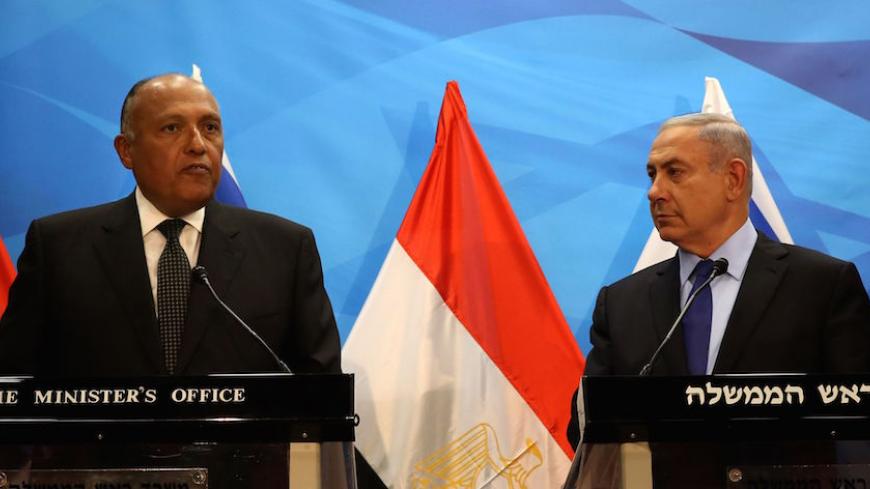 On July 10, Egyptian Foreign Minister Sameh Shoukry visited Israel in the first trip of its kind since 2007. This visit came as part of a broader vision announced by President Abdel Fattah al-Sisi in a speech he gave during the opening of the new Assiut power station May 17. In his speech, Sisi declared his intent to bring about a just and comprehensive peace between the Israeli and Palestinian sides, and put an end to the conflict that has raged for over half a century. He linked a “warmer peace” between Egypt and Israel to a peace agreement between the Israelis and Palestinians being reached. This followed Shoukry’s visit to Ramallah on June 29, where he met with Palestinian leaders.

The Egyptian foreign minister’s visit to Israel sparked anger at the popular level for two reasons. First, the joint news conference between Shoukry and Israeli Prime Minister Benjamin Netanyahu was held in Jerusalem, not Tel Aviv, and Shoukry was hosted for dinner that night in Jerusalem. This carried an implicit Egyptian recognition of Israeli sovereignty over Jerusalem as well as its status as the capital of Israel. Second, the visit was accompanied by the image of Shoukry and Netanyahu watching the final game of the 2016 Euro Cup together in the Israeli prime minister’s residence. Netanyahu posted the photo to his Twitter account, commenting, “Tonight Sara [Netanyahu’s wife] & I hosted Egyptian FM Sameh Shoukry in our Jerusalem home. We made time to watch the #Euro2016Final.”

It should be noted that the Egyptian Foreign Ministry clarified the latter point: ministry spokesman Ahmad Abu-Zaid said, “After concluding the talks Netanyahu asked to pass by the television in order to see the result of the game between France and Portugal. Shoukry walked alongside him on the way to exit [the building].”

Consistent with the state of popular anger at the visit, member of parliament Mustafa Bakri brought forward a demand for an explanation concerning the foreign minister’s visit to occupied Jerusalem to hold talks with the Israeli prime minister, especially following Netanyahu's visit to a number of countries in the Nile Basin. According to Bakri, these visits carried negative messages indicating Israeli intervention in Nile River affairs, something he claimed could impact Egyptian national security.

Shoukry’s visit to Israel was preceded by Sisi’s announcement that he was preparing to make every effort to reach a settlement to the Palestinian cause, and afterward to effect a warm peace with Israel. A number of steps indicate Egyptian-Israeli convergence, and foremost among them are: the proposal to widen the "circle of peace" with Israel to embrace additional Arab states, security cooperation between the two sides to combat terrorism in the Sinai Peninsula, a meeting between Sisi and a delegation of Jewish American community leaders in February, Egypt voting for the first time to allow Israel to join the UN Committee on the Peaceful Uses of Outer Space Affairs and finally the reopening of the Israeli Embassy in Cairo after it had been closed for four years.

Egypt’s moves to resolve the Palestinian cause and draw closer to Israel raise questions concerning the reasons behind these steps, particularly at a time when President Barack Obama’s term is drawing to a close and the United States, which has historically acted as the official arbitrator of the peace process in the region, is increasingly preoccupied with the presidential elections set for Nov. 8.

Former Egyptian Foreign Minister Mohamed Orabi clarified the reasoning behind these moves, telling Al-Monitor, “They seek to restore the Palestinian cause to the focus of Egyptian and regional interest once more, following years of neglect during the revolutions of the Arab Spring that erupted in early 2011, and [Egyptian] preoccupation with a succession of internal and regional crises.”

Orabi, who once chaired the Committee on Foreign Relations in the Egyptian House of Representatives, said, “Solving the Israeli-Palestinian conflict demands a painstaking effort [due to] the many historical layers [of conflict] between the Israelis and Palestinians. Nor would those efforts necessarily be crowned with success, given the conflict’s complexity and the entanglement of regional and international powers in the conflict.”

In a related context, a diplomatic source in the Egyptian Foreign Ministry told Al-Monitor on condition of anonymity, "The Egyptian role in solving the Israeli-Palestinian conflict stems from the fact that the Palestinian cause is an Egyptian responsibility even before it is an Arab responsibility.” Concerning the nature of recent Egyptian movements, he stressed that they “support international efforts, particularly French efforts, at a time when the United States is preoccupied with presidential elections scheduled for this November.” He ascribed this to the fact that “Cairo has no independent vision or plans concerning these regional or international proposals.”

For his part, Mohamed Gomaa, a specialist in Israeli affairs at Al-Ahram Center for Strategic Studies, linked Sisi’s speech about a warm peace that might be established following the resolution of the Palestinian cause, and which was followed by Shoukry’s visit to Israel, to the security situation in Sinai. He told Al-Monitor, “It is a preventive step, dictated by stark Egyptian fears and calculations concerning a 'hot summer' in the Palestinian arena — particularly if the cease-fire violations are repeated.” He noted that Egypt is worried about “what might result in terms of a potential fourth Israeli war on the Gaza Strip, as well as the consequences for the security of Sinai and Egypt more broadly. In addition, Cairo is sensitive to the dangers resulting from the [current leadership] vacuum, which casts a pall over the Palestinian political arena.”

Gomaa added, “Egypt has an interest in playing a role such as this, as it has been absent from most regional issues and crises. In so doing, its role has been marginalized by both its opponents and its allies. Egypt is in need of some sort of external political win.” Gomaa did not rule out the possibility that the Egyptian move to resolve the Palestinian cause was coordinated with its Saudi ally, which is eager to create a broad front to confront Iranian threats.

Concerning these Egyptian moves’ opportunities for success, Gomaa said, “Opportunities for success and failure are not determined in Cairo or Ramallah, but in Israel. It is Israel that has frustrated more than one attempt [to solve the conflict] and thwarted more than one international and regional initiative. Israel will not walk hand in hand with its Egyptian mediator to the end of the road. On the ground, nothing will change or stop — not settlement growth in the West Bank and Jerusalem and not the war on the Gaza Strip.”

Shoukry's recent visit to the West Bank and Israel and Sisi’s announcement that Cairo has returned to play a role in resolving this conflict reflects a desire to restore Egypt’s pivotal role in the Near East. This follows years where Egypt was preoccupied with internal issues following the outbreak of the revolution on Jan. 25, 2011, and the decline of Egypt’s regional role in favor of other regional powers — namely Turkey and Iran — that sought to fill the vacuum left by Egypt’s departure from the scene.