Israeli Arabs are unimpressed by the apology of Prime Minister Benjamin Netanyahu for his words during last year's election, sure that his apology video was directed at European ears. 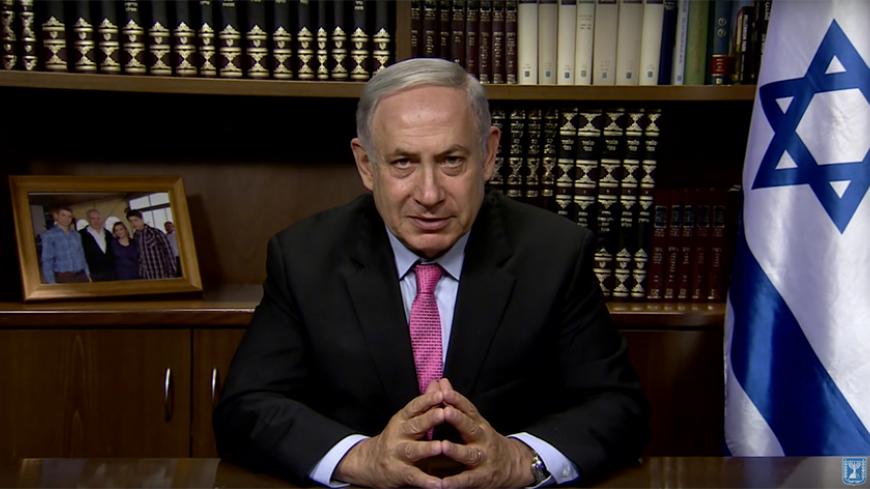 Israeli Prime Minister Benjamin Netanyahu addresses the Arab citizens of Israel during a public apology for remarks made during last year’s election season in this still image from a video posted to the prime minister’s YouTube channel taken July 25, 2016. - YouTube/Benjamin Netanyahu's office

What caused Prime Minister Benjamin Netanyahu to apologize this week for his infuriating statement on election day last year, that Arab voters were coming out "in droves" to the polls?

In a video clip that Netanyahu disseminated over the social networks, he explained in Hebrew and English to Arab Israelis that his election-day statement had been misunderstood, and that he had referred at the time to one specific Arab faction.

However, because of the electoral threshold law advanced back then by Yisrael Beitenu Chairman Avigdor Liberman to block the representation of Arab parties in the Knesset, the different Arab political factions had to unite into one party called the Joint List. Had Netanyahu forgotten this? And if Netanyahu had truly directed his words to one faction, why did he say that Arabs were “coming out in droves”?

In the video, Netanyahu urged Arab Israelis to take a more active part in Israeli society. “Work in droves, study in droves, thrive in droves,” Netanyahu told them. "I am proud of the role Arabs play in Israel’s success.”

The next day, Joint List Chairman Ayman Odeh hurried to respond to Netanyahu with a video clip of his own. He said that more than 100,000 Arabs who live in the unrecognized villages in the southern Negev area were not able to hear the premier's words, neither in English nor Hebrew, because “their homes are simply not connected to electricity.” Odeh added, “Like you, I am proud of our exceptional accomplishments … despite the discrimination and deprivation. And despite a prime minister that regularly incites against them.''

Clearly, the apology offered to Arab Israelis in a video (and not, for example, in a public speech in the Knesset or another official forum) was received with great distrust. A source in the Joint List argued this week in a conversation with Al-Monitor that his party is convinced that Netanyahu’s apology was not directed at Arab Israelis but for foreign ears alone. European and American ears, for example.

Ever since the dissemination of the “Arabs in droves” clip on the eve of election day (a move that according to many Israeli political commentators helped Netanyahu win the elections), bad blood has soured Israeli relations with the European Union. The EU views the prime minister as an inciter.

Sources in the Joint List believe that Netanyahu, who also wears the hat of foreign minister, listened to the advice of senior officials in the Foreign Ministry. These officials complained that in meetings held by Israeli ambassadors with their colleagues in the countries they serve, the issue of discrimination against Arab Israelis always comes up, together with the anti-democratic rhetoric of the prime minister on election day.

The EU member states want to see how the Netanyahu government is taking action to promote equality in work opportunities, resources, education and welfare for all its citizens. The Joint List members believe that by praising Arab academic achievements in different domains, Netanyahu was trying to prove to the international community that Arab Israelis are not subject to discrimination and in fact succeed in prestigious professions.

Last December, the government authorized a five-year plan for assistance to the Arab sector of a total of 15 billion shekels ($3.8 billion). The initiative was backed by Netanyahu, Minister for Social Equality Gila Gamliel and Finance Minister Moshe Kahlon. Gamliel consulted with the Arab Knesset members to promote the enterprise she called “historic” and faced numerous obstacles created by other ministers. But four days after the program was approved, Netanyahu froze it following the Jan. 1 terrorist attack on Tel Aviv’s Dizengoff Street carried out by a resident of the Arab town of Ar’ara, in northern Israel.

In the speech he delivered at the site of the attack, Netanyahu announced there would be new conditions for transferring the money to the local councils, as if the program hadn't already been approved by the government and he hadn't supported it himself. “There is wild radical Islamic incitement against the State of Israel in the Arab sector," he said. "I am not prepared to accept two states of Israel, a state of law for most of its citizens and a state within a state for some of them, in enclaves in which there is no law enforcement.” Then he tasked Ministers Ze’ev Elkin and Yariv Levin to consolidate a series of guiding principles and stipulations for the dispensation of monetary assistance.

“For half a year, he drove us crazy,” an Arab council head told Al-Monitor on condition of anonymity. “Only now, after we thought that money was actually going to start to flow, he comes along with a video clip and tries to argue that he is on our side and urges us to succeed in integrating into Jewish society.”

According to the council head, Netanyahu is trying to take credit for the program that Gamliel fought for like a lioness, and that Netanyahu had long hindered rather than helped advance. The council head as well as the Joint List members feel that Netanyahu made the video to mollify the European countries and especially the member states of the Organisation for Economic Co-operation and Development.

“Suddenly he’s not talking about incitement in the mosques,” said a cynical Joint List source on condition of anonymity, “or illegal building or a lawless enclave in Arab society in Israel."

“Netanyahu thinks that his words can convince the heads of the world’s countries that the Arabs of the state are thriving and flourishing,” concluded the council head. “Let’s see real action, not just talk. Only then will we believe him.”