Members of the Joint List feel that coalition head David Bitan's insulting Israeli Arabs is backfiring and instead strengthening and uniting the Israeli Arab sector. 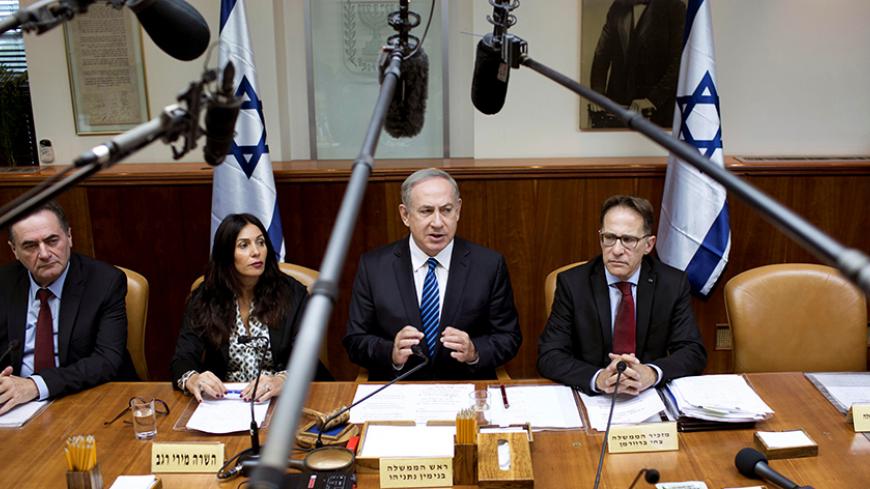 Knesset member and coalition chairman David Bitan (Likud) kicked off another storm over the weekend when he echoed Prime Minister Benjamin Netanyahu’s controversial statements during the last Knesset elections. Bitan went even further. At a public event on Dec. 10, Bitan defamed Israeli Arab citizens when he said, “If they weren’t able to come [to vote], that would be preferable.”

A similar sentiment about the vote of Israeli Arabs first appeared in a video clip disseminated by Netanyahu last election day, when the prime minister was afraid of losing the government. He used a scare technique on his constituents by saying "the right-wing government is in danger" and "Arab voters are coming out in droves to the polls.”

It is difficult to determine the effects of the clip on the election results, because no scientific study has been published to date on the subject. However, most political commentators agree that Netanyahu’s desperate plea to his voters on election day went a long way toward sealing his victory in the election.

Netanyahu apologized twice for his words. The first time was about a week after the elections, when he hosted a group of Arab and Druze mayors in his Jerusalem residence. They applauded when Netanyahu apologized to them and said, “I view myself as the prime minister of each and every citizen of Israel, without any prejudice based on religion, ethnicity or gender.” The Arab Knesset members, who were not invited to the meeting, rejected Netanyahu’s apology.

The second apology, in July 2016, generated a wave of speculation as to why the prime minister apologized again and at that specific point in time, a year and a half after the elections. Joint List Knesset members claimed in a conversation with Al-Monitor that the second apology followed international pressure that forced Netanyahu to publicize a video clip in which he called on Israel's Arab citizens to “thrive in droves.”

The prime minister has a very active Facebook page on which he posts a number of statuses a day on a broad variety of issues. He also attacks his rivals as well as the media, and sometimes he reports decisions he makes. Nevertheless, despite his own apologies, Netanyahu did not see fit to reprimand the coalition chairman over the latter’s negative statements directed at one-fifth of the state’s citizens. Netanyahu's ominous silence has been interpreted by Israeli Arabs as tacit agreement with Bitan, a politician viewed as the prime minister’s associate and yes-man, who clearly stated that he would prefer that Arab citizens not participate in Israel’s democratic process.

The reactions were not long in coming. Knesset member Yousef Jibrin of the Joint List called on the prime minister to fire Bitan from his present position. Jibrin also made the obvious comparison, asking, “How would the political system in France react if a high-level politician said that he’d prefer if Jews wouldn’t come to the polling booth?” Joint List chairman Ayman Odeh tweeted, “Racism … only serves to fuel our drive to increase our political power.” He expressed what most of the Joint List members had long thought: that the political pressures on them and the unremitting attempts of right-wing parties to excommunicate them only strengthen their electoral power within Israel’s Arab community.

In talks with Al-Monitor, Joint List Knesset members explained that they had come under harsh criticism and even boycott following their decision to refrain from participating in the funeral of former Israeli President Shimon Peres. That and other criticism as well as Netanyahu’s statements after the wave of wildfires in late November (hinting that most of the fires were Palestinian-nationalist motivated) created a sense of civil emergency among many of their constituents and unified their ranks.

The Joint List was established before the March 2015 elections, merging the various existing Arab parties. Its Knesset members, who are well-aware that their party loosely connects several subgroups that hold diverse positions, recently passed a resolution to hide the disputes and differences of opinion among them. Instead, all disagreements are to be resolved behind closed doors.

“In essence, we have no commonalities to keep us together,” one of the Joint List’s people told Al-Monitor on condition of anonymity, “except for the fact that we can maintain our position and our force via unity and solidarity.”

It's been about a year and a half since the Joint List became the third-largest faction in the Knesset. Initially, much criticism was heard from large swathes of the Israeli Arab public about being forced to vote for the Joint List because they were Arabs. But as time goes on, this criticism has been gradually waning.

Even the biggest critics of the Joint List within the Arab community have come to admit that the founding of the party was a no-brainer for Israel’s Arabs. This change was helped along by recurrent verbal attacks against the Joint List Knesset members and incendiary statements targeting large swathes of the Israeli Arab public, depicting them as supporters of terrorists and arsonists. This week, Hadash activists told Al-Monitor that they expect the Joint List Knesset members to do more than take action on discrimination against Arabs in comparison to the Jewish public in Israel. They feel that the Knesset members now must also shoulder the task of preserving the most basic civil rights for their constituents, rights that are being gradually eroded by Netanyahu’s right-wing government.

As far as they are concerned, Bitan’s actions are another step in the deterioration of relations between the official Israeli establishment and the Arab citizens of the state. After all, Bitan is not only a Knesset member for the Likud, but also chairman of Netanyahu’s coalition. And in contrast to Netanyahu’s words on election day, Bitan did not say what he said under the pressure of losing the government. Instead it was an explicit statement expressing a worldview that has penetrated the Israeli public under Netanyahu’s inspiration: that Israeli Arabs not only threaten the rule of the right, but also endanger from within the existence of the State of Israel. And in light of these threats, they should be distanced from the voting process.

So far, Bitan has not apologized nor been coerced to retract his statement. If anyone did believe Netanyahu's apologies, it should now be crystal clear that he was not sincere.