Despite the electoral achievement of the Joint List becoming the Knesset's third-largest party, its supporters felt defeated as the the Israeli majority voted for the right. 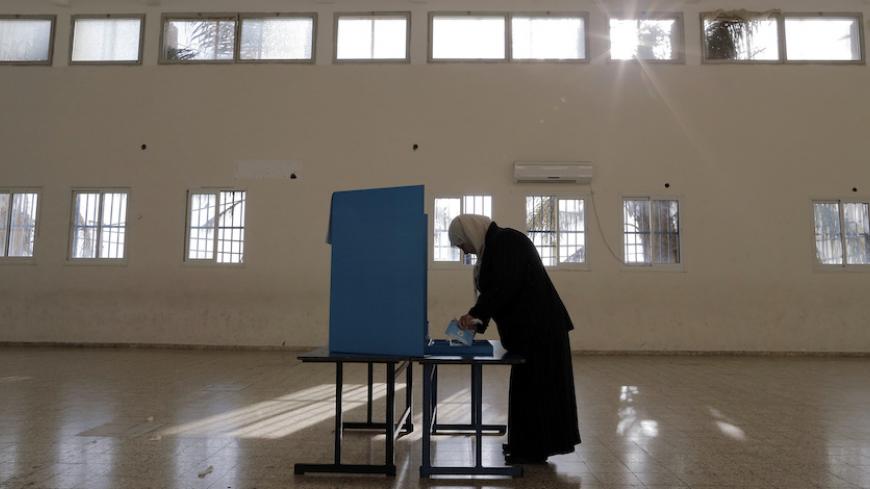 An Israeli Arab stands behind a voting booth before casting her ballot at a polling station in the northern town of Umm al-Fahm, March 17, 2015. - REUTERS/Ammar Awad

At 9:45 p.m., soon after election results were televised March 17, the heads of the Joint List arrived at their election night headquarters in the Abu Maher wedding hall in Nazareth. Even though they fulfilled their goal of becoming the third-largest party in the next Knesset (with 13 seats), they were disappointed. The party will not be able to block a right-wing government, and the promise to work for a fruitful coexistence with the Jewish sector appears as distant as ever.

Earlier that day, Israeli Arabs who already voted, and those who still debated whether to participate in the political game, realized that their participation was not at all welcomed. Moreover, it was perceived as a hostile act. Prime Minister Benjamin Netanyahu tried to prod right-wing electors to vote by saying, “The Arabs are going to the polls in droves.” But the facts regarding Arab voting percentages say otherwise. While the voting percentage among Israeli Arabs did rise in comparison with the previous election, and numerous Arabs returned to vote after more than a decade of boycotts, they did not go out “in droves.” Most of the Islamic movement people apparently paid no heed to the calls of the Joint List and the promise for change; instead, they remained in their homes. Even the opponents of the Balad movement among Hadash supporters vacillated throughout the day on whether to vote or not.

Hours before the polls closed, I saw that the “going in droves” description had no basis in reality. Joint List activist Mohammed Mahajneh said to me around noon, “You need to understand that the men have not yet returned from work, and the women won’t come alone to vote. They wait for their husbands.”

''But Netanyahu said that you are bringing your voters in droves, in buses and in a large fleet of vehicles,'' I kept asking. The Joint List headquarters people smiled bitterly. They knew that that was an intimidation spin of the prime minister to prod the fence-sitters to cast their votes for him. The Joint List activists hoped that Netanyahu’s threat would serve to galvanize the Arab electorate, but their early-morning enthusiasm dissipated by evening. The sensations of anger and resentment had their effect.

The Joint List activists went out of their way to persuade more and more of the electorate to come and vote; the activists worked up until 10 p.m., the hour when the polls closed. Cars with loudspeakers on their roofs emitted ear-splitting messages, “Come vote; that’s the proper response to the radical right that seeks to discriminate against us.” Afterward the announcement was updated, referring to Netanyahu's remarks, arguing that voting was the answer to Netanyahu who turned Arab votes into a "threat" and a "danger." But the electors did not respond. Suddenly, the political game seemed ugly and disillusioning.

“Netanyahu is prime minister of only a portion of the citizens, not of all of them,” sighed Ali Mouhana, a Joint List activist. “We were here [first] and we want to be integrated as equal citizens with understanding and recognition of our rights. We do not constitute any kind of threat on any Israeli political group or on Israeli society, on the contrary. We want to be part of it because this is also our land.”

But at a time when Israeli public opinion has turned Israeli Arabs into an entity plotting against Israel’s democratic foundation and the right-wing rulership, no amount of calming words and supplications to give coexistence a chance could be of any help.

Despite the 13 seats, there is no spirit of victory. Although they might have hoped for even more votes, in principle the goal was reached. But circumstances changed. The Joint List will not operate as an obstructive bloc, and not even tip the scales.

Joint List head Ayman Odeh circulated among the TV cameras. He talked about a historic achievement and the opening of a new page, but the few activists who were present did not buy his slogans. No matter what they do, no matter what they say, most of the Jewish electorate made its statement loud and clear, leaving the Joint List with a bitter aftertaste.

The 20th Knesset is more right-wing and more ultranationalistic. It's doubtful whether the Joint List, which promised its Arab voters to right certain wrongs as part of its campaign goals, will be able to create real changes. While 13 seats is an impressive achievement, it's doubtful whether this constitutes a historic moment in the representation of Israeli Arabs.

In the balance of power that was created, when the Arab vote is described by the Israeli prime minister as "threatening" and "dangerous," Odeh's hopes to head an important Knesset committee suddenly appear to be a long shot. Instead, it's more likely that the representatives of the right-wing parties will quarrel with the Arab representatives in the Knesset. It's more likely that the message transmitted to the Arab public in Israel will be that their presence in the Israeli parliament is unwelcome. Therefore, despite the size of the Joint List, it will probably find it difficult to present significant achievements to its constituents. Those who cast doubts on the faction’s promises for reforms against discrimination will discover that they did not err.

Not many people thought the chances were high that the Joint List headed by Odeh would survive for long after the election in its unified format. There are major ideological differences and diverse worldviews typifying the parties that make up the list; also, there are troubled relations among some of its people. But the real threat for preserving the Joint List's unity stems from the fact that its 13 Knesset members will find it difficult to present significant achievements to the constituents, achievements that will prove to them that the unification was worth it. They will find it hard to generate constitutional change, or even an image change regarding their status as Israeli Arabs.

If Netanyahu succeeds in establishing a strong right-wing coalition, the Joint List Knesset members likely will fail to hang in there as a unified entity for four years. Even if they overcome all the disputes and gaps between them, even if they hold tight to the crude stitches holding together the list, Israeli-Arabs probably won't go out to the polls "in droves” in the next elections.