Analysts say the time is ripe for the Turkish government and the PKK to talk peace, but such a move could get in the way of President Erdogan's political ambitions. 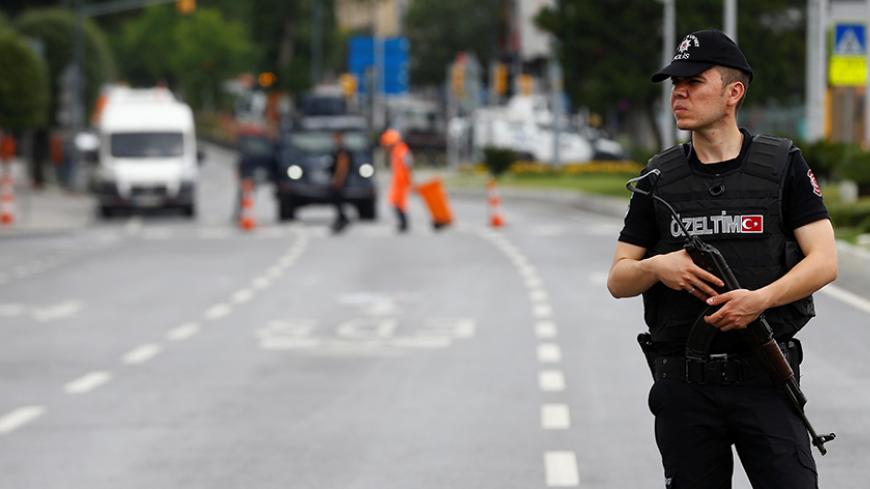 A police officer stands guard near the site where a Turkish police bus was targeted in a bomb attack in a central Istanbul district, Turkey, June 7, 2016. - REUTERS/Osman Orsal

ANKARA, Turkey — Binali Yildirim had been prime minister only two weeks when suicide bombers from the Kurdistan Workers Party (PKK) and its affiliate, the Kurdistan Freedom Falcons, detonated two car bombs — one in Istanbul, one in Midyat, southeast Turkey. They killed 18 people.

“These days, the news comes, directly or indirectly, from the terrorist organization saying, ‘We can negotiate, we can lay down arms, we should talk,’” Yildirim told reporters. The government rebuffed the PKK because, he said, “There is nothing to discuss."

Neither Selahattin Demirtas, co-leader of the pro-Kurdish Peoples’ Democratic Party (HDP), nor academics who study the Kurds said that they had seen any evidence of a peace overture by the PKK. Academics have also said, however, that such a peace move was plausible because the PKK had good reason to return to the negotiating table. The same goes for the government. By official count, Turkey's security forces have suffered nearly 600 fatalities and 3,000 wounded since fighting resumed in July 2015. In this case, why haven’t both sides put out feelers on peace talks?

Gareth Jenkins, an Istanbul-based analyst for the Silk Road Studies Program, told Al-Monitor the PKK’s interest in peace is sincere. “This is not because the PKK particularly likes peace, but it’s because the PKK is so heavily committed in Syria and Iraq,” Jenkins said, referring to the campaign against the Islamic State being waged by the PKK and its Syrian affiliate. “The PKK doesn’t have the resources to conduct a third front.” Further, he argued, “The object of the [PKK] campaign of violence has been to pressure the Turkish government into talks.”

Nihat Ali Ozcan, who tracks the PKK for the Ankara-based Economic Policy Research Foundation of Turkey, offered three reasons why the PKK “needs peace.” To start, its leadership knows that neither it nor the government can win the war. It also knows that its decision to bring the battle into the towns and cities of southeastern Turkey has caused a lot of death as well as the destruction of homes and shops. “It was a strategic mistake,” Ozcan told Al-Monitor. “The PKK leadership knows it has lost public support.”

In addition, the PKK has suffered heavy casualties. President Recep Tayyip Erdogan said last week that 8,000 PKK fighters had been killed in Turkish military operations inside and outside Turkey.

All of this would seem to give the government an advantage at the negotiating table. Murat Yetkin, editor of the liberal Hurriyet Daily News, wrote on June 10, “The circumstances do now seem so right nowadays for the resumption of dialogue.”

This makes it all the more puzzling that Erdogan has ruled out a return to negotiations. He has repeatedly said the military will fight on, “until the last terrorist has been eliminated,” a goal that no government has achieved since the PKK took up arms in 1984.

“Erdogan has chosen a strategy of polarization and conflict promotion as a way of consolidating his position,” Ilter Turan, a retired professor of politics at Istanbul Bilgi University, told Al-Monitor.

For the past 18 months, Erdogan has increasingly focused on changing the constitution to create an executive presidency, a move that would officially give him much more power than he currently enjoys. To hold a referendum on the issue, he needs 330 votes in parliament, which is 14 more than his Justice and Development Party (AKP) has at present.

In early June, Erdogan signed into law a bill that would lead to lifting the immunity of 152 members of parliament. The legislators liable to prosecution — on charges ranging from graft to supporting terrorism — include all but four of the 59 pro-Kurdish representatives. The disproportionate emphasis on the HDP has been criticized by the Council of Europe and condemned by human rights groups.

Turan said the reason for Erdogan’s persuading parliament to lift the immunity of parliamentarians was to force new elections. Once the members of parliament have been convicted in court, they will have to resign their seats, and by-elections, where the normal system of proportional representation would not be applied, will be called.

“For all practical purposes, the by-elections become a first-past-the-post election, and this would in many instances lead to the AKP getting the seats that used to belong to the HDP,” Turan said. Political observers expect this process to take place in the next few months, enabling the AKP to take 330 seats in parliament and call a referendum by the end of the year.

Opinion polls, however, predict that the Turks will not approve an executive presidency. Metropoll, the firm that came closest to predicting the results of the June 2015 elections, examined the issue in face-to-face surveys in 28 of Turkey’s 81 provinces.

Metropoll also asked people why they did not want Turkey to change from a parliamentary system to a presidential one. In response, nearly a quarter (24.8%) said an executive presidency “would be a dictatorship.” Another 9.7% said such a system would “damage democracy.” A further 4.8% said bluntly, “I don’t want Erdogan to be a president.”

Although the polls are against Erdogan, it would be foolish to write off his dream of an executive presidency. The man is an arch manipulator of the electorate. In five months last year, he turned the AKP around from an embarrassing 40.9% in the June elections to a triumphant 49.5% in November snap elections.

“He may not get his way,” Turan said of Erdogan’s quest, “but that’s what he will try to do. So far he has been extremely successful in mobilizing votes to get what he wants.”

Meanwhile, the war with the Kurds grinds on. On June 24, the PKK killed six soldiers in ambushes in the southeastern provinces of Hakkari and Mardin. The day before, a car bomb exploded outside a police station in Omerli, Mardin, killing one civilian and wounding 16 people.

In 12 months of fighting across Turkey, about 700 civilians have been killed, according to the HDP, which has kept lists of casualties. More than 100,000 people have been displaced, and thousands of homes and shops have been destroyed. In the heavily contested district of Sur in Diyarbakir, whole blocks of housing and shops were demolished after the battle had ended.

Jenkins said Erdogan has rejected the path of peace so often that he has “talked himself into a corner.” “Sadly, we’re going to have this fighting as long as Erdogan retains his domination of Turkish politics,” Jenkins said.

This would imply that Erdogan is pursuing the military option, with all its death and destruction, because it suits his aspiration of becoming an executive president. “The way he conducts politics,” observed Turan, “is very closely linked with his own personal, political ambitions, irrespective of the outcome for the rest of society.”