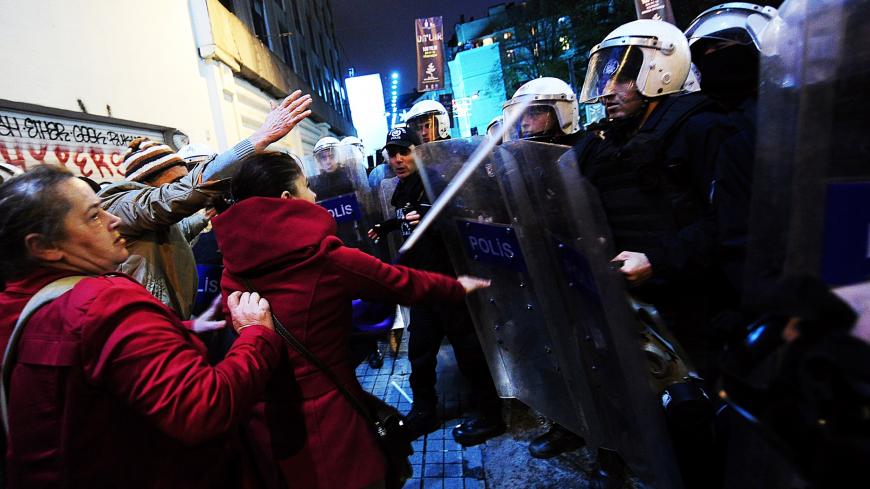 Turkish riot police hold shields to push back protesters demonstrating against attacks launched by the Islamic State targeting the Syrian town of Kobani, on Dec. 1, 2014, in Istanbul. Demonstrators denounced Turkey's unwillingness to intervene militarily against the Islamic State. - OZAN KOSE/AFP via Getty Images

Some 20 Kurdish politicians and activists were arrested today after prosecutors in Ankara issued warrants for 82 people accused of inciting public unrest and abetting terrorist acts and propaganda. The charges stemmed from deadly riots that erupted six years ago across the mainly Kurdish cities in the southeast when the Syrian Kurdish town of Kobani on the Turkish border was besieged by the Islamic State. Incensed by the Turkish government’s refusal to come to Kobani’s aid, thousands of Kurds took to the streets. The protests turned violent, leaving 46 people dead and over 600 others wounded.

Prosecutors accuse the pro-Kurdish Peoples’ Democratic Party (HDP) of igniting the unrest in tandem with the outlawed Kurdistan Workers Party (PKK). The mayor of the eastern city of Kars, Ayhan Bilgen, and three former HDP lawmakers were among several prominent HDP members who were detained today. The Ankara chief prosecutor's office said indictments were being drawn up for seven other HDP lawmakers over their alleged connection to the riots.

Why it matters: The timing of the arrests has prompted speculation that the real purpose is to deflect attention from the country’s mounting economic worries by further polarizing Turks and Kurds. This in turn, will make it harder for the secular opposition to continue its informal electoral alliance with the HDP. Kurdish votes helped the opposition wrest Istanbul and Ankara from the ruling Justice and Development Party in mayoral elections last year.

Turkish President Recep Tayyip Erdogan has made demonizing the HDP part of his electoral strategy since June 2015, when the pro-Kurdish group denied his Justice and Development Party (AKP) a ruling majority in parliament for the first time since it came to power in 2002. That same year Erdogan ended peace talks with the PKK. A 2½-year-long cease-fire with the militants collapsed.

Erdogan has since relied on his nationalist ally, Devlet Bahceli's Nationalist Movement Party (MHP), to sustain his majority in the parliament and to win the presidential elections in 2018. In exchange, Erdogan has met nationalist demands to suffocate the HDP, locking up scores of HDP lawmakers and mayors. The party’s charismatic former co-chair, Selahattin Demirtas. is among them.

Demirtas was jailed in 2016 over a cocktail of thinly supported “terror” charges, including his alleged role in the Kobani riots, which carry a combined penalty of 142 years. With his biting wit and clarity of message Demirtas is seen as the only political leader capable of effectively challenging Erdogan — if not at the ballot box, then on the soapbox. It’s unlikely Demirtas will be freed anytime soon as prosecutors erect new cases against him just as others are overturned.

What’s next: The economy is in the doldrums as joblessness and inflation spiral, all compounded by the fallout of the COVID-19 pandemic. The AKP continues to slip in the polls. According to the results of an August survey conducted by Ankara-based Metropoll, the AKP would get only 31.3% of the vote if an election were held today. The figure does not take into account 20% of respondents who said they were undecided.

Presidential and parliamentary elections are not due until 2023. Yet it seems unlikely that Erdogan will be able to turn the economy around in time to clinch a second presidential term in a first round of balloting, even with a bit of tinkering. So whipping up nationalist sentiment against Turkey’s supposed foreign and domestic foes remains the time-tested method of last resort to keep his base intact. The question now is whether the AKP will carry things further; will more HDP lawmakers be stripped of their immunity, prosecuted and kicked out of parliament? While this could be seen as a step too far, it could bolster the AKP and MHP’s share of seats, making it even easier to push through legislation tailored to serve the alliance's needs. Then again, the HDP could preempt such moves by withdrawing from parliament, a move that would please hard-core Kurdish nationalists within in its base.

Know more: Read Ayla Jean Yackley on how Erdogan has finally caved and hiked interest rates to rescue the collapsing Turkish lira and Diego Cupolo on the mass arrests of human rights lawyers.