Allegations regarding the authenticity of Turkish President Recep Tayyip Erdogan's diploma, and therefore his position, are gaining substance. 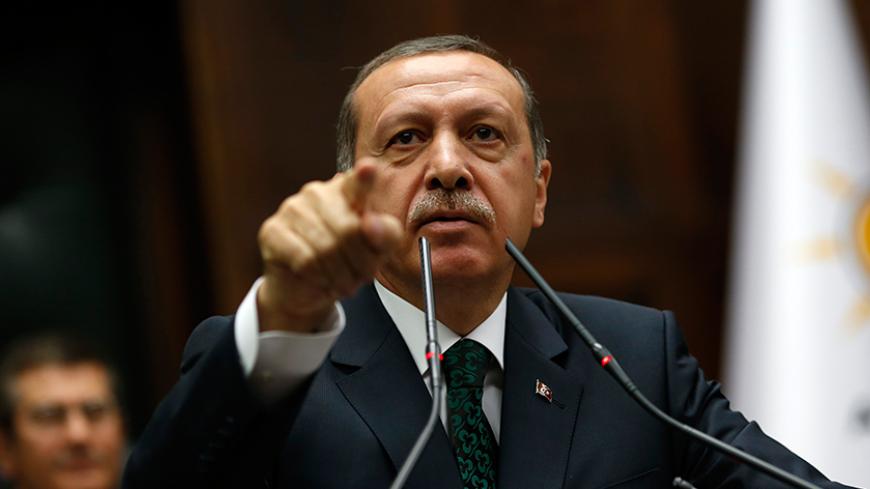 Turkish Prime Minister Recep Tayyip Erdogan addresses members of parliament from his Justice and Development Party at the parliament in Ankara, June 25, 2013. The next year, he was elected president. - REUTERS/Umit Bektas

Questions about the legitimacy of Turkish President Recep Tayyip Erdogan's university diploma have been simmering for a while and now have the potential to become a major issue.

Erdogan went to an imam-hatip school, a high school-level institution that educates religious preachers. During the 1970s and 1980s, graduates of those schools could pursue their higher education only in theology. Erdogan, however, was thought to have graduated from Marmara University’s Faculty of Economics and Administrative Sciences; to have registered there, he would have needed a certificate to prove he was also educated at a school other than an imam-hatip school.

There starts the scrutiny of Erdogan's diplomas, or rather, whether he has valid documents to prove he is eligible to be president.

The latest allegation is that he doesn't have a valid university diploma. If true, it would have enormous consequences because, according to the Turkish Constitution, the president should be an alumnus of a university or an institution of higher education. The constitution's Article 101 stipulates that and it is unequivocal.

At first glance, the allegation about Erdogan didn't seem to make a lot of sense, particularly seeing as how Erdogan is now in his second year as president; presidential spokesman Ibrahim Kalin ruled out any wrongdoing, simply saying that the rumors were ridiculous.

The allegation initially was raised with the Higher Electoral Board by a former judge, Omer Faruk Eminagaoglu, the founding president of the well-known association of judges and prosecutors, YAR-SAV. Members of that group have a reputation for a Kemalist-style ideology and for being affiliated with the opposition, namely the Republican People's Party (CHP). YAR-SAV and its founding president have been widely known for their hostility toward the ruling Justice and Development Party.

That is one reason the allegation didn't attract a lot of attention at first. Yet the former judge was persistent. Though the Higher Electoral Board ultimately rejected Eminagaoglu's appeal, the pro-Kurdish Peoples' Democratic Party (HDP) took up the matter.

The board chose to respond to the HDP, perhaps thinking it would silence those who might just be fishing for something to use against the president. The board recently sent the HDP a copy of Erdogan's supposed diploma, the one he presented when he ran in the August 2014 presidential elections.

With that, the controversy entered its second and probably more interesting and important phase: There are very strong arguments that the document might be forged, and that the college diploma of the president of Turkey might be a fake one.

There are very valid reasons to suspect the document's authenticity, as the copy indicates that Erdogan graduated from the Faculty of Economic and Administrative Sciences of Marmara University in 1981. At the bottom of the diploma, two signatures can be seen clearly: those of the university president and the dean of faculty.

That is very problematic, indeed. First of all, there was no Marmara University in 1981 and no such faculty under that name. Marmara University was founded in Istanbul in 1982. The faculty took that name and became affiliated with the school in 1983. Previously, it had been a college-level institution known as the Academy of Economic and Commercial Sciences.

So, how is it that Erdogan has a signed and dated university diploma, when there was no university or affiliated faculty under that name then?

That is why the HDP is pursuing the matter.

And from the other end of the political spectrum, anti-Kurdish, arch-Turkish nationalist Gokce Firat has presented detailed arguments that Erdogan's diploma is forged.

If taken seriously, the follow-up to the controversy could create monumental legal questions in Turkey. If it turns out Erdogan was never qualified to be elected president, whatever he has signed or implemented would have to be considered null and void from a purely legal point of view. Politically, it would provide an armory of ammunition to his critics, whose numbers abroad are rapidly increasing.

For example, in Germany, Erdogan recently riled Bundestag (parliament) members of Turkish descent. The Bundestag voted June 2 to recognize as genocide the 1915 Ottoman Turks' slayings of an estimated 1.5 million Armenians. Erdogan's response was to say that Green Party co-chair Cem Ozdemir's "blood should be tested" to verify that he actually is of Turkish descent. Ozdemir led the resolution on the Armenian genocide.

Ozdemir was the first of 11 Bundestag members of Turkish descent to be elected, and Erdogan's statement didn't sit well with the other 10 either. One of them, Sevim Dagdeviren, from the German Left Party, said Erdogan should be banned from entering Germany.

Erdogan's remarks may fall into the category of "racist discourse," which is considered a crime in Germany. I recently had the opportunity to talk to Ozdemir. He did not want to discuss the issue personally, because he does not want it to be interpreted as arising from a vendetta between him and Erdogan. However, there are enough German parliamentarians of ethnic Turkish background — and ethnic German parliamentarians in general — who could bring up an accusation of racism. And if Erdogan's university diploma proves to be a forgery, that would naturally provide ammunition to his international opponents to bring up the argument of whether his title is legitimate.

Raising the issue in Turkey is more difficult because the media is strongly controlled and thus muted to avoid irking the president.

Few people, including myself, took the questions about Erdogan's higher education seriously. It is mind-boggling. But if Erdogan's diploma ends up being a forgery, even Turkey's cowed media will not be able to ignore or avoid the explosive scandal that would result, with all its international dimensions.