As Turkey’s relations with the West continue to sour, President Recep Tayyip Erdogan is off to try his luck in Africa. 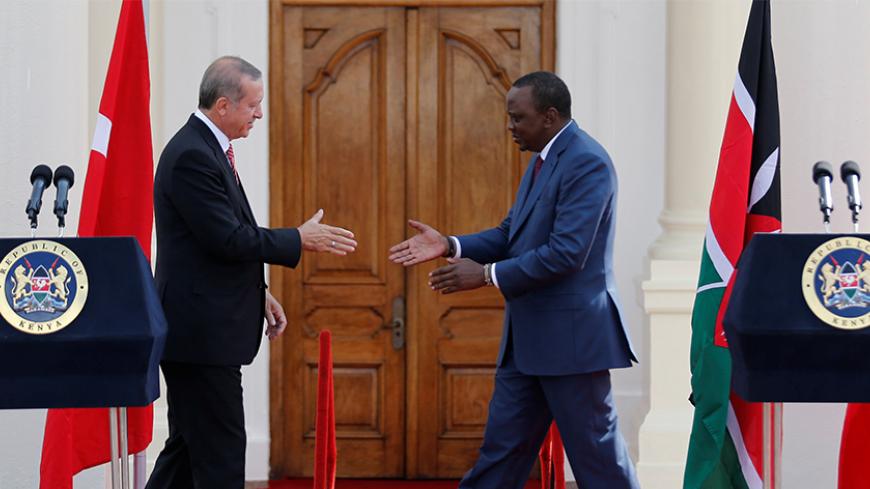 Turkish President Recep Tayyip Erdogan, who has become a leader nobody in the West is eager to host, has decided to steer toward countries with leaders he thinks might understand him: Uganda, Kenya and Somalia.

His government is trying to increase its foreign policy options and find new openings after upsetting all its neighbors with interventionist and aggressive policies. Of course, there is also an economic dimension to Turkey’s interest. As China, the United States and Iran are active in Africa, Turkey also thinks there are serious economic opportunities on that continent.

It's become a tradition for Erdogan to begin his foreign travels with much fanfare and overdone public relations campaigns. His four-day trip, which began June 1, was preceded by statements and articles that spoke of grandiose ambitions that made going to Africa sound like a conquest. His most repeated line was “Turkey has no colonial past,” as he portrayed Africa as an “exploited, oppressed, dark continent that is awaiting its savior.”

Yigit Bulut, a senior adviser to the president, in a recent appearance on TRT News actually uttered these words: “People in the Balkans, Africa, Central Asia and the Middle East are asking how they, too, can be governed from Istanbul.” According to him, people in Greece, Romania and Bulgaria are saying, “Never mind the European Union. What new scenario can develop with Turkey?” He is so removed from reality that if it weren't for gravity, he would be flying high.

In an article Erdogan wrote for Al Jazeera before embarking on his trip, he said that during this historical visit to Uganda, Kenya and Somalia he would encourage closer cooperation among regional allies, seek solutions to common problems and discover mutually beneficial opportunities. Erdogan said although many people in the world equate Africa with poverty, conflict and hopelessness, Turkish people don’t feel that way. “Turkey will be a friend, a compatriot and a partner of Africa,” he said.

Much was made of his hosts' politely welcoming gestures. For example, Ugandan President Yoweri Kaguta Museveni tweeted that Erdogan had turned Turkey into a developed country and Uganda should learn from it to achieve the same goal.

Museveni was being modest. He has accumulated vast and rich experience that could enlighten Erdogan on his path toward authoritarianism and lifelong presidency. Museveni has ruled Uganda for 30 years — the first 10 without elections. He won the February election amid accusations of fraud and suppressing the opposition. Another minor detail: He imprisoned the main opposition leader under the guise of maintaining stability.

We should not ignore Erdogan’s efforts to close the gap between Turkey and Uganda. Turkey is immediately behind Uganda on The Economist Intelligence Unit's latest Democracy Index, in which Turkey occupies the 97th slot. In the 2016 Press Freedom Index of Reporters Without Borders, however, Turkey lags far behind Uganda’s 102nd standing, at a dismal 151st.

Erdogan’s cohorts have called the first visit of a Turkish president to Uganda "a historic mission to restore the ties severed after Emin Pasha." In his joint press conference with Museveni, Erdogan said, “In those days, an Ottoman pasha named Mehmet Emin was serving in Uganda. Although his real profession was medicine, Emin Pasha also discovered hundreds of species of animals and plants and contributed significantly to the world of science. Emin Pasha was martyred in this land in 1892 by a tribe that was engaged in the slave trade in Congo. On this occasion, I respectfully pay homage to Emin Pasha, who had an important role in Turkey-Uganda brotherhood and left behind such a clean legacy.”

Actually, the pasha Erdogan gratefully remembered as a symbol of Turkey-Uganda brotherhood to his Ugandan audience was none other than the German-born Eduard Schnitzer, who had opted to serve the Ottoman pashas because his Jewish heritage had not allowed him to work as he wanted in his own land. In those years he entered the service of the governor of Egypt, worked with the British and as a colonialist agent and sold the animals, plants and historic objects he collected to European museums. He was killed by the anti-colonial Islamic Mahdi movement.

If there were any Africans who didn't smile bitterly at Erdogan's narrative, they aren't familiar with the history.

Leaving aside the public relations gimmicks, did such ambitious openings to Africa produce any worthwhile results? Turkey had declared 2005 as the Year of Africa to signal its openness to the continent. At that time, there were 12 Turkish embassies in Africa, a number that has since risen to 39. Turkey opened an embassy in Uganda's capital, Kampala, in 2010. Uganda opened its own embassy in Ankara in 2011.

How significant are these increases to Turkey? In 2015, trade with Africa accounted for less than 10% of Turkey's total of $184.7 billion. About 78% of that total, or $143.9 billion, was with Europe. These are modest numbers, but Turkey sees both Kenya and Uganda as major potential partners.

Erdogan also wants to add military dimensions to relations with Africa. After Turkey set up a base in Qatar, it is now establishing a base in Somalia to train 10,000 Somali soldiers.

A prominent Turkish businessman who did not want to be identified made this assessment to Al-Monitor: “Erdogan’s African opening is an external reflection of the struggle with the Gulen movement. The Gulen movement is quite powerful in Uganda and Kenya. Erdogan wants to break that apart. Sure, Uganda has major economic potentials. Because of its rich gold and oil reserves, China and the United States are in competition there. Furthermore, it is one of the most stable countries of the region.” Uganda plans to start exploring its oil in 2017.

Turkey has made significant strides in its soft-power approach to the continent. The official Cooperation and Development Agency of Turkey has been active in Uganda and other African countries. Several major Turkish nongovernmental organizations (NGO) have expanded Turkey’s sphere of influence, among them is “Is Anybody There,” an NGO linked to the Gulen movement. Erdogan's Justice and Development Party government is now after it.