Near Damascus, watch out for missiles, shelling and speeding tickets

In a visit to Damascus, Al-Monitor spoke with Syrian officials about the latest developments happening in Syria. 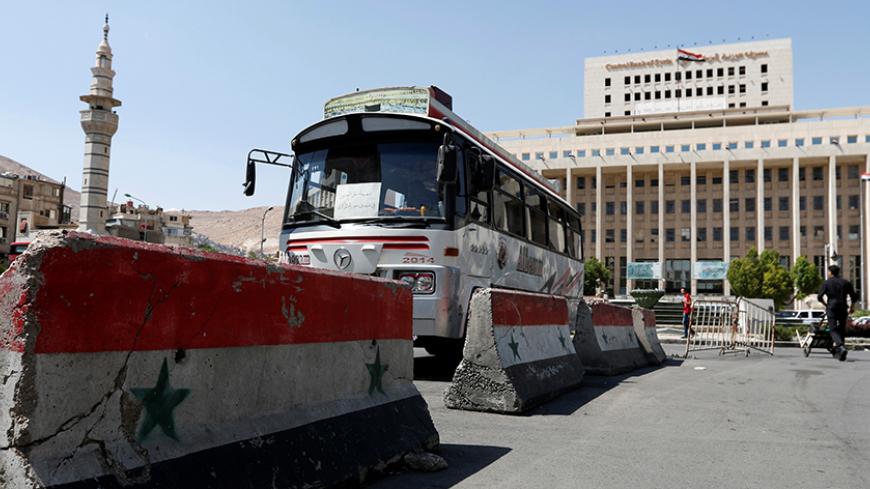 A bus drives past concrete blocks painted with the Syrian flag near the Central Bank of Syria in Damascus, May 31, 2016. - REUTERS/Omar Sanadiki

For the first time since the Syrian military intervention in Lebanon in 1976, a civilian at the Syrian Jdeidet Yabous border crossing can note the presence of Lebanese politicians going to Damascus. For 40 years, Syrian authorities designated a special line at the crossing for prominent Lebanese figures who are friends of the regime. This was known as the “military line.”

Over all those years, those lucky ones, such as ministers, parliamentarians, politicians, party leaders and figures close to Syrian officials, were given recommendation cards to use this special line and avoid the hassle of standing at Syrian General Security centers or waiting for entry and exit papers. This was the case right up through late May.

However, the scene was different June 1, as several Lebanese politicians took the “civilian line.” A Syrian taxi driver told Al-Monitor, “A new measure was introduced by the Syrians a few days ago. The military line is now completely closed, and it has become imperative for everyone to take the formal crossing without exception.”

In Damascus, life seems almost normal. Even the staccato bursts of missile and artillery shells have become quite common for Damascenes.

Al-Monitor visited a Syrian parliament member, who insisted on remaining anonymous, at his house in Damascus to discuss the latest developments in Syria. Al-Monitor’s first question was about the nearby sound of missiles. With a smile, the host confirmed that the sound was coming from Daraya, a suburb only 5 miles away. "People have become accustomed to such sounds. They can even know if a missile is falling down or being launched. These sounds have stopped affecting them.”

He added, “Our military [the Syrian regime army] has made a series of … incursions on several fronts in Ghouta," another nearby suburban area. "The Syrian army and its allies are dealing fatal blows to the opposition gunmen. But the Syrian authorities in Damascus are dealing with the front under advisement, as the decision-making process is now subject to certain priorities. Where shall we strike and where shall we restore the land?” He did not mention what priorities he was referring to.

This pushes one to question whether these priorities are subject to the so-called concept of “useful Syria,” whose idea is that Syrian authorities seek to liberate the most desirable parts of Syrian territory, in the west, while overlooking the fact that other areas are still controlled by gunmen. The Syrian parliamentarian, who is very close to the decision-making circles in Damascus, said this was not true.

“We are determined to restore the Syrian territory entirely. Our troops are still in Deir ez-Zor [in the east] to date and this is sufficient evidence. The battle has moved to Raqqa now. But around Damascus, we are keen to reduce [the numbers of] our army and we want to start with the liberation of areas that are more strategic than others.”

On the way to the office of a Syrian government official, Al-Monitor asked the parliament member about the disappearance of the "military line" at the border. "It was closed based on the direct instructions of the presidential palace," he replied. "New measures have been taken since the identification of the people behind the series of bombings that hit the Syrian coast in Tartus on May 23. One of the terrorists had a recommendation card from a Lebanese politician close to Damascus to take the military line."

Asked if this means that a security breach took place, he rushed to say that the issue was "individual and limited."

"But the seriousness of the crime led to the issuance of the new regulations. What happened is not normal. The media reported more than 100 people killed in the Tartus bombings, but there is talk among Syrian officials about 400 people dead and twice as many wounded,” he said.

At the office of the Syrian government official, who also requested that his name not be mentioned, the discussion went directly to political issues. The official briefly summarized the Syrian situation by saying, “We have gone beyond the stage of discussing the fate of the regime or tackling the regime members. Today, we are [in] a battle to define the regime’s form, its work mechanisms and its way of dealing with the Syrian people and with Syria [itself]. Some are speaking of a federation and a decentralized system, among other forms, like Kurds, Russians and even [President] Bashar al-Assad himself. This is what is being discussed today. The rest is behind us.”

Regarding the leak of the so-called Russian draft of a new Syrian Constitution, the Syrian government official did not deny the existence of such a draft. “We have made some comments on this draft. The pluralism mentioned therein is secured under the local administration law in Syria and is therefore constitutionally guaranteed. Therefore, there is no need for any [changes] in this regard,” he added.

It is noteworthy that the draft constitution prepared by Russia was leaked May 24 and received negative criticism from many Syrian journalists. This pushed Syrian authorities to issue official denials. But the official who met with Al-Monitor did not deny that there is a draft.

As to whether the Russian draft was made in coordination with the Iranians, or whether the competition between Moscow and Tehran over their role in Damascus became evident, the official replied, “There is no competition at all. There may be some misunderstandings or poor coordination at times — like when the Russians and the Americans declared a truce in February and the Iranians were not aware of it — but the three of us have met and discussed things. We [Syrians] have full confidence in both allies [Iran and Russia]. Therefore, we are facilitating the relationship between the two and giving them all the information we have. There is no problem at all at this level.”

To a question about what is impeding an actual solution, he answered, “I think the only problem remaining is with Turkey, depending on what Ankara's leaders want and the influence they aspire to have, be it in Syria, Iraq or elsewhere. For their part, the Saudi and Qatari risks in terms of armament and financing of [the opposition] have dramatically receded. The only threat remaining is [Turkish President Recep Tayyip] Erdogan, who is still playing with fire in neighboring [countries]. But we are aware that he is as much of a problem for Washington and Moscow as he is for us, so we are reassured,” the government official replied.

At the door of his office, the official remembered a critical point. He said, “The Syrian pound exchange rate to the US dollar fell by about 30% today [June 4], as our monetary authorities do not intervene in the exchange market. This is a very positive sign.”

The improvement of the Syrian pound exchange rate increases its purchasing power for Syrians living in Syria, as it leads to a price decrease and an upgrade in living conditions.

On my way back from Damascus to Beirut, I saw a Syrian policeman running radar under the hot sun along the desert road. The surrounding areas are controlled by armed terrorists, yet the policeman was issuing tickets to drivers speeding to or from Damascus to escape an ambush or shooting.

This was such a surreal scene, but at the same time it showed that the Syrian state is still functional at some level.