Moscow has allegedly opened up channels of communication between the Syrian regime and Saudi Arabia, and many are speculating whether this will cripple the Syrian opposition forces’ capabilities. 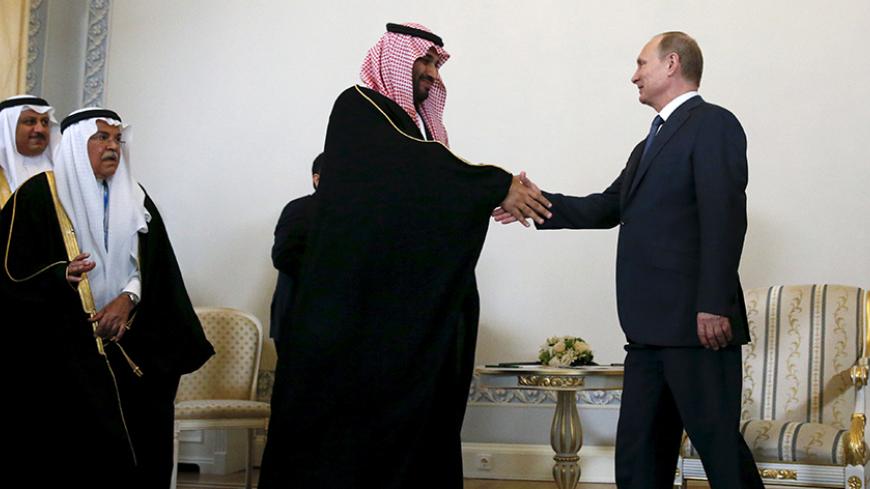 BEIRUT — When traveling from Beirut to Damascus these days, two things are noticeable: a decrease in the number of military checkpoints from the Lebanon-Syria border all the way to the Syrian capital, and the many posters glued to electricity poles along the roads that call on the Syrian youths to join the army, claiming, “You are the only ones that can bring us together.” There might not be a logical correlation between these two observations, but they seem like a fitting prelude to Al-Monitor’s interview with a Syrian government official on the situation in his country and the latest developments of the conflict there.

The Syrian official, who spoke on condition of anonymity, told Al-Monitor that the decrease in the number of military checkpoints is due to the Syrian authorities’ relative confidence with the military and security situation in Damascus and its surroundings, stretching all the way to the Lebanese border. Before the official elaborated on this, he provided a quick reading of the reasons behind the Syrian government's stance.

He told Al-Monitor, “In the past few weeks, there hasn’t been a drastic change in the number of soldiers and equipment. Nevertheless, our armed forces have lately made significant advancements on several fronts — in Zabadani in eastern Damascus, Palmyra in the north and all the way to Hasakah and Qamishli on the Iraqi border. Our capabilities did not increase, meaning those of the gunmen have decreased. This is certainly a result of political pressure — those that have given them weapons, equipment, ammunition and money have either decreased or stopped [giving aid]. This is the only logical explanation given the information at hand.”

Al-Monitor then asked if he meant that this is the preliminary result of the communications between Syria and Saudi Arabia. The Syrian official smiled and neither confirmed nor denied the news about possible communications. He said, “Saudi Deputy Crown Prince and Minister of Defense Mohammed bin Salman visited Russia in mid-June. Our Russian friends told us that the meeting between the Saudi official and Russian President Vladimir Putin started with the Saudi side addressing the economic and investment cooperation [between the two countries], as well as other general issues. Yet Putin was quick to discuss the issue of terrorism. Putin told his Saudi guest that Moscow was also interested in confronting extremism and terrorist acts. Salman replied that the kingdom is aware of the challenges facing Russia in Ukraine, the Caucasus and other areas in Asia [under its control]. Putin, however, frankly replied that this wasn't what he was referring to, but rather the terrorism that is coming from Syria in particular, which is significant and the most dangerous.”

The Syrian official said that at present, the path of the Saudi-Russian negotiations has completely changed. The young Saudi prince seemed ready to listen to his host, and was even responsive to what he said. “Putin presented his interpretation of the 4½-year Syrian crisis. He stressed that the result is set — neither of the two conflicting parties will be able to eliminate the other. At this time, terrorist movements are the sole beneficiaries, and all countries concerned with the Syrian crisis are affected by terrorism on their own territories, including — if not in particular — Saudi Arabia itself. The Saudi official asked his host about his suggestions. Putin immediately answered that he suggests a new alliance to fight the Islamic State [IS] and terrorist movements, starting from Syria, and that this alliance shall include Riyadh and Damascus, if it is to be effective,” the official said.

The Syrian government official reiterated that the Saudi prince was neither surprised nor hesitant with Putin’s suggestion. Salman told his host that Saudi Arabia is ready to discuss the matter. Yet, Salman added that such an alliance should be multilateral, and should include coordination with the forces neighboring Syria, as well as coordination with the US-led coalition against IS and terrorist movements. Putin agreed with the Saudi guest’s opinion, the Syrian official said, and added that he is ready to feel the pulse of these international parties and discuss the matter with them. According to the official, Salman suggested that Moscow discusses the Syrian issue with the Syrian opposition parties, and that Putin has agreed to do so.

The Syrian official said that the Russian lines of communication had been active on more than one front. Russian Deputy Foreign Minister Mikhail Bogdanov went to Turkey June 25, where he met with a Syrian opposition delegation and Turkish officials. Yet, the outcomes of these meetings were not encouraging, according to the official. Moscow has, however, continued its communications. A few days later, Syrian Foreign Minister Walid Moallem went to the Russian capital at the invitation of Russian officials to discuss what had been achieved with Salman. In the meeting between Putin and Moallem June 29, it was surprising that Putin announced an initiative to establish a coalition against terrorism that includes Syria, Saudi Arabia, Turkey and Jordan. Following this visit, Saudi-Syrian channels of communication were indirectly activated through Moscow, in preparation for the main meeting with Maj. Gen. Ali Mamlouk, head of the Syrian National Security Bureau and main figure of the Syrian regime, who, according to Saudi sources, flew on a Russian airplane to Riyadh July 7, to meet with Prince Salman.

Following this milestone, appointments and conferences intensified, and communications and initiatives started to manifest themselves, from Doha to Tehran.