Will European ambassadors return to Syria?

According to one Syrian official, European ambassadors might be returning to resume their functions in Syria, as the West has started to realize that the Syrian army is the only one able to fight terrorism. 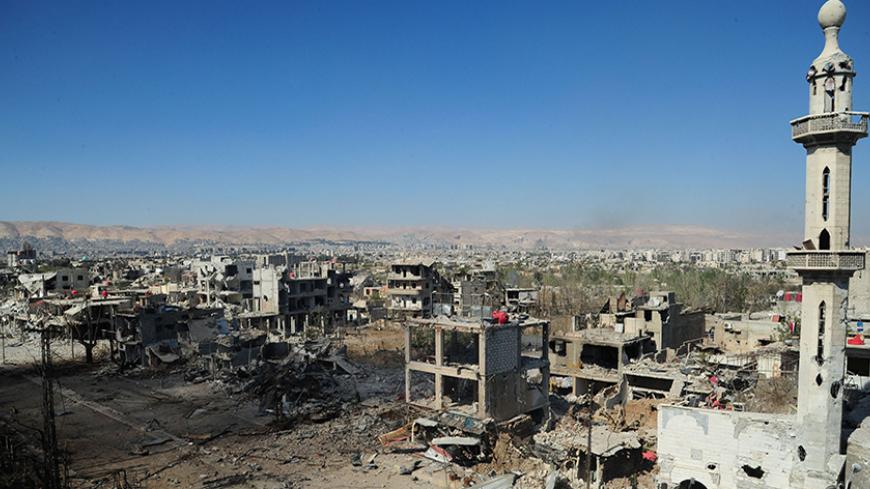 A view shows a part of the al-Dukhaneya neighborhood near Damascus after soldiers loyal to Syria's President Bashar al-Assad took control of it from rebel fighters, Oct. 6, 2014, - REUTERS/SANA

DAMASCUS, Syria — One cannot help but smile at the sight of a Syrian traffic policeman standing behind his radar gun, looking for violators of the speed limit indicated on the new sign on the side of the Beirut-Damascus highway.

That smile might become even broader when the driver taking you from Beirut to Damascus says that you are passing through the city of al-Zabadani, where armed opposition militants are stationed on both sides of the road, even if Syrian army units have managed to push them a few meters away from it. The first idea that crosses your mind is to ask the driver to speed up, because you couldn't care less about the policeman who is registering the plate numbers of the cars exceeding the speed limit!

Perhaps the speed radar has been carefully and deliberately placed there to detect the speed of cars, a few minutes after they enter Syrian territory. It is the best way to convey the message that the Syrian state is doing well and that you are entering the scope of a fully sovereign state, regardless of the turn of events that have marked the past 3½ years.

Before you cross the Masnaa border crossing, you discover that for the first time since the outbreak of the Syrian war, the decision of the Lebanese authorities to stop the influx of Syrians into Lebanon is relatively serious.

You do not see the long lines of Syrians waiting to enter Lebanese territory. One of the soldiers tasked with completing the entry and exit paperwork told Al-Monitor that the authorities’ decision to ban Syrians from entering is being strictly and fully applied.

No Syrian refugees are allowed in, except for the most exceptional humanitarian cases. Moreover, some of them were registered in Lebanon as refugees but it turned out that they had returned to Syria in their normal capacity as citizens and were now trying to re-enter. These people are denied entry as well, since they are clearly not actual refugees and are trying to benefit from the aid and relief provided by international bodies to Syrian refugees in Lebanon, who number more than 1 million.

According to the soldier, seasonal construction workers who have been moving between Syria and Lebanon for years have also come under police scrutiny and tight measures outside security offices, on the roads and in parking lots. There has been talk that the corruption of certain security officers is the only thing preventing fuller adoption of these measures.

Between the Lebanese Masnaa border crossing and the Syrian border in the village of Jdeidat Yabous, it was clear that the number of security checkpoints has decreased. Only five checkpoints separate you from the capital. Today, cars are only thoroughly searched at the 4th Armored Division checkpoint.

Maher al-Assad, Bashar’s brother, is the commander of this division, which is an elite formation of the Syrian army. On the Mezzeh highway, the traffic jam begins, which is further exacerbated by minivans and buses dotting the road like swarms of ants. This phenomenon is known as the “microbus,” which makes movement on the streets of Damascus an adventure, amid the ineptness of drivers and the traffic chaos. Meanwhile, the state’s influence is absent and road violations are increasing.

I arrived a few minutes late to a Syrian official's office. He was understanding and received me with a wide smile, and asked if the delay was due to the situation on the Lebanese side of the border, where military and security tension has been escalating between the Lebanese army and terrorist militants in the past few days. I swiftly replied, “No, it is because of all the roadwork in Damascus, from the border until Mezzeh.”

He laughed joyfully and said, “We are paving the roads for the return of those who left. In the past two weeks, we have received five European ambassadors coming from Beirut, as their countries closed their embassies in Damascus. They came for the first time [since the closing] to check on their embassies’ headquarters, to get informed of the work of the missions that are entrusted with the affairs of their nationals in Syria. They are likely preparing to return, which I expect to happen in the beginning of the new year. Thus, we are paving the roads for them.”

His comments were enough to start talking politics. The office of the Syrian official is close to al-Rawda Presidential Palace in the heart of Damascus. “So Europeans are coming back?” I asked.

“Of course. Recently, they have tried to open channels of communication with us. We informed them that any security cooperation with them must be preceded by political communications. They were hesitant at first, but what happened with the Islamic State [IS] has changed many facts on the ground. Today, they are making security and political overtures to us.”

“But you are technically outside the international coalition against IS and its likes, as stated in the UN Security Council Resolution No. 2170,” I said.

“It is a matter of formality," he replied. “They are well aware that we are the only army able to fight terrorists in the entire region. In Iraq, there is no [official] army so far. They are training militias to confront terrorists. In Turkey, there is great complicity between the authorities and terrorists. The statement of [US Vice President] Joe Biden said it all. So, who is left to counter terrorism? The Syrian army has been fighting this battle on its own for the past four years. Westerners are well aware of this. They are looking for possible ways to deal with and adjust to the situation.”

He took a deep breath before adding, clearly at ease, “Terrorism cannot be eradicated from the air. Eliminating terrorism ought to be done by striking it at two main levels: on the ground and at the level of thought. Who is capable of doing so today? This is the key question we pose to the West and the international community. This is what we are qualified to do, intellectually and militarily. How do we do it? This is a matter that requires further elaboration and details.”