Can Saudis tempt Moscow into pushing Iran from Syria?

Saudi Arabia has given up on ousting President Bashar al-Assad and is now hoping to convince Russia to deny Iran a presence in Syria. 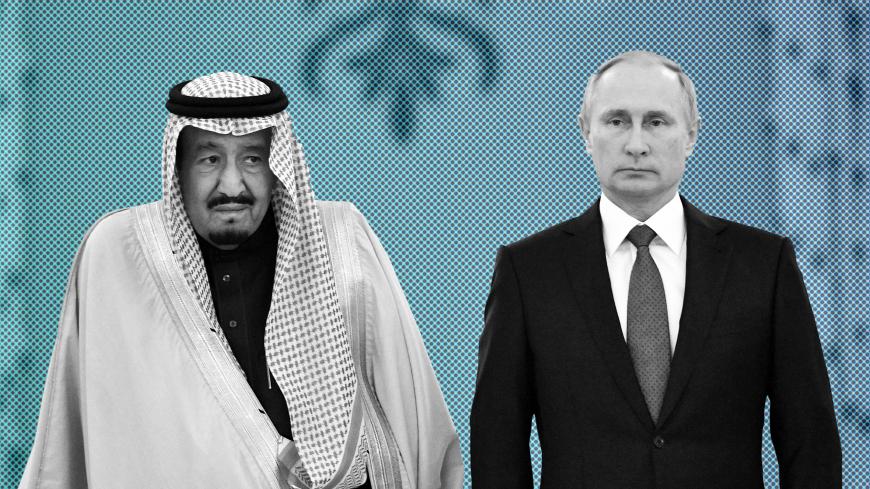 Russian President Vladimir Putin (R) and Saudi Arabia's King Salman attend a welcoming ceremony ahead of their talks in the Kremlin in Moscow, Oct. 5, 2017. - Sputnik/Alexei Nikolsky/Kremlin via REUTERS 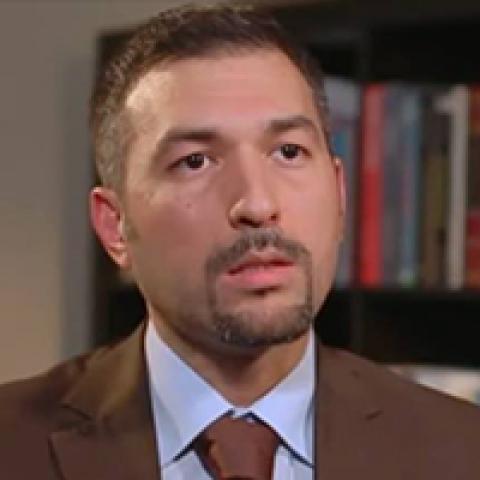 Saudi Arabia hosted a conference on Nov. 22 for the Syrian opposition aimed at unifying its position ahead of the UN-backed Geneva 8 talks. At the conclusion of what became known as the Riyadh 2 meeting, the participants stressed, “[The transition in Syria] cannot happen without the departure of Bashar al-Assad and his clique of repression and tyranny at the start of the interim period.”

In contrast, however, the statement by Saudi Foreign Minister Adel al-Jubeir was softer, referencing “consensus” and avoiding mention of Assad or anything related to his fate. Jubeir told the representative of the Syrian opposition, “There is no solution to the crisis without a Syrian consensus that would achieve the demands of the Syrian people on the basis of Geneva 1 and [UN Security Council Resolution] 2254.”

Prior to that meeting, on Nov. 19, Alexander Lavrentiev, Russia's special presidential envoy for Syria, had met with Saudi Crown Prince Mohammad bin Salman to discuss the Syria file. Lavrentiev attended Riyadh 2 to follow up on the outcomes. After the conference, Russian Foreign Minister Sergey Lavrov asserted, “Russia is working together with Saudi Arabia to unify the Syrian opposition.”

Why are Riyadh and Moscow working together on the Syria file, and how does it serve both their interests?

In February 2016, Saudi Arabia asserted that Assad would be removed from power by force despite Russia's strong military support for him. In contrast, two months later, US officials revealed that President Barack Obama had vetoed 50 plans prepared by the CIA to remove Assad from power. The fight for Aleppo at the end of 2016 was the turning point for the Saudis. In the aftermath of the regime taking the city, Riyadh realized that removing Assad from power had become impossible. Its role in Syria declined rapidly and significantly, as it was no longer on the ground, with rebel forces having suffered a major defeat. The Saudis stopped demanding Assad's immediate removal from power and criticizing Russia's military operations.

January 2017 brought the Astana talks — an initiative proposed by Russia and Turkey, and later joined by Iran — to conduct peace talks on Syria. Saudi Arabia did not participate in the seven rounds of talks held thus far. Despite this, the kingdom still hoped to stay in the game through the High Negotiations Committee, created in Riyadh in December 2015 to represent the Syrian opposition at the UN-backed Geneva talks with the Assad regime.

Furthermore, in March 2017, the sixth anniversary of the Syrian civil war, the United States openly acknowledged that ousting Assad was not on its to-do list. Thus, Riyadh’s ability to shape Syria-related events became extremely limited, if not non-existent. Saudi leaders were therefore left relying on Washington and Moscow to to stay in the game, but how?

Moscow’s efforts to reach a sustainable political solution in Syria lack one crucial component: legitimacy. Without it, no matter what Russia, Iran and Turkey achieved through the Astana process, the result would be fragile. Because of this, Moscow perceived the need to make progress in the Geneva talks toward its preferred trajectory and to force the Syrian opposition to recognize Assad. The goal is then to move the outcomes of these two steps to the Astana track and the “Syrian People’s Congress,” tentatively scheduled to be held in January or February 2018 in Sochi. This cannot be done without weakening the Syrian opposition, and this is where the Saudis come in.

A high-level Syrian opposition figure requesting anonymity and who attended the High Negotiations Committee's meeting with Jubeir on Aug. 3 confirmed to Al-Monitor that Jubeir had said, “Facts on the ground have changed. … Assad will stay in power, at least till the end of the transitional period. … That is why you should prepare yourself [for the Riyadh 2 meeting] in order to cope with these changes.”

The Saudi Foreign Ministry denies that Jubeir made such a statement. Yet, Mustafa Alani, head of the Defense and Security Department at the Gulf Research Center — a Saudi think tank headed by Abdulaziz Sager, whom the Saudis commissioned to manage the Riyadh 1 meeting in 2015 — was reported as saying of the Saudis, “The regime is no longer an issue. Even the president [Assad] is no longer an issue. The problem is the question of Iranians on the ground.” They are now arguing, he said. “The Russians should work to end the presence of Iran in Syria.”

Al-Monitor has learned that this approach was actually approved in the first half of 2017. Mohammad bin Salman himself told some of his foreign guests about it. Accordingly, Saudi Arabia would try to convince Russia to push Iran and its militia out of Syria. In return, Riyadh would seek to advance economic, investment and energy relations with Moscow to unprecedented levels, in addition to restructuring the Syrian opposition to offset the hawks and allow figures close to Moscow and Cairo to join it.

A source with direct knowledge of the situation who requested anonymity, because he is not authorized to speak to the media, told Al-Monitor, “[Mohammad bin Salman] himself decided that Saudi Arabia should work with Russia to push Iran out of Syria. In return, [Riyadh] would seek an advanced economic partnership with Russia and help stabilize the Assad regime if he agrees to distance himself from Iran.” He added, “Riyadh 2 was part of the plan, and so was the visits of the crown prince and the king to Russia.”

Indeed, on May 30, 2017, Mohammad bin Salman met Russian President Vladimir Putin, and they agreed to enhance cooperation on energy and to narrow the gap between them on the Syrian conflict. “We have a lot of common ground. As far as our disagreements are concerned, we have a clear mechanism of how to overcome them. We are moving forward quickly and in a positive way,” Mohammad bin Salman said.

Five months later, King Salman headed to Russia. Lavrov described the event as a “historical moment,” while Putin dubbed it a “landmark event.” Majed al-Turki, head of the Center for Media and Arab-Russian Studies in Saudi Arabia, told Al-Monitor, “Areas of understanding between the kingdom and Russia, particularly regarding Syria and the Iranian influence, increased after King Salman’s recent visit to Moscow.” He also said, “Pro-Iran militias in Syria are a problem now and will be in the future. There is a common interest when it comes to trimming Iran’s claws in the region, and this is also compatible with what the US wants.”

On Nov. 10 the BBC, citing a Western intelligence source, reported, “Iran is establishing a permanent military base inside Syria.” Furthermore, in a Nov. 25 telephone call with Assad, Iranian President Hassan Rouhani was reported as saying, “Iran is ready to play an active role in reconstruction of Syria [in the post-war period].” In short, that means Assad can ignore Western conditions, and Iran plans to stay in Syria.

Russia will have a hard time with Iran in regard to the Shiite militias in Syria and Tehran’s influence on Assad, as the two could gain the upper hand in the postwar period, when Moscow’s support for Assad will not be as valuable as it is right now.

Some argue that the future of Saudi-Russian relations is not promising. It is difficult to conceive that Russia would ditch Iran for the less reliable Saudi Arabia. For the moment, Moscow seems to be avoiding a direct clash with any of the crucial players in Syria, so it can utilize their efforts to its benefits. The case of Saudi Arabia appears to fall into this category. Whether Russia will eventually meet the Saudis' expectations in Syria is an unknown. 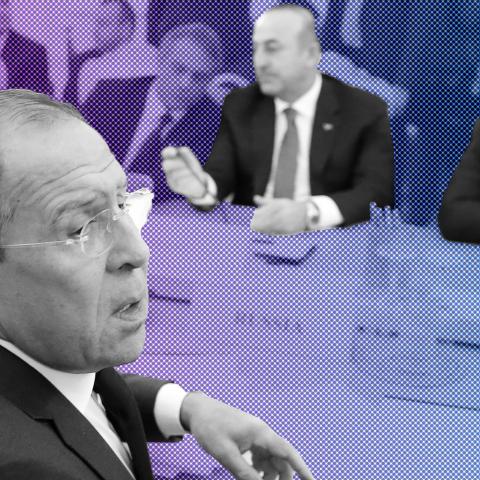 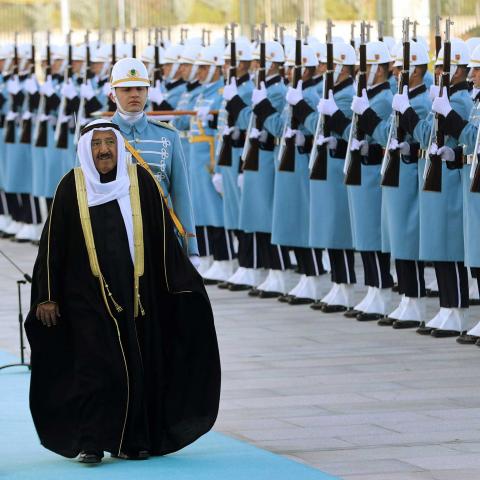