Mistrust and differing objectives continue to mar Iran-Russia relations, even as the two countries move forward on Syria. 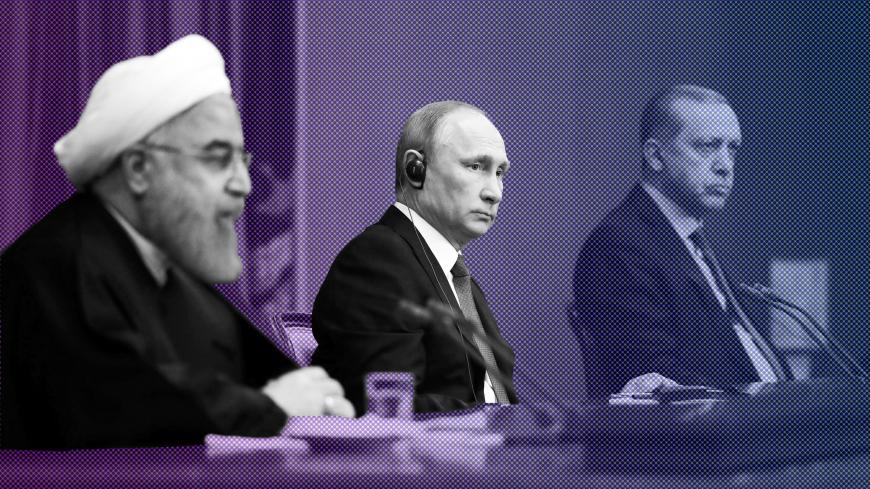 TEHRAN, Iran — The Russian Black Sea resort city of Sochi, widely known for its tourist attractions, has recently turned into a diplomatic hub, with dialogue over the Syrian crisis now serving as its main international attraction. On Nov. 22, the presidents of Russia, Iran and Turkey attended a trilateral summit in Sochi to coordinate their efforts on the future of Syria. Just a day before, Russian President Vladimir Putin hosted his Syrian counterpart Bashar al-Assad in the resort, with his warm welcome catching the eyes of the media. Moscow has also declared its plans to host a national Syrian congress in Sochi, consisting of different Syrian factions, to discuss the political process as well as a new constitution for the country.

In a broader perspective, it could be said that with an eye to post-war Syria, the Russians are trying to play the main role on the Syrian stage.

First and foremost, by initiating various meetings with their partners in the Astana process, namely Iran and Turkey, and at the same time underlining the importance of Iran and Russia’s military support for the Syrian government in shaping developments on the ground, the Russians want to be recognized as the main pillar of military success over the Islamic State (IS) and other terrorists. Moscow’s frequent criticism of the US-led anti-IS coalition, accusing it of not being serious in fighting terrorism, could be interpreted in the same vein. In other words, Russia is trying to say that without its efforts there would be no end in sight to the rule of the United States, nor would it be possible to forge a compromise between Iran and Turkey’s military plans in Syria.

The delicate point here, however, is that by continuing to be active in both the Geneva and the Astana tracks, Moscow is effectively the only link between the two different sets of actors involved in the Syrian conflict.

Second, Moscow has frequently insisted that it sees the Astana track as complementary to the UN-mediated Geneva peace process and not as an alternative. As the Director General of the Russian International Affairs Council Andrey Kortunov puts it, “If in Astana there was a team that extinguished the fire of the Syrian war, then in Geneva there will be designers and engineers to restore the building of the Syrian state.” The delicate point here, however, is that by continuing to be active in both the Geneva and the Astana tracks, Moscow is effectively the only link between the two different sets of actors involved in the Syrian conflict.

Third, by proposing its initiative for the national Syrian congress, Moscow is also seeking to have final say in the domestic equations in Syria during the transitional period ahead. While some hurdles, such as Turkey’s objection to the inclusion of Syrian Kurdish groups in the political process as well as the hard-line stances of some opposition groups regarding the role of Assad and his government in the future of Syria, have forced Moscow to delay the congress, Russia’s actions show a willingness to act as a mediator between different Syrian factions.

The key question here is, how do Moscow’s partners in the Astana process see their current multilayered Syrian policy?

As far as Iran is concerned, it seems that the final joint statement of the Sochi summit addresses some of its main concerns regarding the future of Syria. The statement underlines the necessity of preserving Syria’s unity and territorial integrity, without raising any preconditions for the start of the transitional period. The fact that Turkey was a signatory to the declaration without any further insistence on Assad’s removal was another success for Iran.

But this does not mean that Iran feels wholly safe in the face of Russia’s plans. First of all, Tehran sees Moscow’s desire to consider the Geneva track as an integral part of the political process as a challenge to its long-term interests in Syria. In fact, from an Iranian point of view, the Geneva process was primarily designed to sideline the role of Iran and its allied forces in Syria, and it was solely Iran’s active fight against terrorism in Syria that forced other actors to accept its role and interests, at least temporarily. So, any revalidation of the goals of the Geneva track could pose a direct threat against Iran’s interests. In fact, during the recent trilateral presidential summit in Sochi, it was only Putin who clearly spoke of the necessity of following up the Geneva process, while Iran’s President Hassan Rouhani’s main emphasis was on the need for Syria’s future to be decided by the Syrian people.

Iran’s second concern is related to Russia’s policy of working with everyone involved in the Syrian crisis. For instance, after his meeting with Assad, Putin held separate phone calls with US President Donald Trump, Saudi King Salman bin Abdul-Aziz Al Saud, Egyptian President Abdel Fattah al-Sisi and Israeli Prime Minister Benjamin Netanyahu to brief them on the results of the Sochi summit. There is no doubt that Iran sees the American, Saudi and Israeli plans for Syria as opposed to its core interests and, therefore, is worried about the substance of any Russian agreement with these actors.

The joint statement issued by the presidents of Russia and the United States on the sidelines of the recent APEC summit in Vietnam, which entailed some hints about the exit of foreign troops in Syria, is a good example in this regard. Although it’s highly unlikely that Russia will put direct pressure on Iran to force it out of Syria, Moscow may not find particular issues with defining Lebanese Hezbollah or other pro-Iran forces in Syria as “foreign troops,” which could, in turn, weaken Iran’s position in the country.

Finally, although the three presidents in Sochi insisted on the necessity of holding the national Syrian congress, it is, in fact, Moscow that will have the main role in the endeavor. In this vein, what Russia sees as legitimate opposition forces, invited to attend the congress, may not necessarily match Iran’s viewpoint. In fact, during the six years of the Syrian conflict, Russia has tried to establish ties with various Syrian groups and factions, some of which Iran deems radicals or even terrorists. The case of Ahrar al-Sham is an example of such a difference of opinion.

Thus, although the Sochi summit was widely interpreted as a sign of the three countries’ willingness to coordinate their efforts on post-war Syria, Moscow’s attempt to centralize the political process around its own role could potentially alienate Iran down the road, thereby challenging their so-far-successful partnership in Syria.