A group of young Syrians has been documenting and exposing violations and other activities by Jabhat al-Nusra in Syria. 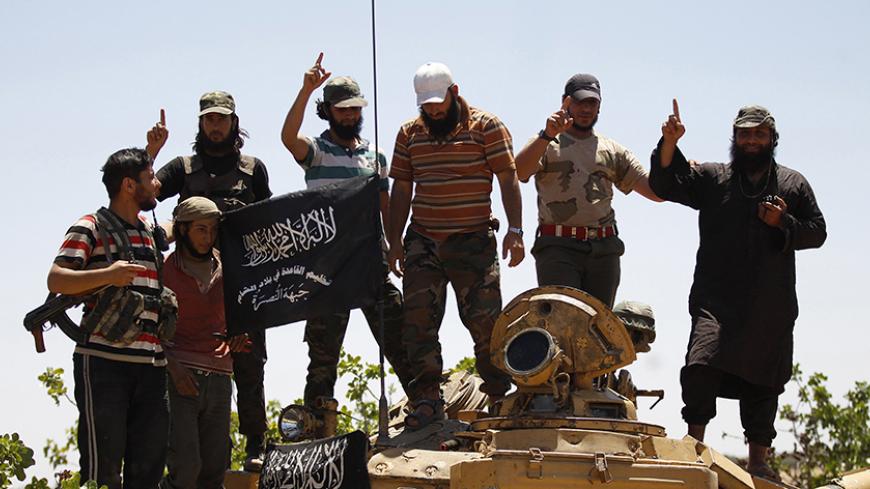 When Jabhat al-Nusra’s influence began to grow in northern Syria in general in early 2014, and in the city of Idlib in particular, a number of clandestine groups secretly set out to document and publish the militant group's attacks on journalists and activists. This led in January 2015 to the launch of the Jabhat Nusra Violations campaign, primarily undertaken by young people from Idlib province who had been arrested in or displaced from areas under the group's control. One of the campaign founders, Assem Zeidan, met with Al-Monitor in Gaziantep, Turkey, to discuss the effort he described as aimed at resisting Jabhat al-Nusra intellectually and humanistically through civilian and legal means.

“As a result of Jabhat al-Nusra expanding the scope of its attacks against civilians, journalists and Free Syrian Army [FSA] factions, the need arose for a campaign to document these actions and record associated names and dates through all possible legal means,” Zeidan explained. “Toward that end, a group was formed consisting of young people living outside of Syria, who can easily move about and are not located in areas controlled by al-Nusra.”

Campaign members, who now number about 25 in Syria and abroad, conduct activities clandestinely, such as distributing outreach posters and tagging walls with graffiti in Idlib city and the countryside. They also conduct surveillance on Jabhat al-Nusra’s daily activities against the Syrian populace, such as taking photos of the execution of a woman or the arrest of a journalist, using a hidden camera to document the group's actions. No one would dare to openly film such for fear of being accused of opposing Jabhat al-Nusra, which, more often than not, is punishable by death.

“The goal of these campaigns is to educate people about the dangers of al-Qaeda’s ideology — as al-Nusra pledged allegiance to al-Qaeda on April 10, 2013 — and distance them from it as far as possible,” said Zeidan. “This is although we know the risks associated with such activities, as most of the activists arrested are not charged with any crimes, but apprehended as revenge for shunning Nusra’s actions. People are often arrested because of critical Facebook posts or as a result of press statements that contradict Jabhat al-Nusra’s policies. For those reasons, we decided that the main core of campaign activists be located outside Syrian territory, supplemented by some on the inside, who, for their safety, are given pseudonyms, and with whom we communicate using encrypted information exchanges.”

Despite the group's security measures, campaign members still get arrested. Some apprehended in Idlib were later released as a result of mediation by influential people in the area or the payment of ransoms by family and friends. Some remain detained, awaiting an unknown fate in light of the absence of anything resembling a fair trial.

The campaign is particularly active on social networking sites, such as Facebook and Twitter, where Jabhat al-Nusra members vehemently attack campaign members. This has led to the closure of a number of the extremist group's pages on those sites and loss of information and followers on social media.

Jabhat Nusra Violations began in early 2015 with three people coordinating intermittent posts on social media about daily events in Jabhat al-Nusra-controlled territory. These areas were under media blackouts, and even media outlets that were allowed to operate there, like the Orient TV, were under Jabhat al-Nusra’s control and could only report about the movement’s advances against the regime. Daily field reports that ignored rights violations by the group or otherwise did not put the group in a bad light were also permitted.

Less than a month after Jabhat Nusra Violations​ was launched, however, messages began to appear on the pages of the campaign website from untraceable accounts providing alleged details about arrests by the movement and its breaches against citizens. “At first, we were careful, because we did not know the accounts or their admins,” said Zeidan. “But we would check the news from friends inside to see if they were true. The photos were taken through hidden cameras on the field. This is how trust was built, and we organized ourselves under one group. We are currently close to being a proper media and documentation organization.”

Zeidan further stated, “The members of the campaign are chosen by the founders based on recommendations from current members to make sure that it is safe to have them on board and that they really are against Jabhat al-Nusra, not spies for them. We also work to restrict our external relations with the media and individuals to a minimum of campaign members to avoid disclosing the identity of the remaining ones.”

“Each time we ask for funding from the supportive organizations, our demand is refused for different reasons, sometimes because such projects are not supported and other times for vague reasons,” Zeidan explained. “But, we know the real reason is the unwillingness to support activities that might anger Jabhat al-Nusra and endanger other organizations in Syria.”

Jabhat Nusra Violations aims at holding Nusra members accountable if they commit breaches against Syrians. The campaign uses the available legal methods at its disposal. For example, if a Jabhat al-Nusra member leaves the battlefield and seeks asylum in Europe, the campaign submits any documentation it might have on him to the state where he resides. The campaign maintains files on members still fighting in Syria in anticipation of the day when an independent judiciary can punish them.

Jawdat Malas, campaign leader, head of the campaign’s foreign media department and media activist, spoke with Al-Monitor in Gaziantep and via Skype. “In many instances, we unveiled the practices of some Jabhat al-Nusra emirs or relatives, and the organization put on a show, pretending to punish them,” said Malas. “But, these were mere acts that usually led to changing the position of the perpetrator without imprisoning them or dismissing them.”

The members of the campaign vow to continue their work against Jabhat al-Nusra, despite their scarce resources and the risk involved. This they do along with providing media and legal support for the activities of the moderate forces of the FSA and civil society organizations that share the same vision of making Syria a democratic country for all Syrians.