Sharia courts founded by armed groups in Syria are currently the sole judicial power in the areas outside the regime’s control. 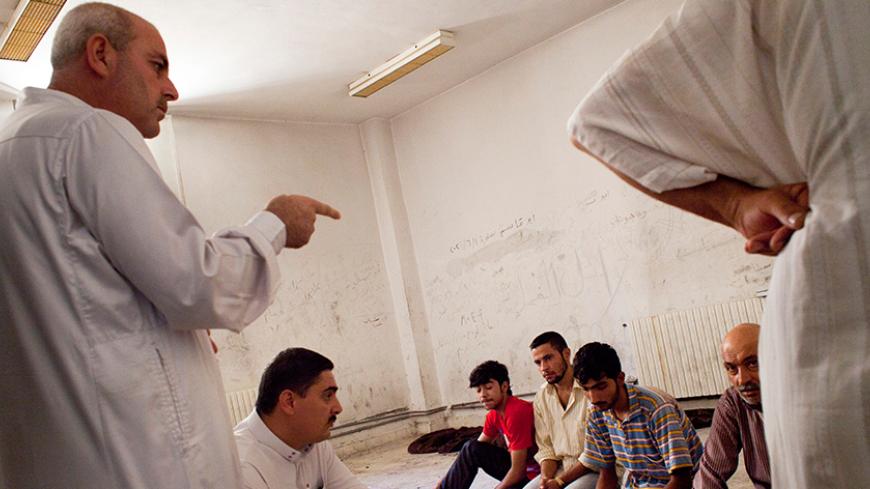 An Islamic Sharia lawyer visits prisoners at the jail of an Islamic court in the rebel-controlled town of al-Bab, northeast of Aleppo, Sept. 5, 2012. - ACHILLEAS ZAVALLIS/AFP/Getty Images

Five years into the revolution, different ideologies have begun to rule different areas of Syria. Some areas are controlled by the Syrian regime, others by the Free Syrian Army (FSA) and some by extremist organizations. These organizations established Sharia courts to rule the areas under their control, and they run them based on their own interpretation of Islam to solve everyday problems in the absence of legitimate judicial bodies.

Since the Syrian regime lost swathes of land — including large parts of Aleppo province in northern Syria at the end of 2013, as well as Idlib province in northwestern Syria in March 2015 — these areas have fallen under the control of rebel forces of different backgrounds and beliefs. Some factions, such as the FSA, aim to establish a civil state, while others, such as Jabhat al-Nusra, want an Islamic state.

In addition to losing all government services and living under the siege imposed by the regime, a major problem these areas faced was ensuring accountability and punishment. In Idlib, the city’s judicial system was paralyzed.

In a Skype interview, Ahmad Sulaiman, a former Idlib city employee who currently sells electrical equipment there, told Al-Monitor, “One of the main problems we face in the city of Idlib is the suspension of the judicial system by al-Nusra, which imposed the Sharia rule after the regime withdrew. Although it [the former judicial system] was never really effective because of the widespread corruption and favoritism, it did help in deterring violations and preserving security, to a point.”

In a recent telephone interview with Al-Monitor, Brussels-based Syrian civil rights activist Iyas Kadouni commented on the rise of Sharia courts: “The appearance of these courts is associated with the rise of Islamic groups holding sway in the areas outside the regime’s control. It is known that these groups reject positive laws and rely on Sharia law as the sole reference for the judicial power. This new status quo is natural but temporary, as it will not be able to meet the needs of the civil and democratic Syrian people.”

Kadouni added, “Sharia courts [will fail since] every faction has its own court that differs from the rest, because each one follows certain interpretations and references.”

These courts are reported to have been the scene of unfair, unlawful and retributional trials.

“My son was tried in one of Jabhat al-Nusra’s courts in the city of Idlib for having fought alongside the Hazm Movement, which is a faction within the Free Syrian Army. Such an allegation is punishable by death, and had we not been able to extract him via some of our acquaintances, he would be dead now,” said Abboud Sulaiman, the cousin of Ahmad Sulaiman, by phone from Istanbul.

Turkey-based lawyer Anwar al-Ahmad, who spoke by phone with Al-Monitor, offered a legal perspective on the ability of these courts to deliver justice: “Sharia courts in Syria are far from being just, especially since many Sharia committees include members with no academic qualification, either in the field of Islamic jurisprudence or in civil law. In addition, the fatwas and sentences delivered by each court are based on the school ... the court adheres to.”

Ahmad added, “In most cases, the hudud [Sharia punishments] are applied, although they should be suspended in the cases of poverty and need, which is what the Syrian people are currently suffering from. For instance, if someone stole out of poverty, he or she must not be punished, but these [Sharia] courts punish these people by cutting off their hands."

He added, “In the absence of the rule of law and with people resorting to the Islamic Sharia, justice is no longer served. Its application is now in the hands of armed individuals who act according to their own interpretation of the Sharia [and are] influenced by the school each adheres to, with no regard to the place and time, or to the state of poverty in which the majority of Syrians in rebel-controlled areas lives. And sometimes, using Sharia law is only intended to serve the interests of some fighters through exerting their influence.”

In January, Jabhat al-Nusra's Sharia court in Idlib executed a woman on charges of adultery, without executing the man who was involved or revealing his whereabouts. This points to a judicial mistake, as the other party involved in adultery was not present during the trial and the evidencial requirements in terms of eyewitnesses were not met.

Most Syrians agree there is no place in their country for such actions, and many think this is only a phase the country is going through due to the increasing violence.