Why Israeli president is no partner for peace with Palestinians

President Reuven Rivlin, who devotes himself tirelessly to the preservation of Israeli democracy, is lending his image to the perpetuation of Israeli rule over millions of people under occupation. 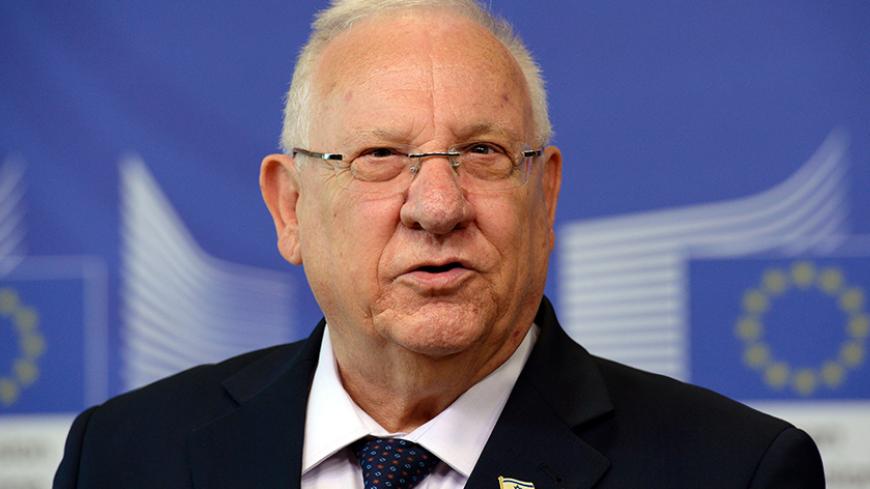 Prime Minister Benjamin Netanyahu could not have hoped for more: Within less than a week, two high-ranking leaders publicly sided with him. First, President Reuven Rivlin joined the ranks of the prime minister’s spokespeople. The popular Israeli president joined the campaign against Palestinian President Mahmoud Abbas. Netanyahu would have been hard pressed to articulate his opposition to the French peace initiative better than Rivlin did in his June 22 speech to the European Parliament in Brussels.

Five days later, Netanyahu completed the reconciliation deal with Turkish President Recep Tayyip Erdogan, Israel’s partner in the fight against the European Union. The end of the crisis with Turkey came just in time for the start of the long summer vacation. Masses of Israelis — Jews and Arabs alike — can once again flock to the all-inclusive Antalya resorts. It's the surest way to make them forget or forgive the price of the luxury hotels of which the Netanyahus are particularly fond and the controversy over the prime minister’s residences. Who remembers the critical comments made last week by former Defense Minister Moshe Ya'alon against Netanyahu at the Herzliya Conference and the combative appearance of former Prime Minister Ehud Barak on Channel 2?

The deal with Turkey includes an easing of the closure on Gaza, an important achievement for Hamas with serious implications for Abbas’ shaky standing. Let us focus here on the meeting that wasn’t between Rivlin and Abbas.

It’s hard to overstate the importance of their failure to meet. First of all, Rivlin, as everyone knows, is not Netanyahu’s yes-man or mouthpiece. The prime minister, after all, spared no efforts to prevent Rivlin from being elected president. The relationship between the two is somewhere between frosty and hostile. Therefore, there’s no suspecting the president of serving as the prime minister’s envoy of recalcitrance. Second, his views on equal rights, freedom of expression and Israel’s foreign relations have made him the darling of Israel’s liberal camp. Declarations that there’s “no Palestinian partner” by leaders considered moderate, such as Rivlin and opposition leader Isaac Herzog, are different from when the words are said by Netanyahu and Defense Minister Avigdor Liberman. I heard quite a number of leftist Israelis expressing disappointment in recent days over Abbas' refusal to meet with Rivlin.

Thus, with one meeting that did not materialize, Rivlin became a priceless diplomatic asset for the right wing. Abbas, who accused Israel of a heinous crime, supplied the icing on the cake that Rivlin served Netanyahu. He concluded his Brussels speech with a fabrication: "Just a week ago, a week, a group of rabbis in Israel announced, in a clear announcement, demanding their government, to poison, to poison, the water of the Palestinians.” (However, certain extreme rabbis have expressed that the killing of Palestinian babies can be permissible, and just this month Netanyahu celebrated Jerusalem Day alongside Rabbi Dov Lior, who preached in favor of expelling Israeli Arabs from their homes.)

Even after Abbas apologized for his remarks, the judgment of the Palestinian leader remains in question. Netanyahu may be missing opportunities for peace with the Palestinians, but you will never see him pass up an opportunity to lash out at them. "In Brussels, Abu Mazen showed his true face,” the prime minister announced. “Someone who refuses to meet President Rivlin and Prime Minister Netanyahu for direct negotiations and spreads … libel in the European Parliament falsely claims that his hand is extended in peace.”

Let’s assume that Abbas had agreed to shake Rivlin’s hand in front of the reporters and cameras. Would Netanyahu have said that the Palestinians were extending their hand in peace? After all, Abbas and even PLO leader Yasser Arafat have been meeting with Israeli leaders for 23 years. Even if Rivlin had adopted the views of his predecessor, Shimon Peres, he has no authority to offer the Palestinians a thing.

For years the Israeli public has been force-fed the idea that the importance of meeting with Palestinian leaders is in its very occurrence. Today, one can say that the importance of the meeting is in its non-occurrence. Such meetings with the Palestinian leadership, just as with other regional leaders, are not intended to advance a diplomatic arrangement as a substitute for the occupation. Such an arrangement is not in keeping with the Greater Land of Israel dogma that Rivlin openly espouses and with the positions that Netanyahu conceals behind hollow speeches. Meetings for the sake of photo ops convey a message of business as usual, as if to say that occupier and occupied can clearly co-exist.

And if it ain’t broke, why fix it? “You can see clearly,” opponents of such an agreement would say, “Abbas is even willing to meet with an Israeli president who the day before declared before the European Parliament that there’s no effective Palestinian leadership and that negotiations on a permanent agreement are doomed to fail.”

It’s too bad that a president who dedicates himself to preserving democracy within the State of Israel is lending his prestige to perpetuating Israel’s rule over millions of people under occupation. Surely he knows that if Israel does not annex the West Bank territories, it will cease being a democratic state, and if it does annex them it will no longer be a Jewish state.

As I have written previously, Rivlin’s moral authority in preserving Israel’s democratic values has been priceless. When I urged him, “Run, Ruvi, run. The people of Israel are behind you,” I did not mean for him to run into the arms of those who oppose peace with the Palestinian neighbors. If he wishes to meet “effective leaders,” Erdogan will surely be pleased to host him at his palace. With him, we have already reconciled.